The Curator of Schlock #163 by Jeff Shuster

Being a Curator of Schlock isn’t all sunshine and lollipops. Which is a shame because John King promised me sunshine and lollipops! Sometimes watching these flicks is a real burden. It’s like in that Batman Killing Superman movie that came out this year. Superman wasn’t having a good time rescuing people. Come to think of it, no one was having a good time in that movie save for the movie’s main villain, Mark Zuckerberg.  And I’ve never seen Batman so angry.

Speaking of bats, I’ve got another Dracula movie to discuss with you. This one is 1972s Dracula A.D. 1972 from director Alan Gibson. The movie starts out with Count Dracula (Christopher Lee) and Lawrence Van Helsing (Peter Cushing) fighting a duel to the death on an out of control horse and buggy. The carriage crashes, the two of them getting tossed off. I think Van Helsing manages to stab Dracula in the heart with one of the spokes from a broken wheel. Dracula turns to dust and Van Helsing dies from his injuries.

Fast forward to A.D. 1972, and we know it’s A.D. 1972 because of the huge jet airplane flying in the sky. Okay. I’m on board so far, but then the hippies show up. Yes, we in the audience are treated to the splendor of a swinging shindig, replete with hippies, folk singers, go-go dancers, and other counter culture nonsense. The whole affair is taking place at some rich kid named Charles’s penthouse apartment. His parents are not amused. The hippies are eating all of their food, breaking family heirlooms, and I won’t even tell you what they’re doing under the dining room table. 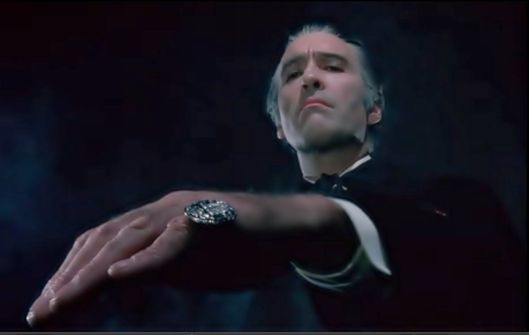 This is unacceptable! Charles’s parents and other associated high society people look on with disgust, as I’m sure most Millennials would. Charles is a good lad. He calls the police, what the hippies refer to as “the fuzz.” The cops show up and the hippies disperse, but not before their leader, Johnny Alucard (Christopher Neame), taunts Charles’s mother by breaking one of her rare, Chinese, porcelain statues. If you were hoping the rest of the movie would be about Charles hunting down a replacement statue for his dear mum, I’m here to dash your hopes. This is a Dracula movie after all, or so the title says.

One of these young hippies is none other than Jessica Van Helsing (Stephanie Beacham). How the great, great, great, great, great, granddaughter of Lawrence Van Helsing got caught up with this crew is beyond me? Especially, since Johnny Alucard wants to hold a “black mass” for their next party. I really don’t like this guy. He looks like he came right out of A Clockwork Orange. Jessica stops by her grandfather’s place because he’s an expert on the occult. His name is Lorrimer Van Helsing and is played by none other than Peter Cushing. He catches her reading a book on the black mass. Jessica tells him it’s just a “quiet bit of mind blowing.” He tells her the black mass is nothing to mess around with. Do you think she listens?

So Jessica’s gang meets at an abandoned church that’s scheduled for demolition. Johnny Alucard calls out the names of several demons including that guy Astaroth. These damn hippies and their Satanism. They end up resurrecting Dracula! 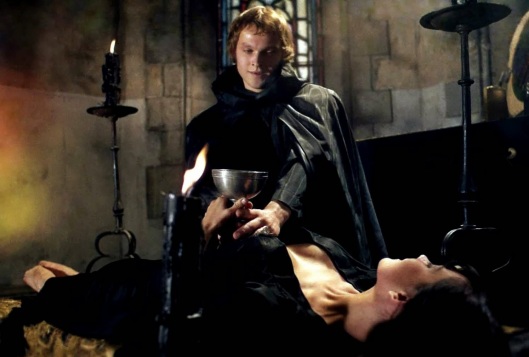 The count wants revenge on the Van Helsing family for turning him into dust one hundred years prior. Will Dracula succeed? You’ll have to watch the movie to find out. On major disappointment is that Dracula never bothers to leave the abandoned church at any point in the movie. It’s 1972. Doesn’t he like the nightlife? Doesn’t he like to boogie?