Comics Are Trying to Break Your Heart #10 by Drew Barth

In writing all of these articles so far, I mostly discuss the cool new thing. Yet on more than none occasion I have heard “But what about series that aren’t new? What about a series that’s been going on for a while now that isn’t Saga?” For those imaginary readers, I wanted to step back from what is just emering and take a look at a series that has been ongoing for close to six years now: Johnathan Hickman and Nick Dragotta’s East of West.

Anyone familiar with Johnathan Hickman’s work over the past decade will note that East of West carries so many hallmarks of his work: the white space, the consistent design element, the large, expanding cast of characters, and a nebulous story with a driving force at its center. These strains appeared in Pax Romana, The Nightly News, and Transhuman. But those series were fairly short, four to six issues a piece, while East of West has been running for over forty issue. While its publication schedule can get a bit spotty, the quality of the comic has never taken any kind of a dip. 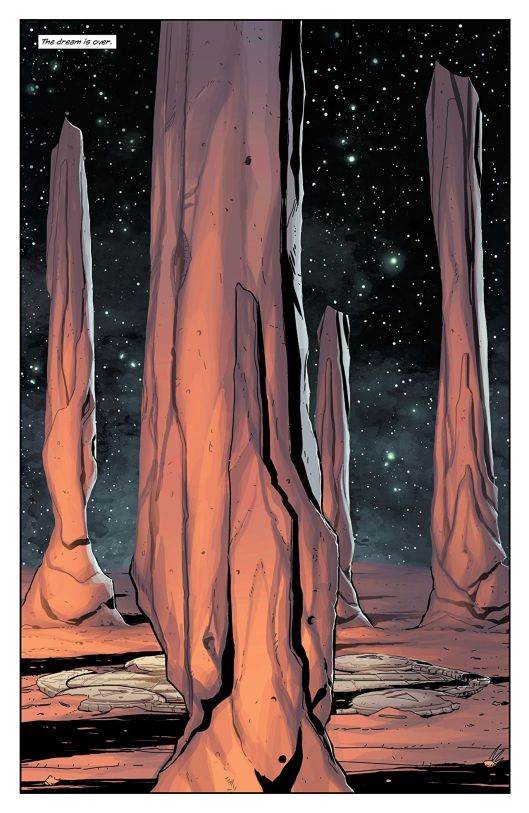 East of West is about the oncoming end of the world, a grand vision of the apocalypse as perpetrated by the political insiders who would benefit most from the world plummeting into chaos. It’s hard not to see a contemporary analogy when the story’s less ambiguous villains are obsessed with a religious doctrine that foretells the coming doom. A summary of the story itself would seem like a fifteen year-old’s post-1984fever dream, but Hickman and Dragotta have been able to craft this finely-tuned pre-apocalypse story that can mirror, sometimes uncomfortably, what we see on the news.

East of West is also a story about a man looking for his son. That man is Death of the Four Horseman of the Apocalypse and his son may or may not be the Anti-Christ. Hickman is one of those writers that have this uncanny ability to make readers empathize with characters that may not deserve our empathy. Death’s journey has been long and arduous. We see it every issue where he claws his way through the American desert on scant trails for where his son may be held. It is through those failures and, at times, his reluctance to embrace his role as Death that Hickman builds that empathy. Death may be the ultimate doom for this world, but we want him to be happy.

We also can’t talk about East of West without also mentioning Nick Dragotta’s artwork and the marvel of silence he’s able to bring to the story. Many issues that deal with Death in some way almost always have this wonderful sequential narrative trick of silent scenery panels. These panels are establishing shots, mood makers for the rest of the story to come, and give the reader time to breathe or fully immerse themselves into the story. And moments like the one featured below are absolutely necessary. East of West is a loud book when the moment calls for it. Things explode. Many things explode when we’re hitting the climax of an arc, but Dragotta makes sure we’re given these crucial moments to give readers a bit of distance and calm. He’s well versed on hitting the peaks and valleys of a story, and every panel he creates only bolsters those points of tension.

After six years, East of West is hitting its final arc and it’s going to be weird no longer seeing it on new comic shelves every week, but its ending is absolutely well-deserved. Also well-deserved is the fact that East of West has been picked up by Amazon Studios to be developed into a TV series.

Get excited. The end is coming.

Episode 356 of The Drunken Odyssey, your favorite podcast about creative writing and literature is available on iTunes, or right click here to download.

In this week’s episode, I talk to fiction writer Chad Anderson near the end of his residency at The Kerouac House here in Orlando, Florida. We spoke about the importance of memories, including lost ones, in the creation of our realities (and the fictions representing those realities), the complications of family, the glory of a long residency, and Washing DC as a writer’s city.

Chad Anderson at The Kerouac House, photographed by John King. 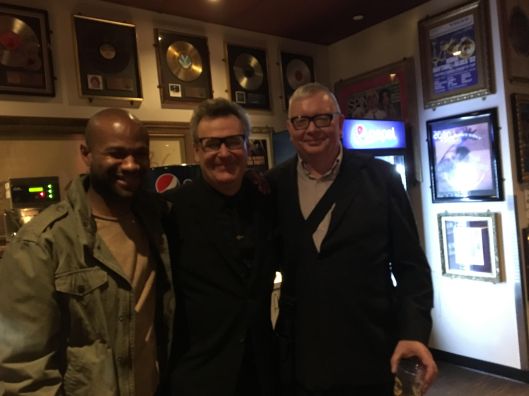 Chad Anderson, Greg Proops, and moi backstage at the Hard Rock Live at Universal Studios, Orlando, in the apex of show business moments for your humble Drunken Odyssey.

Check out Whose Live Anyway, in which the Whose Line is it Anyway cast improvs the hell out of a stage near your, probably, eventually.

Or Check out this farewell reading from Eleanor Matthews, the resident before Chad.

Come hear me pontificate with some wiser writers than I am at AWP!

Episode 356 of The Drunken Odyssey, your favorite podcast about creative writing and literature is available on iTunes, or right click here to download.

The Curator of Schlock #263 by Jeff Shuster

I’ve got nothing prepared this week. Digging up schlock from decades upon decades of film is hard work. I took a break and went to movies, went to check out the latest James Cameron milestone, Alita: Battle Angel. Not that James Cameron directed it, that duty fell to Robert Rodriguez, but whatever. I’ve liked his movies, too. He directed Planet Terror, a movie that spoofed that much-revered classic, Nightmare City. Without Planet Terror, there may not be a Museum of Schlock, so kudos.

But Alita: Battle Angel isn’t schlock, but perhaps it has schlock origins? The Merriam-Webster dictionary defines schlock as “of low quality or value.” Certainly Japanese animation was at one point considered to be of low quality or value. Maybe it was because Japanese animation studios toiled under greater budgetary restraints than that of their American counterparts. Maybe it was because they didn’t hit the number of frames per second that their American counterparts strived for. Maybe it had something to do with anti-Japanese sentiment that was still rampant in the 1980s, a holdover from World War II. I used to hear the term “cheap Japanese cartoons” being tossed around when I was a kid, no doubt intended to discourage kids like me from watching Robotech or The Mysterious Cities of Gold. It didn’t work. 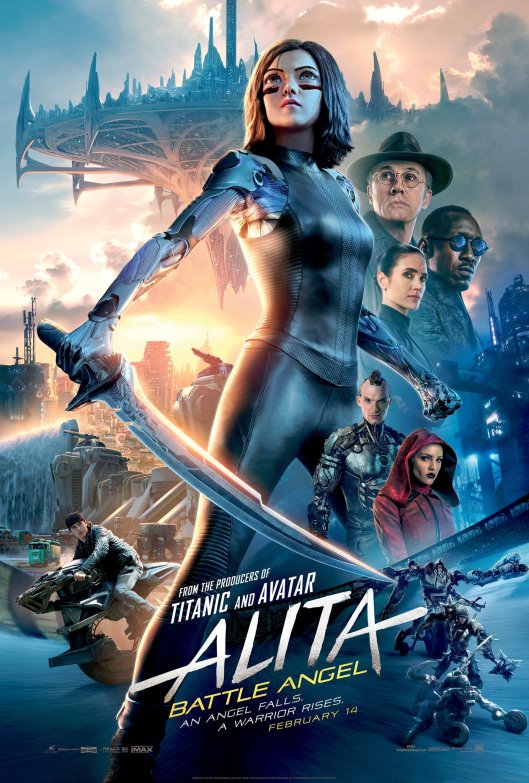 But being into Japanese animation was strange. Heck, being an adult who was into American cartoons was considered strange, but being into exotic cartoons from the Land of the Rising Sun? Forget about it. There were no fandoms back then except for Star Trek fans. No conventions or cosplay–except for Star Trek fans. I didn’t have Internet access until 1995. There was no connecting with people of similar weird interests. You got little exposure to things outside of the mainstream, having to rely on word of mouth and friends brave enough to fork over money for expensive VHS tapes featuring the latest in state of the art Japanese animation. One day, a friend loaned me a VHS tape titled Battle Angel Alita.

Battle Angel Alita was what was known as OVA in Japan. It’s an abbreviation for Original Video Animation. This was animation produced solely for those purchasing it on VHS or Laser Disc. These were usually limited series featuring animation of a higher quality that what was made for television. OVAs are notorious for being unfinished. In just two 30-minute episodes, Battle Angel Alita introduced me to a teenage girl cyborg fighting for justice and survival in a scrap-heap city lorded over by a city of elites that floated above them in the sky.

I think it was after Titanic got released that James Cameron said he was going to make a movie based on a Japanese comic book titled Alita. While I appreciated that Cameron was a fan of this underground comic, I never expected this project to get off the ground. Never in a million years did I expect an adaption of some VHS Japanese animation I borrowed from a friend in the mid 90s to be turned into a movie with a huge budget, state-of-the-art special effects, and an all star cast. And the movie is great, the best blockbuster of the year. Stop reading and go see it. I want a sequel.

And we will be covering anime features from the 1990s for the rest of this month. Until next week.