If you watch enough entertainment, you realize all stories are the same. Godfather is Game of Thrones; Conan is Django Unchained; and Goodfellas is Scarface. It gets to a point you can predict how a story will turn out without seeing it. Blake Snyder, the avatar of banality, took the predictability of narrative and broke it down to a science of the safe and boring. What differentiates stories is how they are executed. The Revenant is about typical survival, but it was shot artistically and it had spiritual themes. Inglorious Basterds is about revenge while paying homage to classic WWII movies. The same case could be made for most video games, like Dishonored.

You play as Corvo, the personal bodyguard of the Empress of Dunwall and the possible father of her daughter Emily. After the Empress is murdered, you are blamed for her death and put in prison, while a tyrannical regime takes over. Before long you are freed by a mounting resistance movement and embark on a quest for revenge. After effectively assassinating members of the new government, the resistance attempts to kill you for fear you will interfere with their plans and takes Emily for themselves.

While the story fits the bill for many revenge narratives, the game uses it as a jumping off point for some great gameplay. Dishonored is from Bethesda and player choice is an important element in all their work, most notably their role-playing. This time, in addition to having your choices affect the story, how you play affects the world.

Taking note from Dungeons and Dragons, there are two states of gameplay: low chaos and high chaos determined by what you do in each mission. This includes how many guards and other persons you kill, how you approach side objectives, and how you deal with the main target. There are always two ways to dispatch a member of the regime: easy and passive. They die like any other enemy so a good bolt, bullet, or knife in the head will do the job just fine. However, there are always opportunities to get rid of them in a way that will keep your body count low or nonexistent depending on how you play. These methods are more difficult, but they help maintain a low chaos rating. 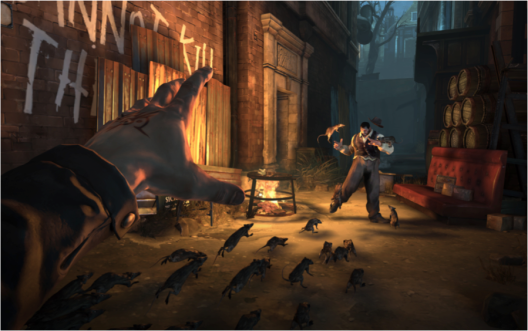 How you proceed through missions is up to the player with each level and tool designed for versatility. If you want to be a ghost and not kill anyone, there are passages, windows, perches you can use to traverse Dunwall like a proper assassin. If you want to go loud and nasty, you have a small arsenal worth of lethal equipment. You possess supernatural powers like teleportation to assist you in either method. There are also various traps spread throughout levels that can be hacked to turn against guards. Exploiting your abilities is a part of the fun as you mix and match powers with your equipment to achieve objectives or just have fun. I think I had the most enjoyment playing Dishonored thanks to its freedom and the available abilities.

Each play style has a clear difficulty curve that will increase or decrease. Low chaos will encourage guards to stay alert, but high chaos will make them more aggressive, employing all manner of offensive measures. Chaos rate also determines the severity of the in-game plague, a rat-borne sickness. The more people you kill, the more visible the plague becomes as swarms of rats and infected citizens fill the streets. The way characters react to you will change where people see you as a hero or vilify you for being a mass murderer.

The art style is the most interesting aspect of Dishonored. Like XCOM, its aesthetic is characterized by deformity, but in the context of an old Popeye cartoon. Guards and thugs are ape-like with barreled chests, large arms, and heavy brows, while the aristocracy is thin, tall, and narrow with regal features. The only character that looks like a normal human is Corvo. The rest of the game is arguably steam-punk with a lot of modern touches. While many of the buildings and the general architecture is Victorian inspired, the vehicles, technology, and authority-based elements like guard posts and weapons are angular, ridged and metal, usually colored in light gunmetal black. Cars operate on train rails and the Tallboy enemies walk around on robotic stilts as they shoot you with arrows. The way things move is mechanical and jerky as gears crank and scrape with the sound of metal on metal while running on whale oil for fuel. The clothing is reminiscent of late 18th century Britain with a lot of coats decorated in gold stitching with breeches and tall leather boots. Everyone looks like a pirate, but it works well with the overall aesthetic.

These days, originality is hard to come by. With the mass influx of reboots, remakes, and sequels, one must take what they can get. The story of Dishonored nothing new, but how it uses the revenge story as a means to build upon good gameplay makes it worthy of consideration. If you do not mind not being surprised by twists and turns you have seen in every story ever, you will have a great time getting revenge in the streets of Dunwall.