Comics Are Trying to Break Your Heart #116 by Drew Barth

Where were we the last time Peow released a volume of their Ex.Mag series? Oh, right, a decade ago in terms of major historical events. Cool. But hey, comics! Ex.Mag is now finishing up its three-volume run with its final volume, Crumbling Kingdom, and it delivers on everything we have come to expect from the anthology series since its Kickstarter campaign last year. Thus far we’ve had cyberpunk and paranormal romance as themes and this volume is no exception with its lens being turned toward dark fantasy.

Fantasy as a genre is already fairly broad—some authors have argued most science fiction is just fantasy with lasers—but to step into a darker fantasy is to take up a different kind of story. Many of the works here deal with things like mad kings, giant mimics, and eternal murder as a divine punishment. With creators like Linnea Sterte, Patrick Crotty, and Delfína Pérez Adán featured in this volume, that darker fantasy is even imbued with a kind of wry humor—a pair of treasure hunters attempt to rob a traveling priest only for the priest’s cart to come to life and devour them both; a wizard is called upon to heal a great hero but overstays his welcome; an assassin takes on a dangerous job to earn food but instead spends their money on new armor. These are the kinds of stories that can dip into those darker spaces, but the creators know when to pull back just enough. 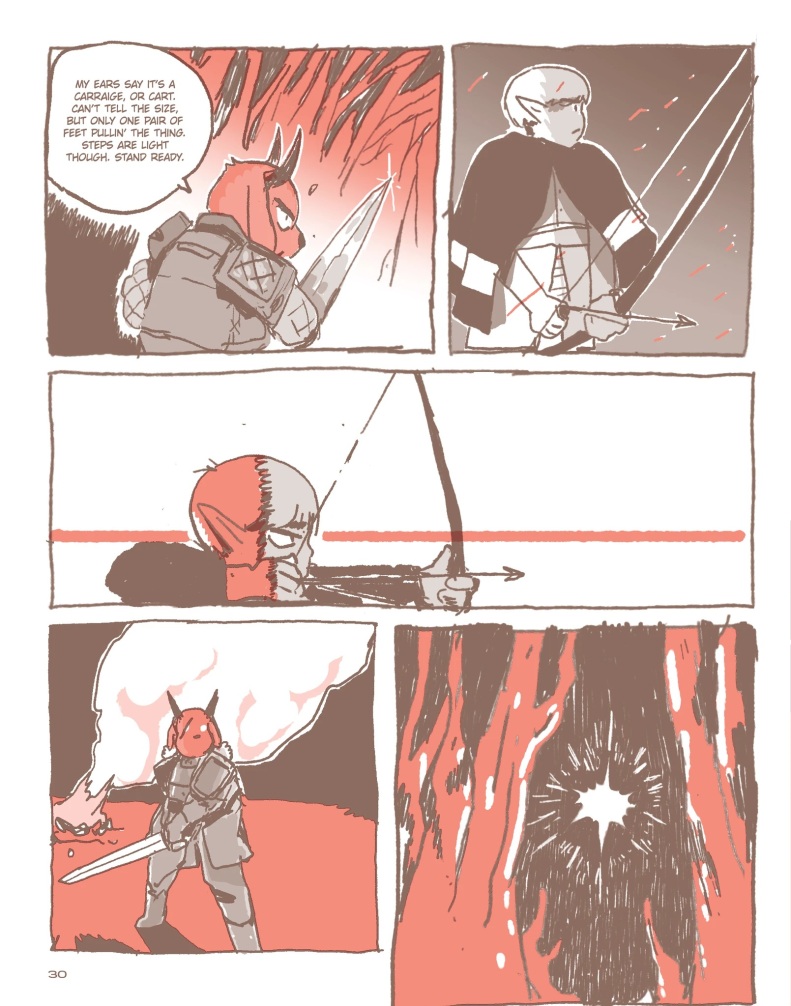 What this volume does really well is something I really enjoy in fantasy but see rarely: the cataclysmic event has already happened and the characters are just left to sift through the rubble. There’s no massive fight to stop the apocalypse and no real heroes anywhere as that age has already passed. All of the stories included here are among those crumbled and ruined kingdoms and temples with characters that are either just getting by or have become irreversibly warped by their circumstances. In a fantasy setting, if there’s nothing left to protect or quest after, what is left for anyone to actually do? For the most part, not a lot. But that’s where the character work in these stories really soar as so much of their motivation is just in finding what to do with themselves among the ruins of a world they never knew.

To see a series of anthologies like Ex.Mag end is sad as they’ve included some of the strongest short comic work to come out in the last year, but that only gives us an opportunity to celebrate this work and hold up the creators featured within as some of the shining lights in contemporary comics. That’s one of the best things about anthologies—seeing creators whose work you’re not familiar with get you even more excited about comics. I can only hope for another series to come soon .
Get excited. Get dark.