Within these fifteen stories, a girl sews the stripes back onto tigers, a boy can’t recognize faces, a teacher attempts to explain the origins of the universe, and mysterious, yet ordinary, objects keep appearing in one American family’s home. Aimee Bender is well known as a fabulist, magic realist writer and one of the masters of the short story form. The Color Master is Aimee Bender doing what Aimee Bender does best.

There seems to me to be less world creating in this collection than in some of her earlier work. Instead, the stories are often presented with individual magical elements attributed to particular characters (who are living in the world as we know it), more Bender’s bestselling novel The Particular Sadness of Lemon Cake. In fact, a few stories in the collection—“Lemonade,” “The Red Ribbon,” and “On a Saturday Afternoon”—while quirky, lack any traditional fantastic elements at all. Yet, like Bender’s strictly surrealist fiction, these stories are told in a style often attributed to fairy tales. The plotting is face-paced and the language is matter-of-fact, but the overall effect of the stories is that they are weighty and important; despite their quirks, Bender’s stories feel classic.

“Origin Lessons,” is a four-page story told in the plural first person from a group of school children eager to know how it all began, origins of life and the beginning of the universe. The story, again, is not does not literally contain “magic,” but the telling is whimsical and elements of space—its expanding and accelerating, matter and radiation—so foreign to the students it may as well be spells and wizards. In the story, the students struggle to comprehend the rules of the universe by comparing them to familiar images and symbols: suitcases and brides. The story, then, becomes a larger metaphor for storytelling itself. Aren’t writers all trying to find the familiar images with which to express love, grief, desire…all the greater elements of life? Isn’t our limited language at once frustrating and beautiful?

Pair with: 95 beer steins at the ogre tavern

Find THE COLOR MASTER now at your local independent bookstore or buy online at Powells.com.

Taking Setting off the Sidelines 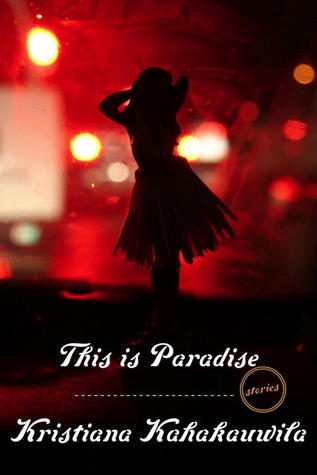 Many authors, from James Joyce to Annie Proulx, have used place as a device for linking stories. Debut author Kristiana Kahakauwila follows in that tradition with six stories set across the islands of Hawai’i in her new collection, This is Paradise.

This is Paradise as a collection explores, as you may expect, themes of home, tourism, race, authenticity, and “outsiders vs. insiders” (both within the context of a community and individual families). All of these issues spring from a natural tension built into the setting.

Kahakauwila utilizes setting in her stories in every possible way. Maui, Oahu, and Kaua’i are as layered and complex as the most important characters. And characters respond to their surroundings by either like feeling that they deeply belong, or that they never will. In “Wanle,” the main character is woman who has followed her father’s path of cockfighting. Like her father, murdered years ago, she raises, trains, and fights her birds with great dedication. Like her father, she speaks pidgin. Her motivation comes from notions of both honor and revenge, notions tied strongly to heritage and place. To understand this character, it is critical that we, the reader, understand where she is from. And when her lover asks her to give up cockfighting, corrects her English and asks her to speak differently, “properly,” the reader needs to understand the importance, not just of family, but also of home and place to understand what this character’s lover is really asking her to give up.

The title story is told in a wonderfully original and complex structure: in the plural first person from a variety of groups—young surfers, hotel workers, and businesswomen heading home from work as they independently observe and cross paths with a tragic young tourist. The three groups allows the reader to see Waikiki through three distinct points of view, and the beautiful beachfront neighborhood transforms from a daytime oasis, to an everyday place of business and commerce, to a place with a dark nightlife, and finally back again. In the end, of course, Waikiki is not simply one of these places, but all of them at once—and often at odds with itself.

Setting does not just offer characterization and put our characters feet on Earth, it can work to raise the stakes. Setting, a story element too often ignored, can serve as the central conflict.

No matter where the story is set, I’m excited to read whatever Kahakauwila has in store for readers next.

Pair with: the Crown Royal found in Junior’s refrigerator

Find THIS IS PARADISE now at your local independent bookstore or buy online at Powells.com.

Why all Writers Should be Paying Attention to Young Adult Literature

I first took note of Aristotle and Dante Discover the Secrets of the Universe during the ALA awards last winter, when it won the Pura Belpre Award, the Stonewall Book Award and was named as a Printz Honor Book. I have been trying to inject more young adult literature into my reading—a good part due to the direction of my latest manuscript—but also because of the general excitement surrounding the genre. During my tenure as an independent bookseller, I saw YA as a continually growing genre—both in the store, and as publishers expanded, or developed, their YA imprints. With YA, I witnessed reluctant readers, both young and old, engaged with fiction, at the same time I was observing regular readers enthusiastically consuming YA titles. More so, I have been inspired by authors such as Kelly Link, Jack Gantos, Sherman Alexie, Laurie Halse Anderson, M.T. Anderson, and Chris Lynch (to only name a few) as they push the limits of genre, delve, without fear or hesitation into difficult and dark topics, and stay true (or perhaps finally return) to the cornerstone of fiction: story.

Yet, despite all this excitement, there seems to exist a general notion that young adult literature lacks substance, or merit on a prose level, and I suspect this comes from the enormous popularity (and promotion) of a handful of “blockbuster” titles: from The Hunger Games, to Twilight, to Pretty Little Liars. Books like these, big screen ready and seemingly published with pre-conceived tie-in merchandising, are not indicative of the genre as a whole. (This is not, of course, to malign the many wonderful books that find a larger audience through film or television or to suggest they are inherently inferior to other, perhaps more obscure, literary titles.)

What I mean to say it that Bejamin Alire Saenz’s award winning Aristotle and Dante Discover the Secrets of the Universe is not “just” a fantastic YA novel, it is a fantastic novel. Ari and Dante, the novel’s young protagonists, are two very different, but compatible, outsiders who find a strong friendship in one another. As characters they are undeniably likeable—two, self-proclaimed “nice guys”—a story-telling element that is deceivingly difficult to pull off. They each come from in-tact, nuclear families, and while the parents, especially Ari’s, are flawed, they are engaged and deeply loving. In this way, Saenz did not allow himself any “tricks.” Aristotle and Dante…is a straightforward love-slash-coming-of-age story, which utilizes impeccable characterization, fine pacing, and accessible (while interesting) prose that any writing student would do well to pay attention to, or enjoy, simply, as pleasure reading.

That said, I do think that setting the book in the late 1980s is something of a cheap trick to avoid addressing new communication technologies such as text messaging, emails, facebook or twitter—especially as these mediums pertain to teenagers. While it could be argued that setting the novel in the 80s raises the stakes on the topic of homosexuality, it is not beyond reason to think teens in the last twenty years have an equally difficult time coming out, as is presented in the book.

Which is to say, too, that the book is relatable—and not only for gay teens, although I do imagine a book like this can—and surely has—offer a considerable amount of comfort to a young person struggling with his sexuality.  And isn’t comfort an important aspect of literature, especially young adult literature? Stories don’t need to be comforting to be worthwhile—but is there such a thing as a book-lover who has never sought comfort in his favorite novel or poem?

What Aristotle and Dante Discover the Secrets of the Universe delivers is what readers most often crave: beautiful sentences, characters to root for, and a story that keeps you turning the page.

Pair with: your first beer

Find ARISTOTLE AND DANTE DISCOVER THE SECRETS OF THE UNIVERSE now at your local independent bookseller or buy online at Powells.com.

Recommendation: Bobcat And Other Stories by Rebecca Lee 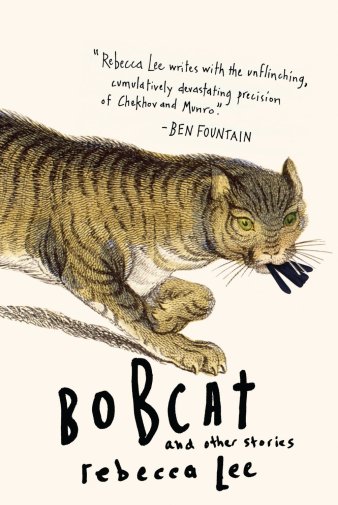 Bobcat is a collection of seven short stories so rich and expansive they leave the reader walks away feeling she has read seven novels. Rebecca Lee manages to fit an amazing scope in each story, both through breadth of time and depth of character. Such an ability has earned her (rightful) comparisons to Alice Munro, but I would argue there are stronger similarities to short-story writer Amy Hempel. It is not just Lee’s inclination to use first person (each story in Bobcat is presented in first person, and the vast majority of stories throughout Hempel’s career are written in first person point-of-view as well), but her ability to reveal a kind of truth. Truth with a capital “T.” The undeniable yet often ignored observations of the little things that make us human.

Lee is not afraid to allow her characters to be intelligent—the stories are full of lawyers, professors, writers, architects and students. And since each story is presented through a first-person narrator, one would be correct in assuming the stories are, in fact, smart. This is not to say the work is littered with little-known literary allusions, is unnecessarily convoluted, or is held down by a kind of high-brow, academic snobbery. No, the stories here are both intelligent and accessible. Lee respects her characters (and therefore, her readers) enough to give them actual, working brains.

The collection opens and closes with two very different stories, each revolving around dinner parties. Lee deftly handles multiple characters in the same room, so that the reader is never confused about keeping everyone at the table straight—a feat in itself. Her dialogue is superb. Take these lines, from the title story:

“We’re not prepared at all. We just found out yesterday at our Lamaze class that we’re supposed to have a theme for our nursery.”

“How about alienation in the technological age?” Ray said.
“Hollywood under McCarthy?”

“It’s going to be Winnie the Pooh,” John said, which was true. Everyone seemed a bit dejected that John was closing down the joke so early, but he made a recovery. “Winnie the Pooh and the Reconstructed South,” he said.

These are not simply stories about people sitting around and talking, although sitting and talking do occur, it is what is brewing and bubbling under the surface—what people don’t say, lies they tell each other and themselves, incorrect assumptions, deep desires, fears and regrets—which are the meat of the stories in Bobcat.

In “Fialta,” a famous and celebrated architect describes what building “ought” to be composed of: “Even the simplest buildings, he said, ought to be productions of the imagination that attempt to describe and define life on earth, which of course is an overwhelming mix of stability and desire, fulfillment and longing, time and eternity.”

It is these characteristics precisely that make Bobcat the beautiful book it is.

To be paired with: Sugar Gin

Find BOBCAT now at your local independent bookseller or purchase at Powells.com.

Alise Hamilton earned her MFA from Lesley University and holds a BFA in creative writing, literature, and publishing from Emerson College. Her short fiction appeared in the Francesca Lia Block-edited anthology Love Magick.