Comics Are Trying to Break Your Heart #92 by Drew Barth

The creative force of Jack Kirby is the lifeblood of modern comics. His influence can be felt in every monthly comic coming from DC or Marvel and in nearly every superhero movie in this century. His aims were cosmic in scale and even grander in ambition, but at no point did his work ever escape the core humanity that was imbued within his pencils. And while we can wax poetic about Kirby’s galactic and superhero work, it is Halloween season, so it’s time to dive into one of his spookier creations that has become a staple of the DC Universe: The Demon, Etrigan.

Who is this Demon? Etrigan was spawned from the words of Merlin as Camelot fell to the sorceress Morgaine le Fey. This Demon would be the protector of Merlin and Camelot as Merlin’s magic entombed himself and his Eternity Book away from le Fey so that her magic would fade with time. But, of course, that doesn’t happen. We’ve passed the time of ancient kingdoms and into the 70s where demonologist, Jason Blood, is researching the origins of a mysterious piece of parchment that has been in his family for hundreds of years and how it affects his fate. And so the words on the parchment help to bring forth The Demon, Etrigan and Morgaine le Fey is still around searching for Merlin’s Eternity Book. All of this, as is typical of Kirby’s work, is only in the first half of the first issue of The Demon series. 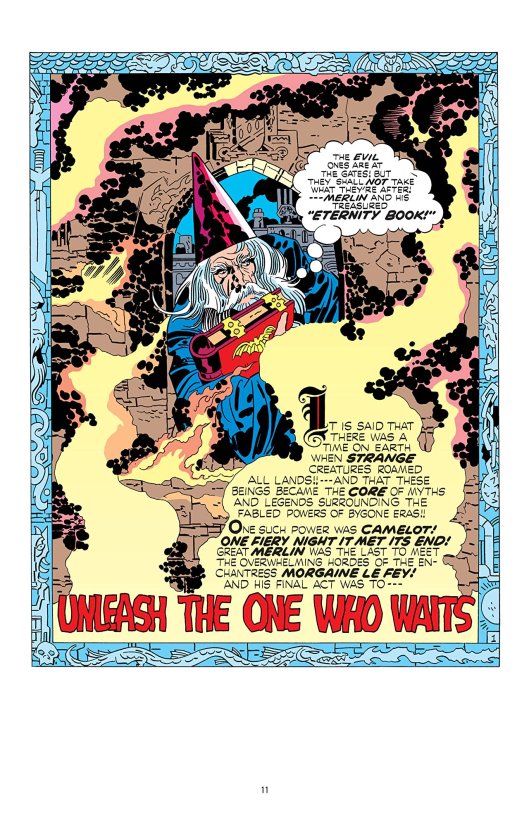 Kirby’s The Demon came at a time when Kirby was deep in his Fourth World series. DC, at the time, were looking to expand into some more weird adventures like The Phantom Stranger and House of Mysteryand asked Kirby for his best takes. Kamandi, The Last Boy on Earthand The Demonleapt fully formed from his imagination onto the page—the latter over dinner with his wife and assistants one night. So much of The Demonis steeped in Kirby’s endless imagination—from stories playing off The Phantom of the Operato the twisted magics of Klarion, the Witch Boy, every issue feels as though it could have been its own series. They wanted weird adventure, and Kirby gave them great adventures in the medium. 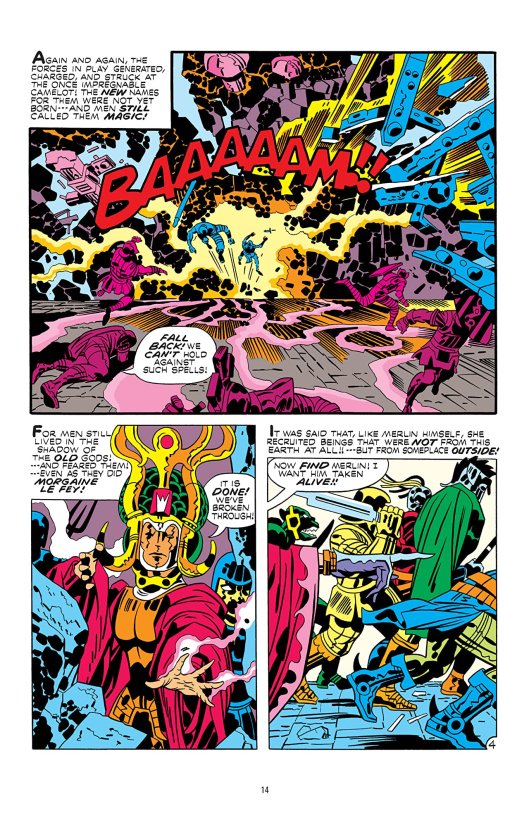 The Demon stands as one of Kirby’s greatest storytelling achievements. As characters, Etrigan and Jason Blood fit so seamlessly into the fabric of the DC Universe it’s hard to imagine the canon without them. And even with a series and a character born from the from the fires of hell, our protagonists still carry with them that essential Kirby humanity and compassion. At his scariest, at the most gruesome, it’s hard to be scared reading through a Kirby comic because there is that ever present feeling of safety in his panels. He believed in the triumph of heroes, no matter their origin, and The Demon is one of Kirby’s greatest triumphs.

Get excited. Get gone, form of man.