In the late 1960s, a few years after the creation of the Marvel Universe, an edict was passed down to the comic creators that there should be only the illusion of change. There was a lot of money to be made with these characters, so, in some ways, they were frozen. The characters would never come to an end. In 2002, Marvel began The End series—comics depicting the end of certain characters and created by a writer and artist who had famous runs on the character before. Some of these, like Iron Man: The End and Incredible Hulk: The End, are one issue long, while others, like Wolverine: The End and Fantastic Four: The End, are six issues long. The longest is X-Men: The End, which is 3 six-issue mini-series. The best of The End comics, in my opinion, is Daredevil: End of Days, written by Brian Michael Bendis and David Mack, with art by Klaus Janson, Bill Sienkiewicz, and Alex Maleev. Many comics I’ve read that feature multiple artists end up awkward on the page, but Janson, Sienkiewicz, and Maleev, along with the writers, make the comic flow, with the change of art style always making sense. Also, unlike other comics in The End series, Daredevil: End of Days is considered to be canon, the actual end of the character. 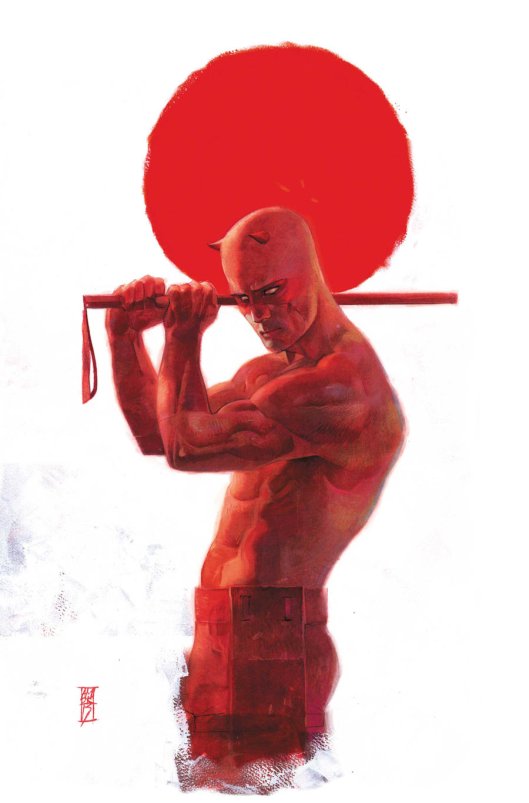 Now, the problem with a comic stating from the outset that it will show the end of a certain character is that there may not be much tension. The reader knows the character will die or leave their superhero identity behind by the end of the series. If not, the reader may feel ripped off, tricked. Daredevil: End of Days solves the problem by killing off the hero in the opening scene. And not in a way that has the character jump into a building that explodes soon after. The reader is shown in great detail the death of Matt Murdock.

Pacing is this series’ best friend. Honestly, this is one of the most well-paced comics I’ve read in years. It opens with a full page shot of a close-up of Daredevil without his mask getting punched in the face. Comic fans will recognize the assailant by his white gloves as Bullseye. The inks on the image are heavy, making the fight look dirty and violent. Daredevil’s eyes are shut tight, or swollen shut.  In the top left, with great placement, is a single small caption. “They say the fight itself lasted over an hour and forty-five minutes.” That’s all the reader gets on that page. The striking image stops the reader, who immediately feels the weight of the situation. 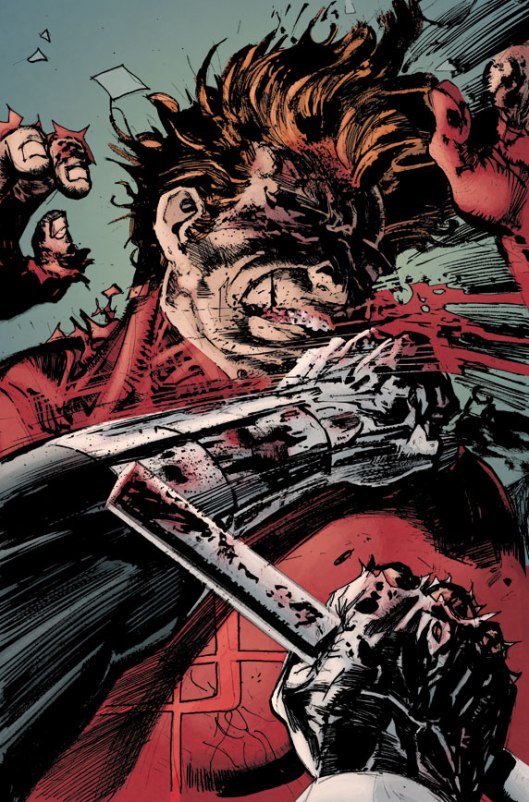 The next two pages feature a variety of panels showing the fight continue.  Very little text is given to keep pacing up. On the top of page two, both characters stand beyond the panel’s confinement. The fight is like none before. They even break panel rules. Both characters are torn and bloody. The beaten Daredevil’s big defense is to throw a box poorly at Bullseye.

As the fight rages on, pedestrians snap photos and record video.

Pages four and five are one shot. Just in case anyone doubted we’d be shown the death of Daredevil, he’s killed, clearly and absolutely.  Swinging from left to right to allow the image to flow from one page to the next, Bullseye takes his stick and slams it through Matt Murdock’s head. We clearly see the stick come out the other side. Brains, blood, and dirt explode to the right.

In the background, cameras go off. A crowd has gathered. 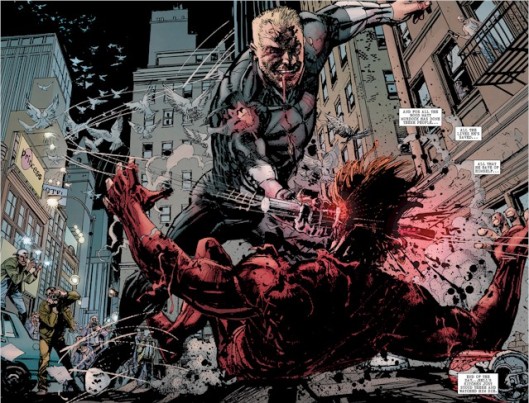 The comic opens with the death of the title character.

Bendis and Mack have my interest. I have no idea where this story’s going. We don’t even know why the two were fighting.

Pages six and seven and another double page spread—this time of the Daily Bugle’s office. Now more text captions come into play. We’re not following Daredevil. The text caption from page one wasn’t Matt Murdock speaking, instead it was Ben Urich, a reporter from the Daily Bugle and a supporting character from the Daredevil comics. TVs around the office play footage from the fight. Urich is upset that people just watched the hero die after all Daredevil has done for the city. Soon, Urich is tasked with covering the death and begins to look into the meaning of Daredevil’s last word, “Mapone.”

For those that don’t follow Daredevil, the reader is given a recap, and then shown the character beating his old villain, The Kingpin, to death. “Heroes do not kill,” says Urich. He still doesn’t know what led Matt Murdock to his death, but we readers know that something got to him, something brought him to murder. The noir detective story is just beginning. We’ve seen two shocking deaths, but neither are played just for shocks. There’s a sadness to each death. Each had conseqences.

The real weight of the story though centers on Ben Urich. The Daily Bugle is going under. Print is dead. At Daredevil’s death, people just took pictures and recordings. Same thing at the death of the Kingpin. Bendis and Mack are not just telling the story of Daredevil’s death. Quite honestly, that’s a boring story. The comic is about the reporter Urich’s change to action. He’s not going to be one of those people who just watch. He’s going to figure this thing out. He’s the hero.