While the second issue of The League of Extraordinary Gentlemen begins with the gang taking down Mr. Hyde and features the team stopping the Invisible Man from molesting women, the comic still seems very concerned with the treatment of minorities and outsiders in England. When the team returns from capturing Mr. Hyde, Mina Murray tells Campion Bond that she has been nearly killed twice in six weeks. Caption Bond responds, “A waspish tongue, Miss Murray, is to my mind but one of the many unattractive features of the modern suffragette.” He shuts her down right away. Also, nearly all of the panels for the two-page scene between the characters is framed from far away. They meet at the docks, which are under heavy construction, building a new London. The conversation can take place anywhere. It’s really only two talking heads. It’s exposition to set up the team going after the Invisible Man, as well as laying the groundwork for later plot developments. But Alan Moore and Kevin O’Neill put the construction workers and the poor city folk up front. They are making sure the reader sees what’s going on in the city. Workers rush around machinery. The poor sit in alleys starving. They look miserable. In one panel, a woman argues with a man in the background, and the man seems to be punishing a small child. Campion and Mina ignore them. The focus is most definitely on the poor and the immigrants who are building London’s future.

The team later travels to Edmonton to Miss Rosa Coote’s Correctional Academy for Wayward Gentlewomen where the women believe the Holy Spirit is impregnating them—it’s really the Invisible Man. The team is undercover, so they play into stereotypes. Mina plays the wife to Quartermain, and Captain Nemo plays the couple’s manservant. They easily get into the academy.

As the team is shown around, they pass a room where a teacher is punishing a student. The teacher slaps the woman’s bare ass with a rod, while another student holds the woman’s hands down. It doesn’t affect the plot at all. It’s a single panel and the scene is quickly forgotten. As they pass the punishment being dealt, the woman in charge, Rosa Belinda Coote, says, “Strictness and discipline, Miss Murray. That’s the key to everything!” Then, we are shown the beating. But, the key to this panel is in the dialogue and in the eyes of one of the characters. The student holding down the woman being punished has crazy eyes. She seems hypnotized. O’Neill is a fantastic artist and works with incredibly detailed images. I don’t believe she has the eyes of a hypnotized person just because. She’s losing her individuality, or has already lost it.

As she swings the rod, the teacher says, “Take that, Olive Chancellor, you willful girl! And that! We’ll soon thrash your independent American ways out of you!” To which the student being beaten says, “Ahhh! Mercy, Miss Carr! I am dying! Aah!” 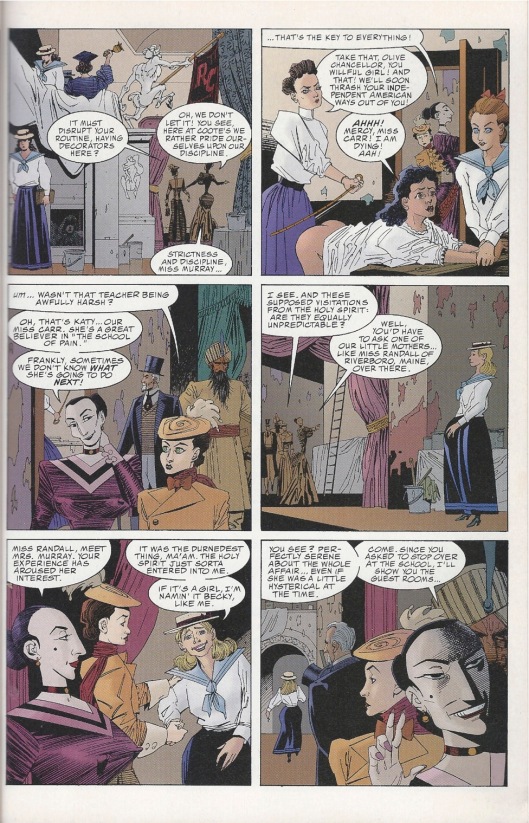 First, the dialogue is comical. It makes the whole scene ridiculous. Also, there’s a reason the teacher mentions the student by name. Olive Chancellor is a character from The Bostonians by Henry James. In that novel, Olive is a feminist and falls in love with a woman. In the comic’s panel, the only member of the team visible is Mina Murray, who earlier was chided by Campion Bond for being a suffragist. The teacher, Miss Carr, is Katy Carr from a series of children’s books by Sarah Chauncey Woolsey under the pen name Susan Coolidge. In the first novel, What Katy Did, Katy Carr is a tomboy who wishes to be beloved and to grow up and do something huge with her life, like paint a famous painting or save the life of someone drowning. At one point, Katy falls and bruises her spine, leaving her bedridden. In the end, the children gravitate toward her and she takes over running the household.

So here we get Mrs. Carr, who represents what the feminist movement is fighting against, beating a feminist into submission with some ridiculous dialogue in a throwaway panel. To me, Moore and O’Neill are showing readers throughout The League of Extraordinary Gentlemen the absurdity in bigots, in standing in the way of the future. The final scene introduces the next villain the team must face—The Doctor. We don’t know much about The Doctor, only that he’s worse than Captain Mors, who is described “as Satan Himself.” Captain Mors is another literary character, a German air-pirate from a popular German dime novel, Der Luftpirat und sein lenkbares Luftschiff. Captain Mors is basically Robin Hood in the air—he steals from the rich and gives to the poor. He was incredibly smart and traveled the solar system in a ship he designed. In many ways, he’s similar to Captain Nemo. A Nemo and Robin Hood mix. His crew was a combination of Indian and European, and he fought against evil. Doesn’t seem like a bad guy to me, but he protects the poor and whoever those in high society deem less than human, so I guess he must be stopped. The bastard. What’s he doing protecting the poor and the immigrants? I guess if the League thinks The Doctor is worse, they have a real lunatic on their hands.