In Brian Turner’s Here, Bullet (Alice James Books, 2005) some people don’t die, exactly; they are evaporated, or disappear as if they never existed, moving not from living to not-living but from something to nothing “as if even the idea of them were being / destroyed, stripped of form.”

For this blog, I’ve decided to read a book of poems a week, and hopefully you, dear reader, will guilt me past procrastination into territories both unknown and familiar. This territory was decidedly unfamiliar. Turner served for seven years in the US Army, and as the New York Times Book Review described Here, Bullet, “Turner has sent back a dispatch from a place arguably more incomprehensible than the moon – the war in Iraq.” As the Long Island Rail Road train I was riding passed under grey skies, from the suburbs to Queens to downtown Brooklyn, Turner’s words became a reminder that we are still at war (Elsbeth Pancrazi has a great poem about the far-awayness of war over at H_NGM_N) and those words also served as an exercise in naming and thereby imaging and humanizing (for example, Aracelis Girmay’s “Arroz Poetica”).

Turner is not the first to write about war, or specifically, this war. But perhaps the strength of this book is best understood in his own words:

Still hanging in the air over Ashur Square,

a strange incantation the dead hear

as they wander confused amongst one another,

when gunfire frightens them both,

Habib cries for his father, who tells him

and the tracery of lights on the sky

he retraces on the ceiling, showing the boy

how each bright star travels …

(from “The Al Harisma Weapons Market”)

The book ends with “dreams burn[ing] in the oilfields of night.” And so, readers: which book of poems should I read next? What collection (full-length or chapbook) burns in your mind like the strange dreams of malaria pills?

Monica Wendel (Episode 5, interview; Episode 49, interview; Episode 57, poetry) is the author of No Apocalypse. She is a visiting instructor of English at St. Thomas Aquinas College. Her poetry has appeared in Bellevue Literary Review, Forklift Ohio, Nimrod, Spoon River Poetry Review, and other journals.  A graduate of NYU’s MFA in creative writing program, she is the recipient of both Goldwater and Starworks teaching fellowships, and has taught creative writing at Goldwater Hospital, NYU, and St. Mary’s Health Care Center for Kids.

Episode 49 of The Drunken Odyssey, your favorite podcast about creative writing, literature, and drinking, is available on iTunes, or right click here to download.

On this week’s show, I interview my friend, the poet Monica Wendel, who is in residency at The Kerouac House, 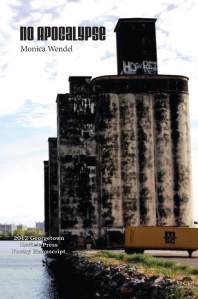 Two great Orlando events are coming up this week:

1. On Wednesday, May 22, 7 PM, the fiction writer Colin Winnette will be reading in the sOFT eXPOSURE reading series.  Get details here.

2. On Saturday, May 25th, please come to Monica’s farewell reading at The Kerouac House.  Get details here.

See the Glossary’s Film of David Foster Wallace’s This is Water:

Episode 49 of The Drunken Odyssey, your favorite podcast about creative writing, literature, and drinking, is available on iTunes, or right click here to download.