In Boozo Veritas #44 by Teege Braune

The Bone Must Go, the Wish Can Stay

I had long been aware of Odradek and knew that he had for some reason chosen to make our apartment his residence. As far as roommates go, he was not hard to get along with. He was quiet, neat, and mostly kept to himself, but his sudden appearances could occasionally be unnerving. Weeks might pass without me catching sight of him, when returning home late from work, distracted by other problems, I would be startled to find him sitting in the middle of my living room playing with a bit of lint. At other times, Jenn and I would be sitting casually together, faces glued to our respective smart phones when she would say something like, “The cats chased Odradek today,” without really looking up at me.

“Yeah, he scurried through the living room with bits of thread hanging off of him, but when I looked for him in the bedroom to make sure he was okay, I couldn’t find him anywhere.”

“Well, I’m sure he’s fine,” I’d say unable to feel concern for a creature who seemed more like an object than a living thing.

I suppose I will never know where he hid during his prolonged absences. I tried to look for him once. I can’t remember if my curiosity suddenly got the best of me, if there was something I wished to tell him, or if I simply wished to be distracted by his awkward shape and demeanor for a moment. Most likely I was avoiding any number of chores that would have been time better spent. I began digging through closets, pulling out old bins, emptying them and stuffing everything back inside when Odradek was not amongst the contents. Then I started opening all the drawers allowing myself to get preoccupied sorting through photographs and reading old Christmas cards, forgetting all about Odradek in the process. There always seemed to be another layer of debris to sort through, another jam-packed corner in which Odradek may be hiding. I did this until I began to feel irritated with him for making me muddle around in the tedious contents of my life.

“Why does he persist in these foolish games?” I asked myself. “I have better things to do this afternoon than dig through all this garbage.” 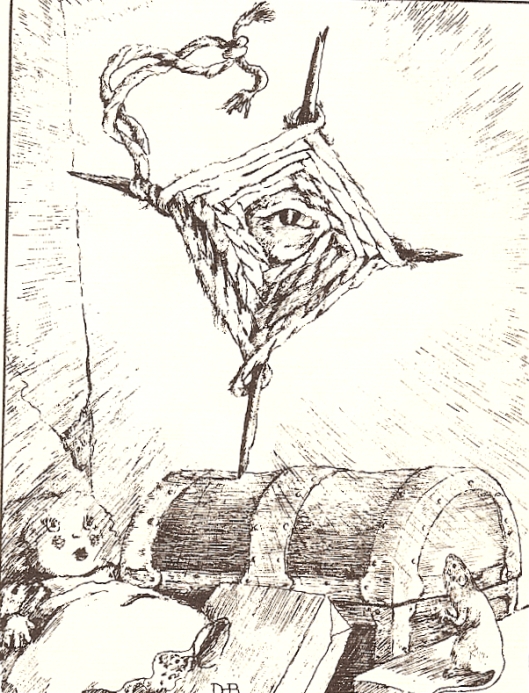 I grew increasingly anxious before I realized I wasn’t really concerned with Odradek’s whereabouts at all. He obviously didn’t depend on me to make his way in the world, and I had no need of him. Frustrated with myself, I plopped down on the couch and allowed myself to get carried away with the internet and social networking.

I’ll admit that Odradek never crossed my mind as Jenn and I were finally completing the final stages of our move from the apartment in which we had lived for the last four years, the vast majority of our relationship. I could have easily scooped him up and deposited him in the dumpster as we tossed out everything we could live without and removed one garbage bag after another. As I yanked out some old blankets in the back of our bedroom closet, I was surprised to see Odradek huddled up beneath them.

“I’m fine I suppose,” he answered.

Something in his tone had a note of sadness to it, or so it seemed, though I suspect he always came across a bit melancholy and I had never noticed until now.

“Will you be sad when we leave?” I asked.

“Others have come before,” he said.

Until this time it had never occurred to me that Odradek had lived in our apartment before we moved in, and I felt uneasy at the revelation that it was we who were encroaching on his home. I wondered what kind of relationship he had shared with the tenets who preceded us. Maybe they had been friendlier with him, treated him as a pet or even a member of their family. Perhaps he saw Jenn and I as unkind and unwelcoming strangers. Conversely, the old tenets may have screamed whenever they saw him. Kicked him if he got in their way and abused him when they were able to lay hands on him. His remote nature might be a product of the trauma and natural distrust he had developed from years of abuse.

On our way out I asked Jenn if she thought that maintenance would attempt to rid the apartment of Odradek once and for all before they rented it out to the new tenets, whoever they may be.

“Oh, I doubt they even know he’s there,” she said as we drove away.

Teege Braune (episode 72, episode 75, episode 77, episode 90) is a writer of literary fiction, horror, essays, and poetry. Recently he has discovered the joys of drinking responsibly. He may or may not be a werewolf.