Comics Are Trying to Break Your Heart #79 by Drew Barth

Take it to the Banks

I’ve mentioned them briefly before, but TKO is doing something different with monthly comics. Instead of waiting for trade paperbacks while a monthly series comes out, they opt to publish the entire story at once either in a collected edition or as a box set of six issues. As readers, we can binge our way through a series right as it begins, no waiting required. And if we’re going to talk about binging an entire series, we have to talk about a new crime family story courtesy of Roxanne Gay, Ming Doyle, and Jordie Bellaire: The Banks.

The Banks centers around three generations of the Banks family—Clara, Cora, and Celia—and their family’s legacy as the best thieves in Chicago. Celia, the youngest of the Banks, rejects her mother’s and grandmother’s professions, opting instead to work in the financial sector. But even here she is surrounded with thievery of a different kind and this brings her into contact with the man who killed her grandfather. And this could just be a heist story with a touch of revenge, but Gay, Doyle, and Bellaire are the kinds of storytellers that push a medium. These women know the best stories come from the best characters and the Banks as a family feel superbly realistic in their desires, their disappointments, their quirks, and their squabbles. A heist story is good, but a heist story with characters we can connect with on a personal level is even better. 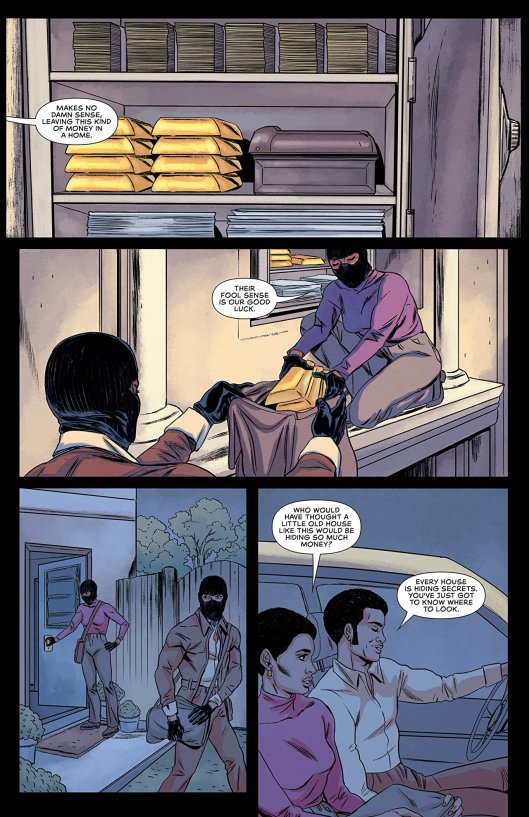 The ways Ming Doyle is able to convey complex montages and play with how weird time can be in comics is just another aspect of how goddamn good The Banks is as a comic. A two page spread can encompass Clara Banks and her husband’s entire courtship and marriage before we’re brought back to the present. What Doyle does so well here is showing the past only when we need it and not a moment more. At times, we’re provided the same kind of information and backstory as Celia—we’re in the dark as much as the main character. And, in a family who has been known to hide pieces of the past from one another, this method of storytelling only works to further bolster this idea of only getting a portion of the story at a time. This allows for the story of the Banks family to unfold with a slow determination that builds upon the foundation of the past without ever being trampled by details.

Works like The Banks, Far Sector, and The Low, Low Woods are easily some of the strongest comics to come out in the past couple years and they’re also all comics written by some of the best authors alive right now. It’s a trend in comics that should continue. There are voices in monthly comics—or in the case of TKO, seasonal comics—that have long been underrepresented. Women, especially women of color, aren’t as large of a portion of this comic writing world as they should be, but hopefully with such prominent authors working in the medium, we can start to see a shift toward having those voices being represented even more.

Get excited. Get more.