Miracleman, or Why I Hate Lawyers

In the comic book field, as in many other fields, people rip each other off. Many comic book publishers have a version of a superhero that is similar to a character published by another company. Sometimes these characters are created at the same time, and other times after seeing the success of a certain character, a publisher wants their own version to piggyback off of sales. Marvel has the X-Men, DC has Doom Patrol. DC has the Flash, Marvel has Quicksilver. Sometimes these characters coexist , and sometimes the competitive market cuts one loose. And sometimes, the character that sells less goes in a radical new direction, with the creative team realizing they can do whatever they want because the character isn’t worth anything. It’s much more difficult to take a character like Superman in a new, wild direction because that character is worth too much. The company, in a way, needs to protect him.

In 1953, Mick Anglo created a Captain Marvel rip-off called Marvelman for publication in the UK. Young reporter, Micky Moran, obtains powers based on atomic energy. By speaking the word “Kimota,” instead of “Shazam” like Captain Marvel, Micky transforms into Marvelman. He gains superhuman strength, invulnerability, stamina, flight, etc. The comic ran until 1963 and was even reprinted in Italy and Brazil.

Then for twenty years, it was forgotten.

In 1982, a British comic anthology, Warrior, was launched. It featured a new version of Marvelman, written by Alan Moore with art by Garry Leach and Alan Davis. In 1984, the comic was licensed to Eclipse comics and reprinted as Miracleman (Marvel Comics owns the Marvel trademark and in order for it to be reprinted in the U.S., the name was changed. Living in the U.S., I know the superhero as Miracleman.). Miracleman is Moore’s best work, and the best comic that attempts to tackle a realistic superhero.

Micky Moran, now grown-up Michael Moran, is married, has a fear of flying, and is unable to remember the word to turn him into a superhero, not that he even remembers he was a superhero. Years earlier, he was caught in a nuclear explosion. Luckily he survived, but had amnesia. Moran is a freelance reporter and is caught in the middle of a terrorist attack on an atomic power plant. He sees the word “atomic” backwards while being carried past a door, which causes him to remember “Kimota.” Then Miracleman returns.

Later, he discovers his old sidekick Kid Miracleman, who lived his whole life with superpowers and was corrupted. He serves as Miracleman’s nemesis throughout Moore’s run on the title.

In his sixteen-issue run, Moore reveals that Miracleman never did anything that happened in the Mick Anglo years, that it was part of a computer simulation by the military, and that the nuclear explosion he was caught in was the military’s attempt to shut down the program.

Also, Moore attempts to offer a scientific explanation for Miracleman and Kid Miracleman’s powers. They each have two bodies, one normal and one superhuman, that upon saying their magic word, they swap consciousness with the other body, that’s being kept in a different dimension in stasis. So when Moran says, “Kimota,” that first time, it calls upon a body that hasn’t aged in twenty years. Kid Miracleman’s superhero body is old, where his normal body is a thirteen-year-old kid.

The strongest aspects of Moore’s run are not the scientific explanations or the revelations of what happened to Moran. This is the most mature take on the superhero concept. When I hear about a comic being realistic, it seems to mean there’s foul language, lots of violence, and sex that’s either consensual or not. They’re called gritty and dark. It’s as if these creators look at the real world as New York from Escape from New York. Sometimes I feel like in their reality, I will be instantly covered in grim after leaving the house, raped, and beaten to a pulp.

In Miracleman, Moore keeps the focus on the psychology of the characters. What would it be like to discover one day that you can have the body of a god? That you can do anything you want? Not only does Moore focus on the psychology of Michael Moran, but also on his wife. What would it be like to be married to a god? How inferior one must feel. Now how would that woman feel when she finds out she’s pregnant with the world’s first superhuman baby? Halfway through Moore’s run on the title, he introduces a superhuman woman, who is Miracleman’s equal.

While the comic has its fair share of violence, it never loses sight of the effect of the superhuman on the mortal man and woman. The fights that are shown are not people punching each other until one gives up. When it’s Miracleman fighting a human, the fight is between a god and a mortal. It’s less about who wins than it is about showing Moran’s losing part of his humanity, becoming comfortable with being a god. The comic leaves room for acts of love as well. Issue nine features a six page scene of Miracleman delivering his child (in the most graphic delivery scene I’ve read).

Moore’s run culminates in a battle between Miracleman and Kid Miracleman, who lays waste to London. The fight is less a superhero fighting a super villain, and more God fighting the devil, with humanity caught in the middle. When Man of Steel came out this summer, I heard all this talk about how the final battle is what would happen if super-powered people fought in a city. Bullshit. All those types of battles show is what a boom it would to own a construction company in that world. The battle shows no effect on the residents of Metropolis. In Miracleman, the victims are constantly shown. It’s not the destruction of London that’s horrific; it’s the look on the victim’s faces.

In the end, when Miracleman is forced to kill his old sidekick, Moore writes it, not as a scene that’s really about Miracleman. He doesn’t take the road that every other superhero writer has taken, where the focus is on how the superhero is brought to kill another creature. Miracleman kills constantly throughout the series. He’s a god, not a hero. The focus of the end of the battle is on Kid Miracleman, on the normal thirteen-year-old boy, crying over what his evil counterpart has done, and Miracleman takes Kid Miracleman in his arms and hugs him. Then, Miracleman kills him. Some deaths in comics succeed because the character has been around for many years, so losing that character is heartbreaking, like Gwen Stacy’s death in Spider-man. But in sixteen issues, most of which don’t feature Kid Miracleman, Moore wrote a death that is at once relieving, horrific, and sad. The death scene is the most affecting one I’ve read in any comic, maybe in any medium of fiction.

Moore’s last issue features no real battles. There are quick montages of violence, but the focus is not on action, but on Miracleman accepting his place as a god, as someone above the rest of humanity. It features a beautiful, mostly silent, six-page love scene between Miracleman and his female counterpart as they fly above the world. Then, he leaves the last remnants of his human life (his wife) and takes his place in his fortress above humanity.

After Moore finished, Neil Gaiman took over writing duties with Mark Buckingham on art. He planned three books of six issues apiece (“The Golden Age,” The Silver Age,” and “The Dark Age”). It took place years after Moore’s run, in a utopia Miracleman helped create. Gaiman deals with Miracleman’s doubts of forcing his vision on the world. “The Golden Age” focuses more on the effect Miracleman has had on the individual person than on Miracleman himself. His first issue is about the dangerous journey of a handful of people up the steps of Miracleman’s palace, like people climbing Mount Olympus for a look at Zeus. Of course, some don’t make it the whole way. When they reach Miracleman, he greets them with, “Well, my pilgrims? What have you come to me for?” 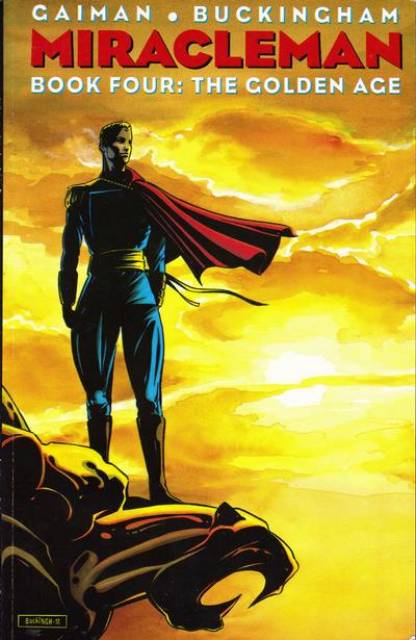 Unfortunately, Gaiman couldn’t finish his planned run. Issue twenty-four was the last to be published. Eclipse, the publisher, went bankrupt two issues into “The Silver Age.” After that, the rights to the character got tied up. Todd McFarlane, bought the rights to Eclipse’s creative assets, but as it turned out Miracleman was not included in that purchase. Gaiman fought for years, forming Marvels and Miracles LLC to clear up who actually owned the character. (The reason Gaiman wrote the Marvel comics, 1602, was to help pay legal fees. He dedicated it, “To Todd, for making it necessary.”)

In 2009, Marvel Comics announced at San Diego Comic Con that they purchased the rights to Miracleman. (When Joe Quesada announced that, I rushed down to the Marvel booth to get one of the only a handful of Marvelman T-shirts they had.) Now that Marvel owned him, Miracleman once again became Marvelman. However Marvel has only reprinted the early Mick Anglo comics. Alan Moore’s issues have not been reprinted, and Neil Gaiman’s run has not been continued. No one seems to know what’s going on. I’ve heard speculation that Moore’s run is owned by a handful of separate comic creators. Moore has stated that he would donate any money from Marvel’s reprints to Mick Anglo, so he’s not the issue. Hopefully, Marvel, with the backing of The Walt Disney Company, can sort out it out, so the series could become widely available. For now, you’ll have to search back issue bins, or, if you’re my friend, borrow them from me.

1 thought on “Heroes Never Rust #7: Miracleman, or Why I Hate Lawyers”