My father, who was a passionate reader, was afraid his children weren’t reading enough, so he made it a priority to get us reading at a early age. If we started reading when we were young, he thought, then we’d be readers for life. Judging from how much my sister, my brother, and I read versus the average adult, I’d say my father had used sound logic. As a child, I was not fond of children’s books. Even young, I didn’t want to read something that I felt was talking down to me—dumbing a story down, making it less harsh, more easily digestible. But, of course, I couldn’t very well read many “adult” books either—not because my father wouldn’t allow me, I read quite a lot of his fantasy and science fiction novels, but because I didn’t understand so much of it. My father had read comic books when he was a kid—Thor, Conan, Sgt. Fury and The Howling Commandoes—so he started getting us comics.

For whatever reason—what good is a reason? Who cares?—I took a shine to them. My brother liked Wolverine and my sister liked She-Hulk, but they didn’t stick with them. Throughout my life, I read comics religiously for a few years, then stop for a couple, and then return. I believe anyone who hasn’t read a substantial amount of comics, including superhero comics, has done a great disservice to themselves.

My first blog post was about the first comic book I remember getting and the impact it had on me. But that’s not really the comic that hooked me. How could the first of an obsession be the most important? The first wets one’s appetite, but the second is the real hook—the returning.

My birthday is May 14, which comes at the end of the school year. In fifth grade—the last grade offered at Morrow Elementary in North Lauderdale—we were taken on a fifth grade class trip to Universal Studios. We drove up early that morning in a couple of school buses, and drove back that night. That morning, before my mom drove me to the school, my father gave me a copy of X-Men: Omega, the end of the X-Men event, The Age of Apocalypse, which I had been following for the few months it had endured. We didn’t have a home computer in 1995, and the World Wide Web was not known to me. I had heard about this comic—the big end—in whispers on the playground and from the neighborhood boys of who would live, who would die, and all the in-betweens.

The Age of Apocalypse was the greatest X-Men sequence of the 1990s.  In spun out from the Legion Quest story arc, in which Professor X’s forgotten son, Legion, went back to a time before the X-Men had ever been formed in order to kill Magneto. He wanted Professor X to raise him instead of forming the X-Men. Instead, in a show of the love he has for Magneto, Xavier jumps in the way of Legion’s attack and dies. This creates quite the problem. If Xavier dies before creating the X-Men, then the X-Men never existed in order to stop the supervillains and try to diffuse the tension between humans and mutants.

The world goes to shit.

Apocalypse, a thousands-year-old mutant who believes in Survival of the Fittest, awakens earlier due to Legion’s show of power in the battle resulting death of Xavier. Without the X-Men to stop him, he conquers most of North America with the help of his four Horsemen—Holocaust, Mister Sinister, Abyss, and Mikhail Rasputin. Humans are relegated to Europe, at least the lucky ones. If they couldn’t escape America, they were culled and taken to camps—the X-Men version of the Nazi Holocaust.

Magneto forms the X-Men—a very different group from Xavier’s—in memory of his friend and fights for the dream Xavier believed in. I don’t want to ruin most of the twists and turns, but it is pretty amazing. I love alternate versions of characters—the designs in this story are fantastic. It’s like messing with characters in early drafts of fiction stories—by seeing different sides of the character, one understands that character better—what can change about them and what can’t. For example, Cyclops wasn’t picked up by Xavier, so he was raised by Mister Sinister and works the pens, where the humans are kept before being experimented on by the Beast. Yet, Cyclops works secretly to help humans escape, as many as he can. You can’t take the good out of him. Another great example, and the first time I really loved the character, is with Colossus. He was always protective of his sister, Illyana, but here after he finds out she’s still alive, he will do anything, including letting his students die, to protect her.

The writers took the idea of the post-apocalyptic world and ran with it. Well-known characters died—Cyclops, Angel, Shadowcat—and lesser-known characters were stars. Some characters, like Spider-man, didn’t exist at all. The event was intense, with a human holocaust and the world on the brink of nuclear war. Looking back, I can’t think of one happy storyline in the event. Everything was tragic—and in fifth grade, that meant adult.

Universal was three hours away, so in a six-hour round trip, I had plenty of time to read and re-read the comic. I studied every panel. The Age of Apocalypse event was across multiple mini-series—X-Calibre, Gambit and the X-Ternals, Generation Next, Astonishing X-Men, Amazing X-Men, Weapon X, Factor X, X-Man and ­X-Universe. X-Men Omega brought them all together for the last big battle of Magneto’s X-Men versus Apocalypse and his forces as the Human High Council in Europe plans to nuke America. Nearly everyone (well, at least those who survived the individual mini-series) had his or her moment. Some, like Cyclops and Jean Grey, fought to escape America. Some, like Colossus, fought to protect others. The main X-Men team didn’t fight for their world at all. Instead, Magneto and those closest to him, fought for the promise of a better world.

The plan was to send Bishop back in time using a crystal Apocalypse had possession of in order to stop Legion from ever killing Professor X, but only Bishop knew about the “real” world. Magneto just had to put his faith that his world wasn’t supposed to have happened. It seems like there’s death on every page, and yet the deaths still feel earned. The scene in which Colossus, in a rage to protect his younger sister, crushes his wife, forcing Gambit to put him down is tragic in nearly every panel of those two pages.

And how cool is that ending. I… can’t. I’m concentrating. And then Magneto rips Apocalypse in half.

In the end, the X-Men succeed in putting the world back to normal. But the comic doesn’t end in victory, not really. It doesn’t end in the correct timeline with the X-Men happy at the mansion. It ends in the Age of Apocalypse world with Magneto, his wife Rogue, and their infant child as the bombs go off and the world is erased. The family stands there in hope that everything will be better and we watch them get engulfed in the fallout. Even in victory, there is tragedy. 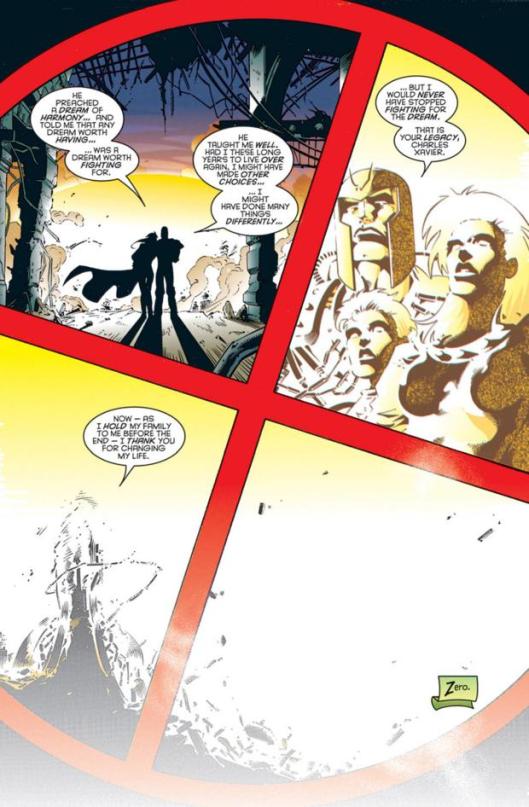 That was the coolest bus trip ever. Even now, when I have problems with the current storylines, I know I’ll come back every so often to check in. That was when the X-Men got me for life.