The final issue of We3 is bloody and violent and heartwarming. It’s a fitting end to the series that seems like it ended too quickly, but I guess there’s only so far a story about three animals in robot suits searching for home can go. The issue opens with a homeless man finding the team sick and beaten in a dilapidated shed. The rabbit is hurt from the gunshot wound from the previous issue. The man goes to help them, but he finds the police searching for something. While the second issue features most of the breathtaking panel design of the series, there are a few good moments here. The first comes when the homeless man meets the cops. On top of a long, thin panel depicting a couple of police officers standing in the rain, Quitely places six small panels, like in the last issue, that are rotated on a three-dimensional plan—they look like they hang over the background panel. In each small panel is a detail of the scene: police tape, police lights, a gloved hand. By breaking the image down into small, detailed panels, the design allows the reader to see the scene, create their own large image, and have it make up only a fourth of a page. Usually, a break in panels represents time passing, but here, Quitely uses separate panels to show different areas of a larger image.

The mastiff in a robot suit is let loose against the animals in a train depot. The rabbit confronts him alone, while the dog and cat search the area. The mastiff is easily five times the rabbit’s size, and I have to give the rabbit credit for ramming the mastiff’s nose with its head, but that poor rabbit never stood a chance. By the time the dog finds the two, the mastiff has the rabbit in its mouth with his teeth crushing the rabbit’s head. I guess one of the team had to die. I care very little for rabbit’s because an ex-girlfriend once had one that was annoying so I wasn’t sad to see the rabbit go. At least, the rabbit gets one last shot in by dropping a bomb. It doesn’t kill the mastiff, but gives the dog a chance to run.

Doctor Roseanne gets her last scene when the military sends her in to calm the dog so sharpshooters can get the dog in their crosshairs. The best panel of the issue is Doctor Roseanne holding the dog’s head in her hands. His eyes are closed and he’s clearly at peace for the first time in the series, and he says, “We3 gud. Gud dog. Home now.” Instead of letting the military shoot him, Doctor Roseanne tells the dog his real name (Bandit) and jumps into the line of fire, sacrificing herself. And of course, the dog doesn’t know what’s happening and runs off repeating, “Bad dog.” He runs right to the mastiff.

Now I don’t like cats much. They’re okay, but I don’t want to own one. But when that damn cat jumps from out of nowhere and grabs the mastiff’s eyes with its robotic claws and saves the dog, I want to cheer. Another cool panel layout comes with this scene as the dog runs into the cat and mastiff battle and the three smash through a brick wall. The page ends with the reader not seeing where the three go, but the panel ends and the three fall out of it and into the page gutter. It makes the fall seem so much more forceful and such a larger drop than just a detailed picture would do. 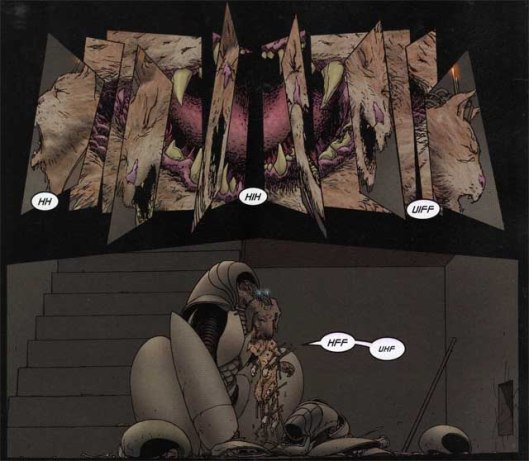 Once the mastiff is taken care of, the animals escape long enough to shed their robotic suits. The dog has a self-realization moment when the leg of his suit breaks off. “Is coat not Bandit. Is coat not we.” He then tears into the cat, removing the suit. Quitely gives us another three-dimensional panel design with a collection of rotated thumbnail panels showing the cat in pain. Again, the panel layout emphasizes the cat in agony much more than one large image could. It seems nowadays that artists go immediately to a full-page shot or a double-page splash to show a big moment, but Quitely proves with We3 that that approach isn’t as strong. Concentrating on storytelling through panels can have a much greater effect.

Of course, the remaining animals escape the military and they live happily ever after with the homeless man. I wouldn’t be writing this if the dog died. There are too many stories where the dog dies. I would have thrown out the comic if he died. He gets to live happily ever after because he’s a dog and dog’s are the best. The cat gets to live too since the cat helped out the dog. The rabbit died because, well, who cares. Gud dog. Gud dog.