Jeffrey Shuster, The Curator of Schlock, The Substitute 3

The Curator of Schlock #105 by Jeff Shuster

The Substitute 3: Winner Takes All

There’s no substitute for Treat Williams. Yeah, we’re stuck with him again!

Look, I like Treat Williams. I just don’t know that he was the best pick to play a hardcore mercenary turned high school teacher. How many hardcore mercenary turned high school teachers have you met in your life, Mr. Curator? Well, I’ve met three and they all resembled Tom Berenger, so I don’t want to hear it! Anyway, we continue Back to School Month with The Substitute 3: Winner Takes All from director Robert Radler, if that is his real name.

I have to give credit where credit is due. The Substitute 3: Winner Takes All is a mean movie where mean people do mean things to each other. Treat Williams returns to the role of Karl Tomasson…that’s an odd last name. Is it Nordic? Son of Tomas? Anyway, the movie starts out with Tomasson being held prisoner by some of Slobodan Milošević’s goons. His mercenary partner is beaten into paralysis below the neck so Tomasson suffocates him to death as any good friend would, kills the guards, and skips back to the United States to deliver the guy’s necklace or Medal of Honor or something to that effect to the man’s daughter.

It turns out his friend’s daughter teaches English Literature to a college football team named the Rams. They’re kind of rude in her classroom. They toss the football around when they should be paying attention to the lesson about Thomas Wolfe. She says they’re going to fail the course, which results her getting assaulted after hours by the team and sent to the hospital.

Here’s what I don’t get? Why is this delinquent football team even showing up to class? They don’t want to be there, so why not just intimidate the teacher into keeping their attendance in addition to passing them? If I didn’t know any better, I’d say their attendance is just an excuse to let Tomasson play the role of English Professor. Apparently, he has a Doctorate in Contemporary American Literature. 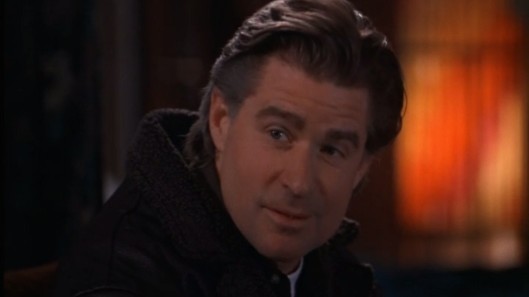 Ha! He tussles with one of the football players in class when a discussion of Graham Green’s The Quiet American falls on deaf ears. Tomasson comes to the conclusion that the football team is on steroids

Claudia Christian plays a mercenary named Andy who Tomasson sends undercover to a wannabe Hooters restaurant so they can find the connection between the evil football team and their connection to the mob.

Tomasson and the cookie monster have her under video surveillance during a wet t-shirt conference. Seeing Treat Williams and some sweaty guy shoving spit-laden M&M cookies in his mouth while they comment on silicone breast being splashed with water in a van that looks like it belongs to a serial killer is not my idea of a good time. The sacrifices I make for this blog!

5 Things I Learned from The Substitute 3: Winner Takes All