Holding on to Challenges

In my undergrad days, I directed several Murder Mystery Nights for the University of Central Florida’s anime club.

The event combines scripted scenes and improv. The characters are chosen from anime or anime-related content based on that evening’s theme.

With other writers, we created a script based off of how these pre-existing characters might react to each other, keeping true to the canon of our beloved material. There are challenges with writing a bunch of characters whose powers in their own world makes sense, but clash when set against others’ powers.

I was terrified of what I agreed to undertake when I became director. I hadn’t been given a chance to lead any major project until that point; I was unsure if I would be successful. But if no one had stepped up at that moment, the tradition that I joined as a college freshman would’ve been discontinued. I didn’t want the concept to be discontinued. 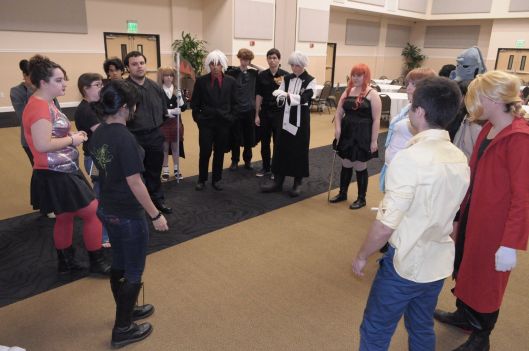 My decision payed off. Through several shows I learned how to direct a major project, but also to accept help from other talented individuals. One of the oddest string of networking involved hunting a dude down who potentially knew how to sew clothes—because he was with another friend who had sewn cosplay as they bought food from my job, and that he (this friend of a friend) worked at Joann’s Fabrics. I reached out. It turns out that he did, in fact, make his own cosplay costumes, and even had the outfit already made for one of the characters in the show (made for a separate occasion entirely). I felt proud and a tad creepy.

I love directing Murder Mystery Night because of the high level of craft and creativity that goes into these shows. From cardboard boxes, we created vending machines with operational lights. Stagehands stood inside these boxes, where they engaged in transactions with the audience members. In another show, there was an entire subplot where the only goal of one of the characters was to enter the public swimming pool. This pool was represented by a round, inflatable kiddie pool, which wasn’t meant to be taken seriously at all. The audience definitely got a kick out of it.

All of that work was done for free.

Because of my experience, and due to this being Anime Spot’s tenth year as an official organization, the current board was ecstatic to have me direct. But I wonder if my fluctuating esteem as a creative mind has resulted in these mixed emotions. I knew how to direct this event well, so there was no challenge with directing this year’s show. I can’t tell if this is arrogance or complacency.

I’ve been out of undergrad for over a year. I am starting my MFA in Children and Young Adult Literature next January, but I still find myself contributing to these shows. Thanks to a suggestion from my friend Hannah, we’re performing this year’s show at a local anime convention, Holiday Matsuri. Hours of planning, rehearsals, and organizing have gone into a project that may result in connections and resume building. I did get a free weekend pass to attend the convention.

Maybe what adds to my complacency is that nowadays, I don’t need to Sherlock my way to finding connections. We wouldn’t have the awesome base of Death Parade as the foundation for this show, if not for my assistant director, Alexander. Most of the cast can sew and alter their cosplays, and help those who are less skilled. My other friends, Austin and Matt, have acquired and edited all the sounds and props. And we have not one, but two awesome flyers thanks to Imani and Hannah. And the Anime Spot officers also help with whatever funding we may need, as well as relations with the convention staff.

Over time, so many unique minds have gravitated to Murder Mystery Night. I’ve always been emotional with story endings, especially since I grow too attached and am vehemently against change. But I can’t hope to grow if I don’t accept new tasks that challenge me. 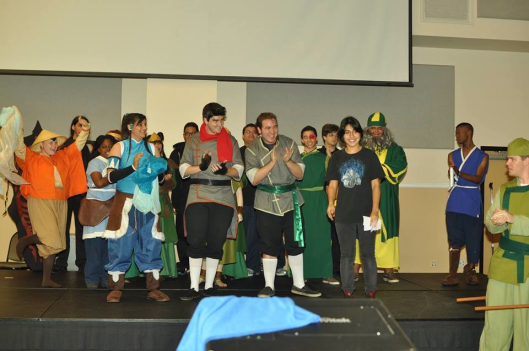 I’ve heard Murder Mystery Night described as a “glorified fanfiction,” which I both loathe and love. The script is fan fiction because these stories take place outside the context of the characters’ respective series. We do distinguish what point the character is being written from in his or her respective show. We make educated guesses on how the characters will react to the synopsis. But the word glorified downplays everyone’s time, effort, and skill that goes into creating well-crafted stories. MMN is glorious fan fiction. 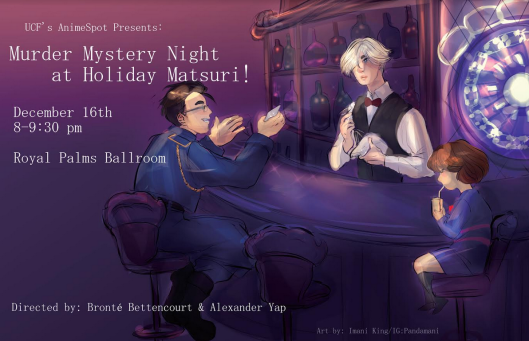 My involvement with Murder Mystery Night may wane after this show. But the tools I’ve gained will help me tackle challenges that I wouldn’t be able to otherwise without such awesome experiences. And if you’re an Anime fan in the Orlando area December 16 through 18, definitely check out the show at Holiday Matsuri, if you can! 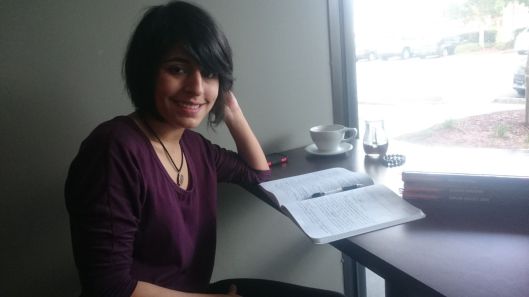 Brontë Bettencourt (Episode 34, Episode 221) graduated from the University of Central Florida with a Bachelors in English Creative Writing. When she’s not writing or working, she is a full time Dungeon Master and Youtube connoisseur.