How Not to Write a Short Story

The intention was to write a short story, inspired by a friend’s painting. Five thousand words, at most. By the time I finished, I had more than 14,000 words, which hardly constitutes a short story. It was a novella, one that dug deeper than the modest chiller I planned to write when I encountered Shane Jones’ painting of a very realistic door.

Two thoughts popped up when I read the thirty-seven manuscript pages of the novella that was passing itself off a short story:

Admittedly, I don’t entirely suck at short story writing. It’s just that I find it hard to corral ideas that fly out in all directions. Despite this shortcoming, I’ve written stories that went on to be quite successful in their own way. But the last time I was commissioned to write one for an anthology with a particular theme, the story blew out from 8000 words to 32,000 words. Of course, the editor rejected the submission, and who can blame her? I’m now turning that 32,000 words into a 65,000 word novel.

The original idea for the short story about a painting of a door was basic.

When I saw the life-size painting hanging in Shane’s stairwell, I thought it was a real door that led to a newly constructed room on the other side. Shane laughed and pointed out it was the same painting I had tried to open a few years earlier at his exhibition of trompe l’oeil, a series of visual illusions that trick the eye into perceiving a painted work as a real, three-dimensional object. 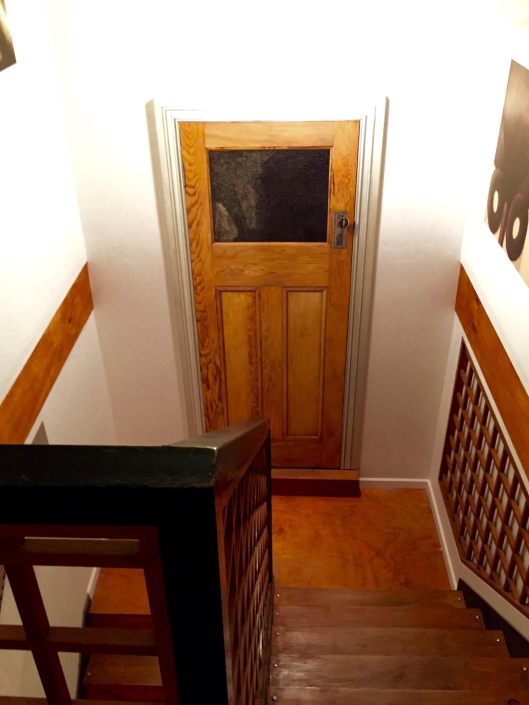 The top part of Shane’s painted door is taken up by a frosted glass window. That suggested infinite story possibilities to me. As we dined that evening, the alcohol-soaked grey cells in my head ticked away at the problem of the door in the stairwell.

I’m a fan the traditional ghost story. M. R. James, Susan Hill, Robert Aickman. They’re writers I turn to with reverence and awe; and their invisible presence was very much beside me at the table, talking over and above the real people sitting across from me that night.

I thought what would happen if you walk past the painted door one day and see a face in the glass? What would you do if you hear a cry in the night and discover it’s coming from behind the door?

That’s how stories begin, you see, and you have to be attuned to them. You have to listen when they come a-knocking at the portals of the mind. I listened, but I didn’t know what to do with what I heard. I saw a situation, but I didn’t see a character or a story. I went home, wrote it down, and there it sat for well nigh on a year, until Shane asked how the story was coming along. I told him it wasn’t. Soon after, he emailed a detail of the painting.

I had forgotten, but in the round silver doorknob, he had painted a reflection of himself standing at an easel, painting that very door. It’s an idea straight out of Jan Van Eyck’s 1434 Portrait of John Arnolfini and his Wife. The wryly observed, self-reflective (and self-reflexive) detail Shane sent me was exactly what I needed. It fed directly into my brain where it was suddenly water for dry soil; and quite unexpectedly a new idea sprang out of an old idea. Or rather two ideas combined to make a whole.

Sometimes this happens. You get an idea and you don’t know what to do with it. And then, three or four years down the track, you have lunch with a friend or turn on the television and stumble on another idea. The current idea is in perfect synch with the earlier idea. They glom on to each other and you’re ready to go. That’s why it’s important not to rush writing.

Anyway, finally, I knew what to do.

I would write a psychological ghost story about a man who confronts hidden truths about himself. With this came everything that had been eluding me for a year. (Patience pays.)

I saw a beginning, a middle and an end. I don’t begin writing if I don’t know how a story will begin and how it will end, right down to the sentence. The only thing I didn’t know was how to get from one point to another. I decided to let the story dictate a path. I even had the tone of the story, the style of writing and the main players; how the language would flow to become an integral part of the atmosphere. Even the central images and metaphors presented themselves, as if they had been hiding round the corner all along and now they could show themselves.

Writers are often accused of plundering friends’ lives. It’s sometimes true of me. For instance, three characters in The Boy by the Gate are my friends in real life, right down to their names, dress, speech and behaviour.

When I’m looking to create a fictional character and my brain refuses to provide the piquant detail, I see no reason why I can’t turn, in a desperate moment, to those around me and pick and choose features and attributes that will work for a story. Most writers do this and there’s no reason why shame or secrecy should to be attached to what is after all an organic process.

I decided there and then that fictionalised versions of Shane Jones and his partner, the painter Deborah Klein, would appear in The Door. Their warehouse apartment serves as a key location. Thankfully, they were flattered rather than horrified by the way I plunder their lives. Though, of course, the Sean and Dora you encounter in the story are merely leaping-off points, not the real people. In fact, what happens to Sean in the novella is more reflective of my state of mind at a certain point, rather than the real Shane Jones.

On one level, The Door is about facing darkness to shed light on life. The story takes a character on a journey through the upper and lower realms of his psyche, as he moves through transitional spaces (doorways and stairwells) that carry him from one state of mind to another. In that regard, the layout of Shane and Deborah’s split-level apartment, with the staircase, was perfect for what I needed. Why not use it?

Once I could see and hear the characters, the story dictated its own terms. The pace — slow and measured — was an obvious choice for the character’s hesitant, groping progress. And once I hit 8000 words and kept going, I knew I had a novella on my hands. Not a short story.

The story imposed its own length because, ultimately, a story is as long or as short as it needs to be. No amount of corralling can change that. You have to trust the process and let it take you where it will. But not too far from where you want to go. 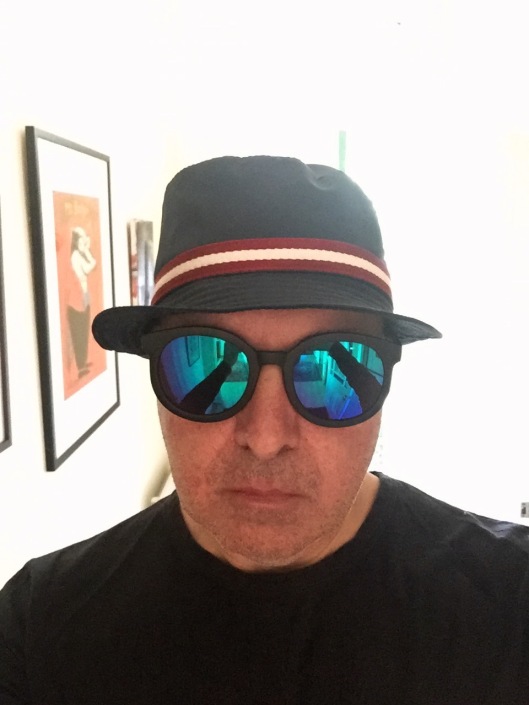 4 thoughts on “Pensive Prowler #4: How Not to Write a Short Story”