Episode 232 of The Drunken Odyssey, your favorite podcast about creative writing and literature is available on iTunes, or right click here to download.

On this week’s show, I talk to the nonfiction writer Pamela Skjolsvik about creative nonfiction, anxiety, and death,

plus I briefly eulogize a triumvirate of entertainers: Leonard Cohen, Robert Vaughn, and Kevin Meaney. 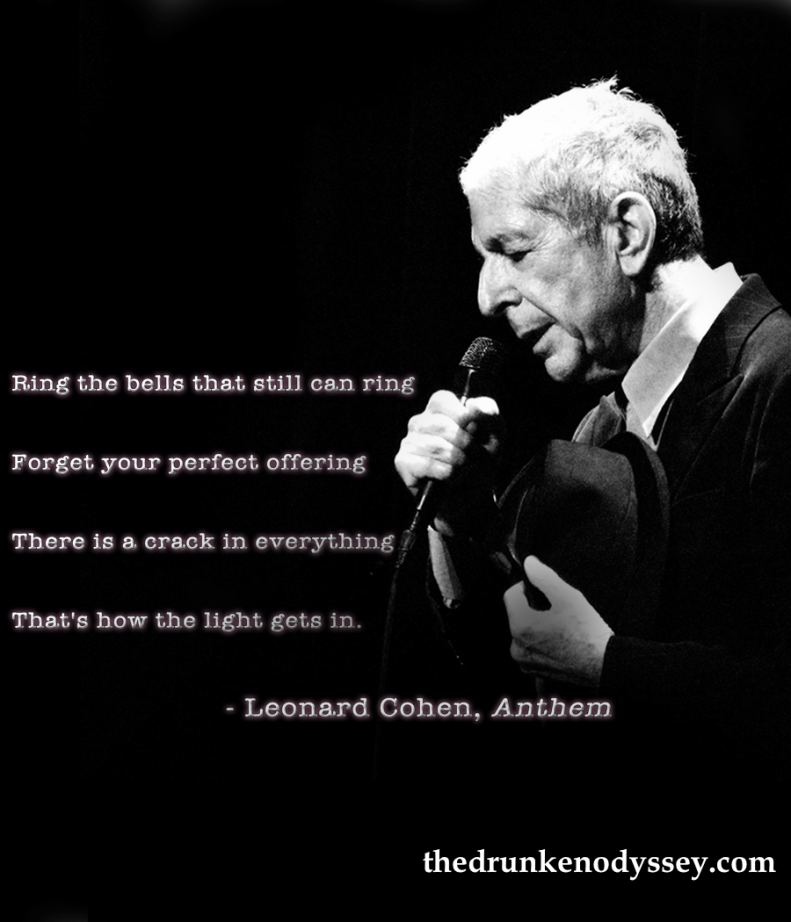 Check out Pamela Skjolsvik’s essay about David Sedaris back on episode 50.

Episode 232 of The Drunken Odyssey, your favorite podcast about creative writing and literature is available on iTunes, or right click here to download.

Episode 50 of The Drunken Odyssey, your favorite podcast about creative writing and literature is available on iTunes, or right click here to download.

On this week’s show, I talk to the memoir writer David Sedaris, 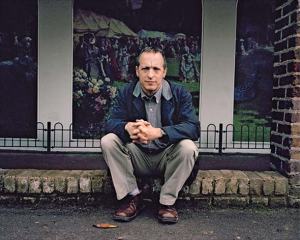 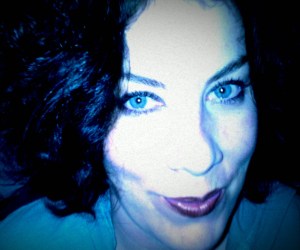 and Adriana Lecuona writes about Ursula K. Le Guin’s “Those Who Leave Omelas.” 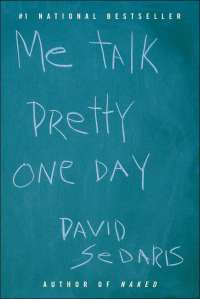 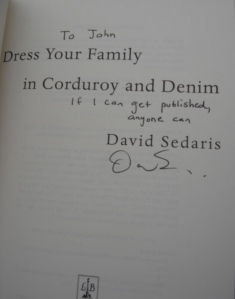 David’s inscription in my copy of Dress Your Family in Corduroy and Denim. 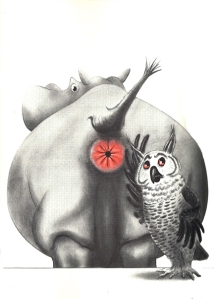 One of Ian Falconer’s illustrations from Squirrel Seeks Chipmunk.

Episode 50 of The Drunken Odyssey, your favorite podcast about creative writing and literature is available on iTunes, or right click here to download.

Episode 48 of The Drunken Odyssey, your favorite podcast about creative writing, literature, and drinking, is available on iTunes, or right click here to download.

On this week’s show, I interview the fiction writer Dylan Landis 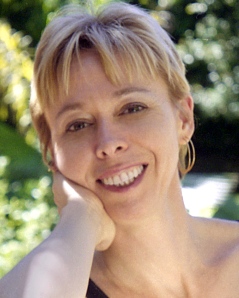 plus the poet Eleanor Lerman writes about Leonard Cohen’s Spice Box of Earth.

Harper Lee is suing her former literary agent, according to an NPR story.

If you live in Central Florida, come to the next event in Jared Sylvia’s Functionally Literate series, despite the fact that I am reading there. 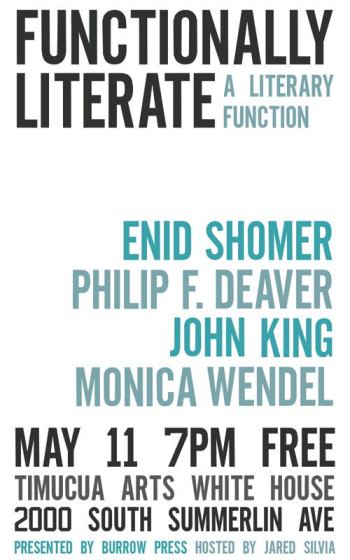 Episode 48 of The Drunken Odyssey, your favorite podcast about creative writing, literature, and drinking, is available on iTunes, or right click here to download.

You might be thinking that at this stage of his career, reviews of any new David Sedaris books are superfluous.  He has his devotees, who might be impervious to any criticism, and if you aren’t already familiar with at least some of his work, then you have somehow missed a fairly ubiquitous vein in the NPR, New Yorker orbit of literary accomplishment.  If you are a serious reader, how could you have missed him?  You are under 22 years old?  Okay.

It has been five years since David Sedaris last released a book of essays, When You are Engulfed in Flames.  With its sardonic wit, idiosyncratic areas of curiosity, and personal revelations, this book culminated what was a series of humorous non-fiction collections that included Barrel Fever (1994), Naked (1997), Me Talk Pretty One Day (2000), and Dress Your Family in Corduroy and Denim (2004).  I had seen Sedaris read from Barrel Fever to a rather confused Miami crowd back when he was promoting his first book; no one knew what to make of his fictional satire about being in a passionate relationship with Mike Tyson.  I was also on hand when he made an appearance at the flagship Barnes and Noble store in New York City’s Union Square; that event brought thousands of people into the store, and it had the air of hysteria I usually associate with a rock concert.

In 2010, however, Sedaris surprised his readers with Squirrel Seeks Chipmunk: A Modest Bestiary. In this collection of new fables, there were no personal essays.  There were no new stories, or new remembrances of, his large Greek family, especially the exploits of his wild brother, Paul, who is nicknamed the Rooster, or his wickedly unusual sister, the actress Amy Sedaris. Squirrel Seeks Chipmunk is, in my opinion, an excellent book.  It’s provocative, insightful about human foibles, funny, and does a lot to keep a valuable genre of writing in currency.  But the collection of fables wasn’t nearly as popular as his nonfiction collections.

I forget what first got me seriously interested in Sedaris’s work.  One of his essays, called “Full House,” was featured in one of the textbooks I was teaching from, and somehow I ended up with a copy of the audiobook for the collection the essay was in, Dress Your Family in Corduroy and Denim.  Not long afterwards, my family was listening to those CDs, and then I got all of David Sedaris’s audiobooks.  If one of the purposes of literature is to make us less lonely, then Sedaris manages that so deftly, and more so than almost any other writer today, his ability to read his work entertainingly has become entwined with his appeal as a writer.  When you hear his audience laughing at his dry jokes, you have to be in a dire mood not to feel like you are there.  Only Billy Collins comes close to being this important in speaking his writing before live audience.

I’ve just read David Sedaris’s latest book, Let’s Explore Diabetes with Owls, which comes out on Tuesday, and it’s the best book he’s written.  What I find so surprising about this book is that when he revisits stories about his family, they feel differently than they did in previous books.  There is more tension in his narratives.  He feels less compelled to always be humorous in these essays—not that the funniness has disappeared—but the seriousness of his tales mingles with the humor in ways that are more evocative than in his previous, superior work.  While the endings of his essays have in the past often been open-ended, merely formal codas rather than dramatic resolutions, the essays in LEDwO also show him growing in his storytelling abilities.  His style is both more subtle and alive than I have ever remembered it.  Here he compares the beach at Normandy to a beaches in Hawaii:

The water runs from glacial to heart attach and is tinted the color of iced tea.  Then there’s all the stuff floating in it; not man-made garbage but sea garbage—scum and bits of plant life, all of it murky and rotten-smelling.

The beaches in Hawaii look as if they’ve been bleached; that’s how white the sand is.  The water is warm—even in winter—and so clear you can see not just your toes but the corns cleaving, barnaclelike, to the sides of them.

As if to resist the nonfiction classification of himself as a writer, Sedaris has also interspersed these essays with dramatic monologues meant to be performed as “forensics” by high school students who participate in debate teams.  These are wickedly funny, and satirize the political madness of contemporary America.  I would love to learn if high school students who might try to use these pieces will (1) understand their dramatic irony, (2) be allowed to perform such pieces, and (3) if both would occur at the same time.  It almost makes me want to judge debate competitions.

I am not sure I have challenged anyone’s beliefs about David Sedaris’s merits as an essay writer, except to say that if you already love him, you now have more reason to do so.  If you have never experienced his work, Let’s Explore Diabetes with Owls is an excellent place to start.