On the Road, After Living in Jack Kerouac’s House, Part 1

I am in Winside, Nebraska, the place my family called home from 1983-1988. I am sitting on a porch owned by family friend Lin Brummel, and her dog, Pickles, is beside me, enjoying the shade but ever-aware of the cats and anything else that moves. I am six days into a two-week road trip from Orlando, Florida—where I was the 51st writer-in-residence at the Kerouac House—to eastern Washington.

I planned the trip for two reasons. My friend Dona Black lives in Hinesville, GA, and said it would be a shame for me to be in the southeast without visiting her. The other reason was because I do not yet have the money to live and write in Winside for months…and I wanted to visit… I wanted to see what would come from a journey back to the place my family always meant to return to.

I’ve never owned a car—have always lived places where a car wasn’t necessary. When I went on Expedia to look at car rentals, Alamo was priced at $10/day! I immediately booked two weeks. The next day I went back online to extend the trip and the prices were around $100/day—Jack Kerouac’s spirit leaned on Expedia’s pricing for one day to give me an opportunity to go on the road. I am certain of this.

At my final dinner at the Kerouac House, a friend suggested I make a “Flat Jack” to take on the road, to take pics of Jack along the way. So I printed out some photos, backed them with 100% cotton drawing paper, and started out. Leaving the House was emotional. After three months, I have become close with a number of people, and I have enjoyed the warmth and support of a thriving literary community. I’ve also come to love Jack, his spirit, his work, his kindness. 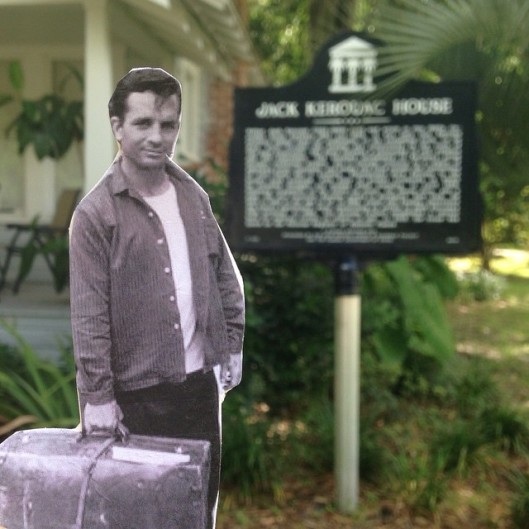 I drove to Hinesville on Friday, May 29, and Dona and I went for seafood. Crawfish are not to my taste, I discovered. We wandered Savannah all day Saturday, snapping pics with Flat Jack, which I posted with the hashtag #flatjackontheroad on Instagram and Facebook. I left early Sunday morning and drove roads with names like Horse Stamp Church Road and Crooked River and Wirebrush. There were armadillos, shells cracked open like eggs, on the sides of the roads. When the fog burned off, vultures swung slow circles against a too-blue morning sky.

The dirt was redder the further west I drove. I listened to the radio for a bit, catching 100.9 having a “Don Williams Weekend,” the “Gentle Giant’s” songs and other old country hits like “Sleeping Single in a Double Bed” and Charlie Pride’s “I Don’t Think She’s in Love Anymore.” A spattering of rain and such lushness as I drove through Alabama… Red Cliff Church Road, Fire Tower Road, and so many churches along the way, especially once on Highway 96. Confederate flags hung as high as American flags. Near Tupelo I was tempted to drive out of the way to Elvis Presley Lake, but didn’t.

In Kansas City, Missouri, I stayed with an artist from my San Francisco days, Bret Gottschall, and his wife Susan and almost-two-year-old red-headed son Donovan. As we sat with beers in the backyard, Bret picked up a firefly and I commented how small it was. “They are always this size,” he told me. “You were just smaller when catching them in Nebraska.” In the morning he picked up his guitar and sang “I Wanna Be Your Dad” to Donovan. The Gottschall visit, as with the visit with Dona, was wonderful.

I was about 50 miles into Nebraska when the landscape hit me—I felt a comfort, a kinship.

San Francisco is the place I consider most “home” as an adult, but Kid Ciara is still in Nebraska with skinned knees and wild red hair. There is an unabashed curiosity to how people approach you here. There are ponderosas and box elders and elms and small creeks, old farm houses and outbuildings in various stages of decay, and a sky that is at once close and so, so large.

My first stop as I drove into Winside was the Elementary School, where I spoke with the young principal and the replacement teachers for Mrs. Puls (first grade) and Mrs. Mann (fourth grade) about the bus driver who was let go when she retook her driving test to discover she was legally blind. I walked the halls, through the gym/cafeteria where I got a concussion when another student stepped on my shoe lace while we ran laps, and the library where I watched the Challenger explosion.

I was struck by how people move: with purpose. They don’t move fast, but there is a precision to it—many of these folks are farmers, and they understand both stillness and necessary motion. These are solid people, and they choose to live here, take pride in what they do. Their offspring get multiple degrees, and a few return. Winside is a rural community, yes, but one with a lot of success stories. There are people who don’t remember my family aside from our Wolfhound at the time, affable and docile Lefty, who was 185 pounds.

I left town and headed to Lin’s house, taking roads of thick gravel over red clay. I was able to drive straight in on the gravel roads yesterday, but today I had to take 35 over a mile before cutting in because half of Lin’s road is pure mud after an early-morning thunder and lightning storm. When I pulled up the driveway, Lin came out to greet me, still beautiful, and walked me around the property, lush right now with spring grass and flowers.

Today I went by the old Hansen place, where my family lived in the 1980s. 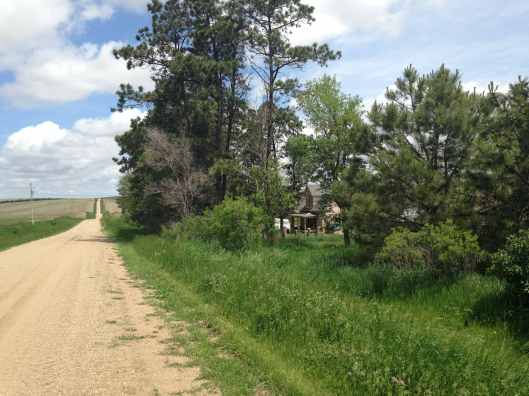 It is in disrepair, and Jim Hansen, the son of Lila, the woman we rented from for $50/month, uses it to milk goats (they make cheeses and butter) and birth goats and chickens.

There were goats on the back porch and all sorts of usable equipment and set-aside items throughout the house. It had once seemed so large to me, but now I see it for what it is: an old farmhouse with the necessary space to live comfortably. The sink I stood on a chair to wash dishes at. The old oil heater is still there, but detached, and they use a wood-burning stove now instead.

There is a bed in the parlor that Jim said is where he’ll go to if his wife, Julie, ever kicks him out of the big house they built just a bit down the road. Hansen said he would clean up the place if I ever wanted to rent it, so I’ll keep his number in hopes…because I wanted to clean everything out, buy a couple of old couches for the living room, an old brass bed for the room that had been my parents, and a pic of Samuel Beckett for the bathroom (my father hung one there and I was terrified to look at it at night, peeing in the dark or begging my older sister to go with me). I wanted to clear off the porch and get a couple old rocking chairs and sit there watching the next lightning storm roll in. I wanted neighbors coming in through the back door, without knocking, just like they used to.

The property has changed, too. Outbuildings have been subtracted and added. Jim Hansen has had to thin the row of ponderosas along the road, and the lilacs and tiger lilies have been torn out and replanted around their house.

The black barn is now red. The old apple tree with the tire swing is gone. The circle driveway is overgrown.

I drove a mile down the road to the Rabe’s and Carolynn’s sister Cheryle was there with the blonde grandkids she adopted when babies, and Art, the youngest of Carolynn’s oldest daughter, Wendy. These kids are Nebraska—wrestling, playing with ear-mite-ridden cats, muddy-kneed and running as they want around dozens of acres. We played at Jim and Carolynn Rabe’s place often when I was a kid, and there wasn’t much changed: hay baled like great loaves of bread and the smell of hogs. Carolynn now works at the meat locker downtown, and Jim works for the county, so both were gone. I drove downtown to catch up briefly with Carolynn and then stopped by the Winside Museum where Bill Burris was scraping and painting in preparation for the Q125 celebration later this month.

So here I am… on Lin Brummels’ porch, overwhelmed and nostalgic for the time when all this was mine. There is a place I visit in dreams. I am driving down a gravel road, fishtailing on gravel when I go too fast, sinking a bit into the soft spots. There are farm houses every couple miles. In the dreams, I feel this place is home. I know the turns, the hills, the small copses of trees. I miss the Pacific Ocean every day, but today, as I drove country roads just to be on them, I realized the place in those dreams is Winside, and that I have retained so much of this place: how different the gravel is here—thick and fine and varying shades of red and orange, the smell of the dust and the livestock and crops, how despite the hills it seems flat because the sky is so blue and close. I feel comfortable and safe. I feel at home and know that when I leave in another day or two, I will yearn for here as much as I do for the Pacific. And I will find my way home again and again, because that is what Winside is.

Ciara Shuttleworth was born in San Francisco and grew up in Nebraska, Nevada, and Washington state. Her poetry has been published in journals and anthologies, including Alaska Quarterly Review, Confrontation, The New Yorker, The Norton Introduction to Literature 11e, Ploughshares, and The Southern Review. Shuttleworth received an MFA in poetry from University of Idaho, a BFA in painting/drawing from San Francisco Art Insitute, and a BA in studio art from Gustavus Adolphus College. She was a 2014 Jerome Foundation Fellow at the Anderson Center at Tower View, and The Jack Kerouac Project of Orlando’s 51st resident at Jack Kerouac House.