Ever since I noticed that Jon Finch, who played the title role in Polanski’s Macbeth, looked like Max Von Sydow, I’ve been suffering from some degree of Sydowmania.

The Swedish actor who played chess with Death in The Seventh Seal has recently lent his gravitas to The Force Awakens and Game of Thrones. He has played Ming the Merciless, Jesus Christ, and one of the incarnations of Bond villain Ernest Stavro Blofeld. He is 87 years old, and a titanic talent.

What shocked me is that he has never actually been in a Shakespeare film, as far as I could remember. Is this possible?

Oh, right. He starred in Strange Brew, the zany comedy starring the lowbrow hijinks of two dimwitted Canadian brothers, Bob and Doug McKenzie, whose lives are devoted to the consumption of beer, not that this consumption has any bearing on their general moronitude. 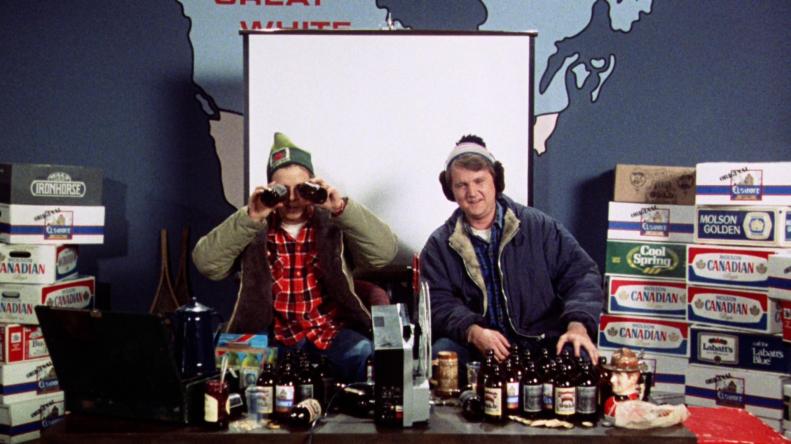 When Rick Moranis and Dave Thomas transferred these clownish characters from the small screen to the big screen, they decided that these two buffoons could best serve a larger, more epic story than a silly one of their own. At first, Strange Brew seems to be a metacinematic experience about Bob and Doug McKenzie’s failure to produce a Hollywood film. The plot takes a turn, however, when they make a visit to the Elsinore brewery to try and cadge free beer, and find themselves, like Tom Stoppard’s Rosencrantz and Gildenstern, in a tragic story of a family broken by betrayal.

Max Von Sydow plays a part that should be familiar to any fan of Hamlet: the mad scientist.

So Elsinore is transferred to a brewery, the way so many modern productions of Shakespeare’s work reinterpret his settings. And the brewery just happens to adjoin a mental institution run by the brewmeister of Elsinore beer.

You know he has to be evil, because, you know, the turtleneck sweater.

Because scientists often practice in separate disciplines of science, such as beer-making and psychiatry, no one was curious when aggression and mind-control experiments were performed involving chemically-treated beer and hockey players.

Okay, so maybe the thread leading our way back to Hamlet happens to be rather slender, but then why have the scene in which Claude cajoles his daughter-in-law Pam (presumably short for Pamlet) for being mean to her mother, Gertrude, and holding on too hard to her grief over her father’s death?

You know, Pamela, I don’t want you to think that your mother and I don’t understand how you feel about losing your father.

If it had been ME, you’d have been over it by now.

It’s easy to wallow in self pity–the hard thing is to go on living….

Don’t you think it’s a little unusual to get married so soon after the funeral?

I find this moment touching, since Strange Brew follows a classic Marx Brothers plot scheme, which is to say that the clowns subvert the story of straight, serious characters around them, and the existence of these straight plots is merely to provide a comic armature and maybe some eye candy. (I am looking at you, Zeppo Marx.)

That the seriousness of the A plot becomes momentarily real and Shakespearean is moving. The implication later on that Pam will be perpetually drugged into an unresponsive state is also an odd touch of bona fide storytelling. (Basic catatonia is what Gertrude wanted for her son, isn’t it?) Dave Thomas and Rick Moranis wrote and directed this movie, and while this appropriation of Hamlet is more of an in-joke than a real engagement with the text, nevertheless, the dynamics between the Elsinore family were thought out carefully. The film would have been more memorable if there was just a little bit more tension between telling a real story and relishing in a comedic romp.

In Shakespearean comedy, the rougher clowns tend to be clearly secondary characters who do threaten to steal the show, but ultimately never quite do.

One of the interesting implications is that in this retelling of Hamlet, Claude is a boob, whereas the truly dangerous person is Polonius. The part, though, is written as boilerplate 1970s TV show villain. Max Von Sydow, nevertheless, seems to have had a good attitude about the work.