Something Rich and Strange 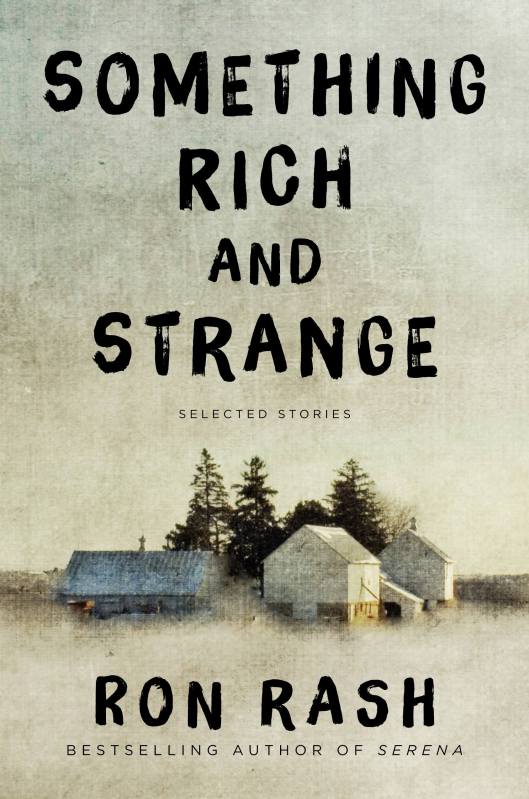 This is less of a book review and more of a public service announcement:

If you’re not reading Ron Rash, you should be.

To put it simply and to risk using an already overused word, he is awesome. If you worry that you’re late to the Ron Rash party (and you should be worried), then Something Rich and Strange, a compilation of thirty-four previously published stories released last year by HarperCollins, is a thorough and satisfying crash course.

Here’s what you need to know about Ron Rash: he grew up in the Piedmont of North Carolina, eventually making his way up into the Blue Ridge Mountains, a spot he rarely leaves. He is a professor in Appalachian cultural studies at Western Carolina University, and most of his fiction is set in the highlands of western North Carolina.

I know you may be groaning. I can even imagine a few eye rolls. Another southern regional writer? What is it with these people who grow up in the Deep South?

Fair enough. We do tend to be slightly obsessed with our homeland.

And yes, Rash’s fiction is very much fiction of place, but there is more to it than location, landscape, and being “southern.” Oh, sure, all that you would expect from southern writing is there: a certain conservative world view, all-encompassing fire-and-brimstone religion, clear and significant class divisions, agricultural society, race, and (of course) the Civil War. And themes of nature, landscape, and environmentalism are widely regarded as hallmarks of Rash’s work. But place and capital T “The” and capital S “South” are not—at least to me—what makes his work worth reading.

His work may start with place, but really it’s about voice.

Voice is how Rash captures place. It’s what leads to great characters, too. The voice is at once uniquely southern and Appalachian but unique to the individual character. Sometimes that voice is very, very funny, as in the case of the female carpenter trying her darndest to stay out of her ex-husband’s cockamamie (and Biblical) schemes in “The Night the New Jesus Fell to Earth in Cliffside, North Carolina,” and sometimes that voice is so melancholy and hopeless that it borders on the existential, as in “Those Who Are Dead Are Only Now Forgiven,” wherein a young man gives up on a college education in an honorable but pathetic attempt to rescue his high school sweetheart from the scourge of meth addiction.

The great thing about Rash’s grounding his characters in voice instead of place or landscape is that it lends them a humanity, a realness, instead of letting them be bogged down in caricatures of southern Appalachian clichés. And this is no accident. Rash uses his own characters to warn us of buying into the hype so often exploited by today’s “redneck chic” reality television. In “The Trusty,” a Depression-era chain gang convict falls for those same stereotypes, and it costs him his life. There’s the Yankee game warden in “Their Ancient, Glittering Eyes” who refuses to believe the stories of a giant fish in the Tuckaseegee River and who refuses to take the old men who catch that fish seriously. Rash is forcing you to take these people seriously, to acknowledge the dignity of all his characters, even the most backwoods, dirt-floor-poor among them, and to recognize a common human experience. This is what all good regional fiction does—disguises the universal in the particular.

If Rash’s short fiction is not only about place, it is also not Grit Lit, the current buzz-genre in southern literature. Henry Crews is widely credited with creating the term that has been referred to as redneck stories, white trash literature, even southern noir. A play on words, referring both to “gritty” stories and the grits so commonly devoured by southerners of all classes, Grit Lit centers on the lives of the rural (usually white) poor, and the tales are full of single-wide trailers, drugs, guns, fights, and almost unspeakable violence. While I admit to reading and enjoying the work of Crews, William Gay, Tom Franklin, and others, there are a few problems with Grit Lit: Most of the writers are men, and commonly the Grit Lit stories they write would not pass the Bechdel Test by a long shot. Grit Lit stories tend to ignore a significant portion of the southern population, namely that portion with darker skin. And at times it seems the writers of Grit Lit are locked in a battle to see who can write the most violent, repulsive characters imaginable, as if they’re all trying to out-Cormac-McCarthy Cormac McCarthy himself.

And you will certainly find some of this in Rash’s writing. But if Rash’s work is gritty or violent, it’s more a product of place than some attempt to shock readers into listening to the stories of the poor and marginalized, which leaves his work more in the realm of regional literary fiction, harkening more to the original notion of Southern Gothic with its preoccupation with the spooky and grotesque. “The Corpse Bird” hinges on long-held superstitions about death, and “Shiloh” suggests the existence of ghosts and spirits. And Rash gives us grotesque, as in the branding of an Englishman’s tongue by Scotch-Irish mountain folk exacting revenge for the massacre of their ancestors centuries before in “A Servant of History,” the repeated “faces of meth” images that litter a number of these stories like trash on the side of the highway, and the ill-fated escapades of the modern-day grave robbers in “Dead Confederates.” But there’s a difference between “grotesque” and “violent,” especially what can often feel like gratuitous violence. Thus, Rash’s work never becomes some version of literary gore porn, and his characters never fall into the trope of brutish redneck. Yes, his characters are often savage, sometimes noble, but Rash never condescends to them or allows them to fall into stereotypes (southern or Grit Lit-y). Instead we get characters with an intense love of the land, of home, coupled with an unspoken desire to escape it, leading to a quiet desperation that plays out in the decisions they make.

This is why you need to read Ron Rash. And don’t forget that Rash is also an accomplished poet and novelist. 2008’s Serena was a New York Times bestseller. But if short fiction is your thing, or if you just want to dip your toe in the clear and cold mountain streams of western North Carolina, Something Rich and Strange is a mighty fine place to start.

Dianne Turgeon Richardson (Episodes 72, 77, 102, and 129) is a writer of fiction and poetry. Her work has appeared in The Florida Review, Cooweescoowee, and Word Riot, among other places. She received her MFA from the University of Central Florida, where she currently teaches freshman composition. Originally from South Carolina, she now lives in Orlando with her husband, her hound, and a fetus whose arrival is imminent.