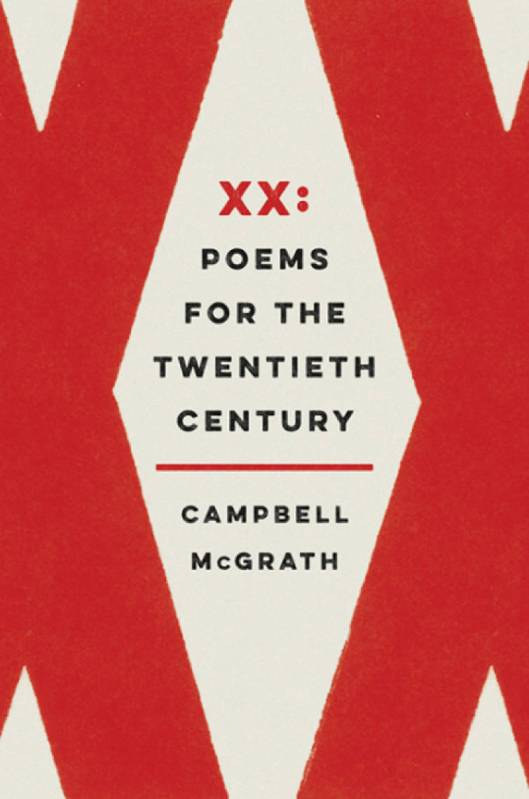 “Epilogue: 2016,” the first poem in Campbell McGrath’s new book, XX: Poems for the Twentieth Century (HarperCollins, 2016), emphasizes the idea of leaving a record, ”a scattering of crumbs,” not for subsequent generations, but for whatever inherits the earth after humanity destroys itself. The book’s more fun than it sounds. It’s also a tall order. XX includes a poem for each year of the twentieth century and seeks to be a poetic record of one hundred years on earth. The publisher says it “encompasses the entire century of art and culture, invention and struggle,” and that’s almost true.

The book contains persona poems in the voices of Picasso, Matisse, Kahlo, Edward Bernays, Orson Welles, Virginia Woolf, Joseph Goebbels, Chairman Mao, and many others whose impact on the global culture are far-reaching. Artists and writers get the most space, but by the numbers the book’s central figures are Picasso and Mao. They take twenty poems between them, with Picasso often sharing space with his rivals or lovers. McGrath seems to be saying that the twentieth century’s defining moments were artistic or militant.

Art and war intersect in these poems frequently, most beautifully in “Guernica (1937).” McGrath writes in Picasso’s voice, “Now, with paints and brushes, I march to war”:

A brush is a weapon of vengeance in the hand of Picasso,

to strike down death-merchants, haters of modern painting,

[…] With pencil, with chalk, with a brush I shall seek its form–

with my hands I shall remodel what tyranny deforms.

McGrath is a poet with cinematic flare. The persona poems are the close-ups, but he also zooms out periodically to show the big picture with collage-like poems that orient the reader in the century. I’m not sure how all of them would read on their own, but in the context of the book, these list poems are some of my favorites:

Uma Thurman is an infant. Princess Diana is a shy girl

in boarding school; she will not survive the century.

Tupac Shakur is born but he will not survive it.

Jim Morrison dies in a bathtub in Paris–no one here gets out alive.

It’s useful, as a reader, to understand some of the context in which, for example, Apollo becomes “the vessel of our dismantling” or Mao claims that the “destruction of mankind / would be a small thing in the universe.”

In one of these “newsreel” poems, the book makes its most dramatic shift. “The Pulse of the Planet (1962)” ends, “I am born.” Suddenly the poet is a character in this strange, beautiful, war-mongering century. The historical literally becomes personal. It’s a reminder that history is not abstract or distant, but something we’re all living.

XX is a varied, engaging, memorable, and deeply ambitious book.

Pair with: a flight of really fine international beers.

Amy Watkins (Episode 124, 161, 164, and 192) grew up in the Central Florida scrub, surrounded by armadillos and palmetto brush and a big, loud, oddly religious family, a situation that’s produced generations of Southern writers. She married her high school sweetheart, had a baby girl and earned her MFA in poetry from Spalding University. Her chapbook, Milk & Water, was published in 2014 by Yellow Flag Press.

2 thoughts on “Buzzed Books #39: XX: Poems for the Twentieth Century”