Jim Sterling is a British born videogame journalist living in Mississippi and one of my inspirations. With a sharp wit punctuated by the passion of a religious zealot, he reports on the industry on his show, The Jimquisition. In between shows, Sterling releases shorter pieces like  Squirty Plays, which are first impressions videos that focus on games from Steam, the digital distribution service.  One such video set off a feud between him and an indie developer that would go on for years, culminating in a court case that could mean life or death for Internet criticism. 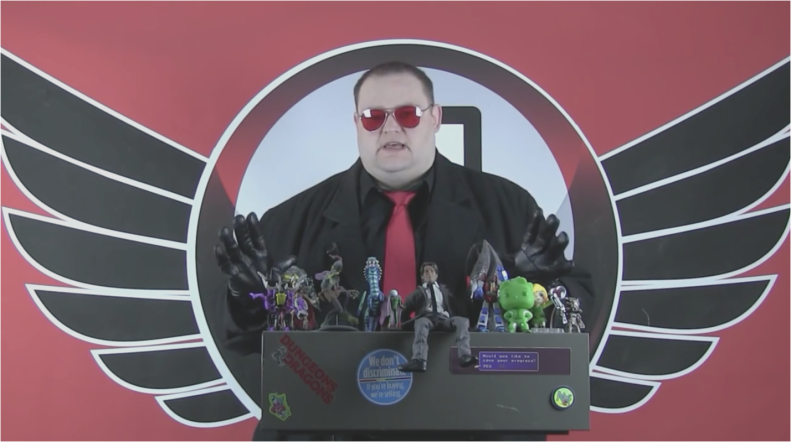 The developer in question is Digital Homicide (DigiHom), a small outfit that uses the open source Unity engine to produce games. One game of their games is The Slaughtering Grounds, a horde-based first person shooter. Jim discovered the title on Steam in November of 2014 and found the technical quality poor and unfinished with an aesthetic of disparate artistic assets. When Sterling posted a Squirty Play of the game, the preceding conflict between the two involved many exchanges over the course of almost two years.

In retaliation, DigiHom released a video called Reviewing the Reviewer, which was just Jim’s Squirty Play with a text overlay commenting on his commentary. Most of the annotations were insults akin to a child having a tantrum, critiquing Sterling’s character, and treating the video like a review. Rather than ignore the meltdown, Jim found the video quite hilarious and uploaded a response of him laughing at DigiHom’s humorless hyperbole.

After some drama on the Steam forums, a brief moment of calm, and Jim covering the rest of DigiHom’s game library, Robert Romine, one of two brothers behind the developer, challenged Sterling to an interview in July of 2015. In the 98-minute conversation, DigiHom questioned Jim’s ability as a critic, his personality, and called to attention his own use of premade assets, a big point of contention. Romine then demonstrated a gross misunderstanding of definition in regards to Fair Use and Copyright Law. He also accused Jim of harming him financially and emotionally by attacking his company by commenting on their games.

While the debate/interview was quite entertaining as DigiHom made arguments that essentially refuted themselves like a snake eating their tail, that 98-minute one-sided argument set off a whole new stage of the feud. In the following months, DigiHom would rebrand themselves multiple times to mask their releases, give away download keys of their games in exchange for votes on Steam Greenlight, and launch a smear campaign against Sterling that allegedly made death threats. The situation proved rather alarming because despite Jim’s impersonal covering of the subject, DigiHom remained steadfast in their pursuit to fight back. They seemed unable to separate themselves from the conflict and move on, taking every chance to stir up trouble.

All the drama and turmoil culminated in a civil suit filed back in March of this year. Robert Romine’s brother James is suing Sterling on 10 counts of libel involving damage to DigiHom’s reputation for about $11 million dollars. The available court documents (55 pages to be exact) list the various charges and background in which the instances of libel took place.  The evidence of each moment is detailed and extensive, tracing back to when the feud first began with every joke, comment, and detail of relevance cataloged for reference.

How the case is progressing is unclear, but there is an obvious toll this debacle is taking on Sterling’s life. In a couple of the more recent episodes of Jimquisition, he has displayed signs of distress as the mounting issues related to the case have affected his ability to keep up with work. While any lawsuit can bring out the worst in people, the meaning behind the case is transcendent.

Being a critic with only a couple years experience, I have yet to be attacked on the basis of my work. Apart from critiques on quality, I have not been insulted for my opinions by people who found them offensive. Of course, I am not popular enough to incur such wrath, but I see where DigiHom is coming from.

Writers and artists pour their heart and soul into their work and expect at least some gratification when making their efforts public. No matter what we want our work will always be judged and we must decide if complaining about criticism is worth making our own lives miserable. Considering all the drama, DigiHom clearly lacked the mental and emotional fortitude to simply let their hatred for Sterling pass and move on with making videogames. Their drive for retribution has led them to the utmost extreme and they are bound for a failure that will have a ripple effect across the industry of Internet criticism.

There is a right answer, but because there has been no decided court hearing, we have to wait until judgement is rendered. I also wanted to keep it open to the reader because not everyone thinks Fair Use is just and some people see criticism as bullying regardless of the subject matter.  Yes, both Sterling (the critic) and DigiHom (the creator) are small players, but their case represents a turning point in the conflict of Fair Use, Copyright, and Content ID.  The verdict will either reaffirm that Fair Use is fair in regards to critics, or that creators can get away with destroying a critic’s livelihood because they did not like the criticism.