The Curator of Schlock #151 by Jeff Shuster

(His name is Quiller and he’s got a memorandum.) 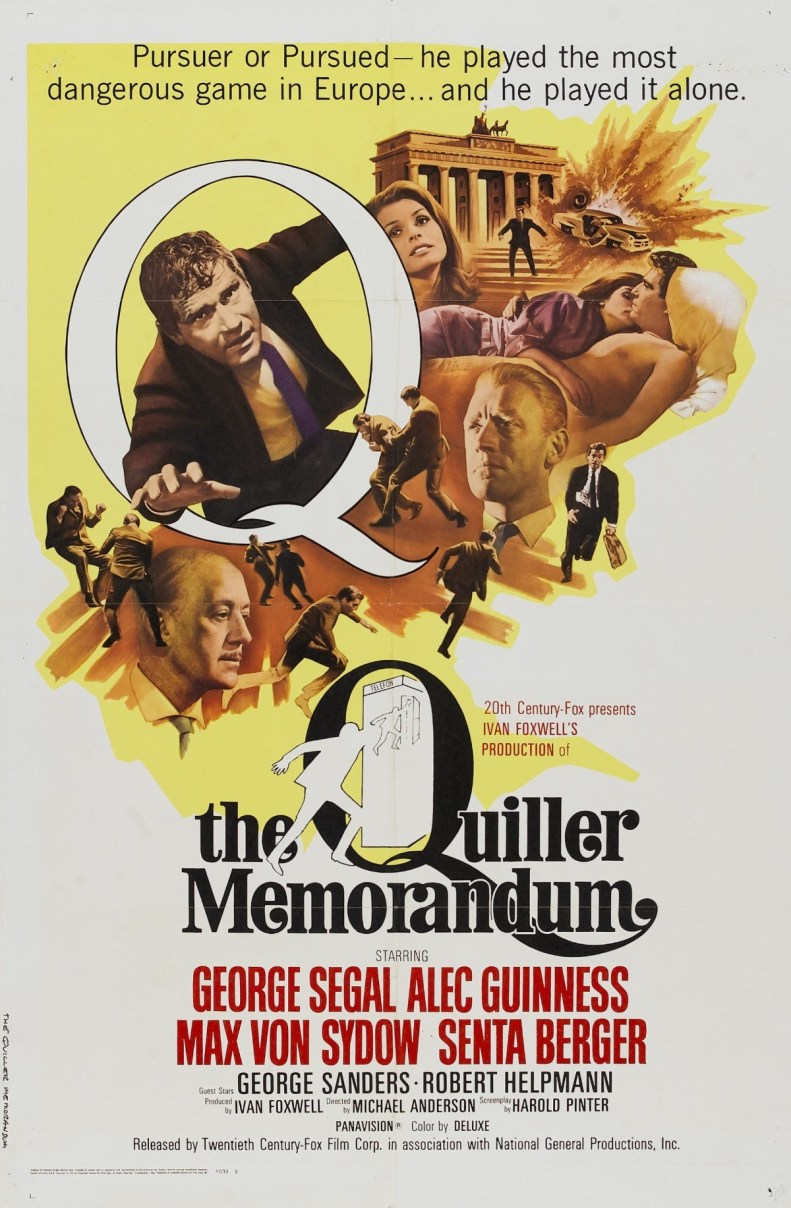 There’s a scene in the beginning of The Quiller Memorandum where a couple of English gentleman are eating lunch at a fancy restaurant. One is eating pheasant and declares that it’s rather good. It dawned on me at that point that the English like to use the word rather quite a bit. I don’t think I’ve used rather as an adjective once during these reviews, but I’ll use it now. The Quiller Memorandum is rather good. I hope you enjoyed this review. Tune in next week for my review of Casino Royale.

Oh, you want to what makes this movie rather good? Well, there’s this guy named Quiller (George Segal), and he’s a spy. Quiller is over in West Germany because some Neo-Nazis killed the last spy they sent over. The head of the Nazis is a guy named Oktober and is played by Max Von Sydow.

So Quiller is over in Germany trying to find the secret Nazi hideout. The Nazis find him first and keep injecting him with drugs and stuff, hoping he’ll spill the beans on who he works for. He doesn’t give up the information. I think he steals a cab at some point and later fakes his death so the Nazis think he’s dead. Honestly, the whole thing plays like the teaser of a Bond movies that was padded out for two hours. And Quiller’s suits keep getting messed up, unlike Bond’s. I guess this was supposed to be a gritty, rather realistic spy movie.

The DVD has one of those audio commentary tracks where experts talk over the movie giving you all kinds of useful tidbits. Like how the villains in these spy movies tend to very erudite. They’re learned men who are also quite witty.  You’d rather be stuck sitting next to one of them on an airplane ride rather than the hero. Maybe this is why I always like Bond villains so much. Maybe they’re just interesting people who just happen to also want to destroy the world. Nobody’s perfect.

For this commentary, we have film historians Eddie Friedfeld and Lee Pfeiffer. Lee Pfiefer is an editor over at Cinema Retro magazine, one of the coolest magazines I’ve ever seen. It covers cinema from the 60s and 70s in thick, journal quality volumes. I’ve been tempted to subscribe for a while now, but am terrified at the prospect of adding more books to my shelf. We’re entering a critical mass situation here.

Ahhh! The current issue features Enter the Dragon on the cover! Must resist subscribing! There’s an article on Starcrash too! Must resist…