In the Shadow of Edgar Allan Poe 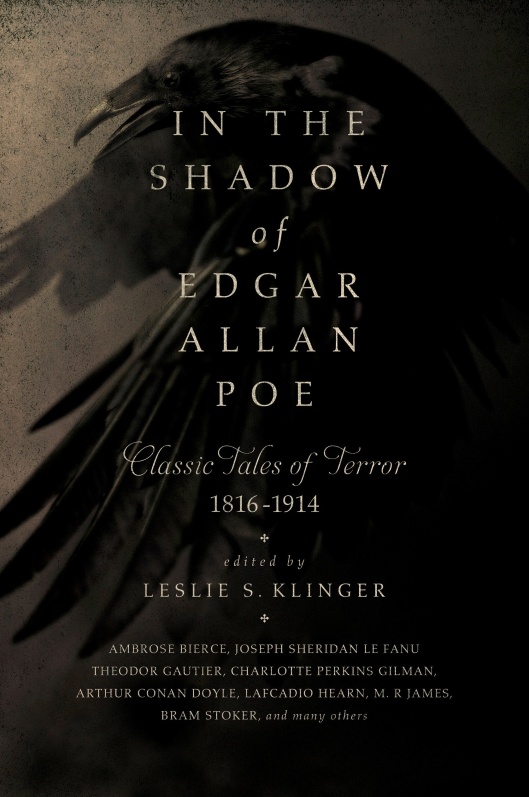 The title of this anthology originates from these stories’ obscurity, as Klinger claims they “have been lost in the shadow of Poe.”  One thing that sets these stories apart from general horror stories is that these writers are more known for their contributions to literature, fantasy and science fiction. These authors are telling stories that happen to be sublime in their visions of horror rather than simply trying to spook or gross out the audience. There is a humanity there for which the reader can feel anxiety rather than mere anticipation of horrific occurrences. These seemingly bygone literary qualities feel refreshingly vibrant.

One of these curious techniques that occur in some of these stories is the breaking of the fourth wall.  In this, the narrator (sometimes writing in the form of a letter) goes as far as to recognize and playfully observe upon the oddity his or her lengthy explanations.  This self-awareness is almost post-modern, and diminishes one’s sense that these stories are mindlessly artificial stories.

An example of this can be found in the first story of the anthology, “The Sand-Man.” E. T. A. Hoffman depicts an account of a young man who slowly loses touch with reality and attempts to convey his convoluted concerns to his family members through verbose letters.  When Hoffman interrupts the tale to remind the reader that this is a fictitious story, oddly this adds to the darkly psychological flavor of this central theme, the dangers of delusion.

Leslie S. Klinger’s thoughtful footnotes enrich these old-fashioned stories. An example can be found in “The Leather Funnel,” by Sir Arthur Conan Doyle, who portrays two gentlemen who conduct an experiment to determine the unknown history of a medieval torture device by dreaming next to the object.  The protagonist experiences images of a notorious murderess who, in the 1600s, was accused of killing fifty people.  At the very end of the story, a lengthy footnote provides shuddering details about the actual historical investigation of the murderess’s alleged accomplices, who were certain members of the bourgeoisie. This hysteria-driven investigation is spurred by the murderess’s recorded words in history, which is found in the last footnote rather than in the story itself. This footnote goes on to claim that these bourgeoisie members were later accused of poisonings and witchcraft after the murderess’s death sentence.

What makes this particular footnote intriguing is that not only is it, in a sense, a story within a story but also it amplifies the eerie tone for the ghastly visions the protagonist experiences, a final chill down the reader’s spine immediately after the last words of Doyle’s story.

Klinger’s carefully selected compilation is worthy of the Gothic reader’s library of horror, drama, and the bizarre.

Shawn Whittington (Episode 156) is a writer living in Orlando, Florida.