My favorite pastime is watching Jackass, The Eric Andre Show, and other people hurting each other for comedy. The appeal is seeing someone do the things I cannot and reveling in their stupidity. One could argue the Internet allows such content to thrive, and that we have an inherent desire to see people hurt themselves. Not often enough do we notice the depth of misery these individuals probably endure. Why would they self-harm unless they hated themselves, and wanted to feel something other than depression? Misery is inherent in YouTube comedians like BroTeamPill, but upon watching his Minecraft Story Mode videos, I saw something much darker.

Story Mode is an episodic title based on Minecraft, a survival game with a heavy emphasis on creativity. The developer Tell Tale is best known for episodic games based on intellectual properties like Walking Dead, Fables, and Game of Thrones. In total transparency, I have never played a Tell Tale game, so I cannot attest to the accusation that the games’ choice system is meaningless. From what I have seen, no matter what decision you make, the outcome is always the same.

However, I can confirm that Story Mode can be played without playing. Most of the dialog choices and quick-time events are timed and if you choose not to press any button, the game will make the choice for you or you fail without consequence. You can miss a prompt and progress like nothing happened. In YouTube gamer culture, this is known as a “Fail-Through.”

Before uploading his videos on the game, BroTeam played Life is Strange, the acclaimed episodic series best known for including LGBT themes. To make his play-through interesting, he made up a drinking game where you take a swig when the characters said cringeworthy or stupid dialog. As a result, he became very intoxicated. Following the same formula he set out to play Story Mode, taking a drink when exposition was delivered as characters were walking in a hallway, when his predictions came true, when the game played itself, and when the characters were left in a room leaning against the environment.

The first video titled “A grown man decides to play Minecraft Story Mode” began as expected with wheezing laughter, many sips taken, and bathroom breaks between cuts. He intentionally failed the button prompts that would result in success regardless and picked the ellipses option in dialog that did not interfere with progression. In his commentary, BroTeam related not wanting to proofread a paper to the writing of the game and how older titles with fail-states gave him gratification as a kid.

In the follow-up, “A grown man decides never to play Minecraft Story Mode,” his commentary did not change from the last video. As he continued to play, however, I noticed an escalation in BroTeam’s general despair. He knew what to expect with the lack of fail-states, bad writing, and story tropes, but his reactions came with a hint of hopelessness behind his reactions.

I thought nothing of it until Tell Tale released a fifth episode of Story Mode and BroTeam put up another video called “ok I played the minecraft stories again.” That was when I think he realized nothing would be good ever again. All the flaws of the game and those shared by others will always be there because that is what contemporary games have become. He has seen the seams that hold together modern gaming and could not help but unravel them. Underneath that skin of mediocrity, cut corners, and bad writing he found an abyss. In that abyss he saw the good old days were gone and future was just more of the same.

More dialog options and choices that led to the same outcome. More story tropes that were so formulaic Blake Snyder would approve. And no more fail-states that used to make games worth the challenge. Already affected by the superficiality of game culture that birthed his nihilism, BroTeam found himself in an endless nightmare where these ideas have become reality. Gamers would consume them without thought like mainstream news or fast food. They just like them because they are games and games are supposed to be fun, right?

The worst part is BroTeam did not stop playing them. Like a martyr punishing himself for the greater good, he played more episodes of Story Mode as they came out. While his reasoning is probably far beyond my own, I believe he played the game to point out the flaws. He wanted to show everyone what modern gaming has become to expose the mediocrity and criminal incompetence. By getting drunk playing terrible games, he showed us what must be fixed to restore games and the industry to their former glory. 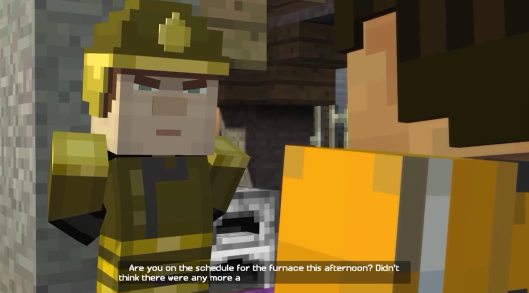 Perhaps I am thinking too much about simple highlight reels from live-streams of a fat Canadian getting smashed. I should not be surprised at BroTeamPill’s reactions because I have been a fan feeding off his misery for years. After so much delight, I finally felt bad for laughing. I would never subject anyone to play a videogame like Minecraft Story Mode, and I know that because of him. He stared into the abyss and returned with a dire warning that we must heed if we want games to be good again.