As I suggested when I reviewed Kurosawa’s Ran, King Lear is an epic fucking bummer. It begins with a heartbreak that destroys a family, and then the plot degenerates until the very notion of integrity and decency and nobility, along with a kingdom, is destroyed.

The essence of the horror of Lear is expressed by Edgar, the son of an earl who assumes many disguises when his half-brother frames him for treason: “And worse I may be yet. The worst is not / So long as we can say ‘This is the worst.’” (IV, 1).

The characters in Lear never stop talking about their worsening, dreadful fates.

Despite the presence of a clown, who will eventually be hung, offstage, this is not one of those tragedies leavened with comedy. At least it doesn’t feel that way. It’s like Game of Thrones without the wit of Tyrion Lannister or the dragons or the sex.

Hamlet is somewhat likeable, as is Othello, so we can root for them despite knowing how tragedies end. But the folly of King Lear, who decides to retire as king and divest his power between his daughters in a ceremony in which he invites them to out-boast one another in their love for him, feels like too big a burden to bear as viewers. Normally, at least.

Laurence Olivier, in his final performance of Shakespearean work, is another matter 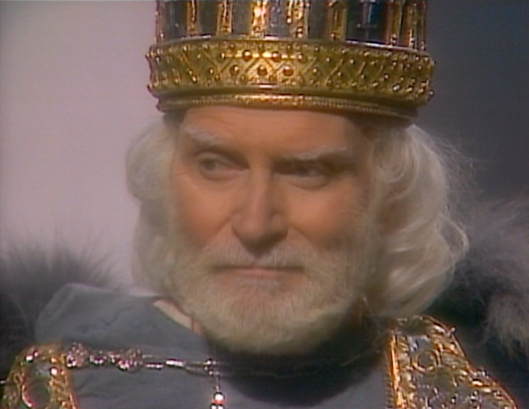 It took me about 15 years of being a Shakespeare junky to appreciate Olivier. At first, he seemed like the epitome of the unhip, pre-method actor who seemed little more than a vocal instrument. As a result, I don’t worship Olivier, nor do I worship the idea of Olivier (some purist notion of Shakespearean presentation). When I praise him, I do so without nostalgia or sentimentality or Anglo-philia. Generally speaking, he is a bold interpreter of Shakespeare.

Olivier successfully threads the needle of this difficult part: he persuades us that he has been a strong king, but one who is not Machiavellian enough to foresee how the Machiavels in his own family might undo him. He can remind us of a grandparent of advanced age who is emotionally unprepared to deal with the sturm und drang of the world he lives in. The dialectical emotions involved—pride, anger, shame, sorrow—can simultaneously appear in a single line of Lear’s, as delivered by Olivier. And in terms of his gestures, Olivier enacts Lear’s sense of melodrama when his self-image will be denied by his daughters. We see a strong man grow weaker and madder throughout the play.

In the opening scene, Olivier wears a crown so large that it seems commensurate with his grandiose ego. Tanya Moiseiwitsch seemed to have too much fun with that choice.

Michael Elliott’s film was made for television, but we shouldn’t hold that against him.

One of the oddities of this production is the sparse set, which is only one or two notches above minimalist. There is a Stonehenge for the more fateful scenes, and some castle exteriors and a few medieval interiors and one silk-flower forest that may have previously appeared on The Muppet Show. But the lighting is very dark, so that a black background gives the largest color impression on the viewer, and that certainly fits the mood of the story. Because the set is mostly not there, the cheapness of the set seems of little importance (unlike the elaborate, yet unpersuasive sets of [the BBC versions]). Sometimes Shakespeare’s language is quite well-served by placing the work in an abstract imaginary space, as indeed was the case on the Elizabethan stage.

Dorothy Tutin as Goneril and Dianna Rigg as Regan.

The other actors of this production are also excellent, including the divine Dianna Rigg as Regan, and Leo McKern (Bugenhagen from The Omen!) as Gloucester. 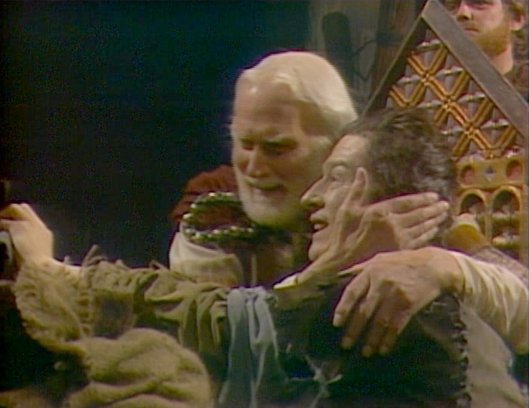 John Hurt plays the fool, but this is not a memorable performance, but that may be because the part is so disappointing. Feste, in Twelfth Night, now there’s a fool!

Her Cordelia can foresee the doom that will follow her inability to express her sublime love for her father, and especially to have it counted alongside the purely rhetorical expressions of her older sisters. There is a certain loopy innocence to her performance that makes the performance complexly layered and makes this difficult character rather likeable.