The Curator of Schlock #201 by Jeff Shuster

(I thought Christopher Lee was in this one.)

Blog 201. Only 99 more to go before I get to 300. Only 700 more after that until I get to 1,000. I will be the world authority on schlock if I have to lie, cheat, and steal to get there. This week we’re taking a break from the schlock and wrapping up October with a super scary tale of terror known as “the Citizen Kane of movies.” That’s right. We’re venturing neck deep into 2006’s The Wicker Man from director Neil LaBute. This movie also stars Nicolas Cage. Funny how I’ve covered 200 movies so far and not one of them starred Nicolas Cage.

Nicolas Cage stars as Edward Malus, a California police officer who spends most of his days pulling over speeders and giving them tickets. One day, he pulls over a mother and her little blonde girl after the blonde girl tosses her toy doll out the passenger window. Malus gives the doll back, issues a warning, the mother apologizes, and a big mac truck hits the car.

Yeah, it came out of the blue for me, too.

The car catches fire. Malus tries to rescue them, but is knocked unconscious after the car explodes. The police can find no records of the car or the mother and daughter. There is nothing to identify them with, almost as if they didn’t exist.

That’s the genius of The Wicker Man. Most movies would tie that scene into the thread of the plot, but it really does nothing to further the plot. It’s just kind of there like hangnail you can’t rip off. Anyway, Malus gets a letter from his ex-fiancée, telling him that her daughter has gone missing on some island off the coast of Washington, an island made up of an Amish-style community, if the Amish were a coven of witches!

Of course, Malus is too stupid to know what he’s getting himself into. He pays off a deliveryman to fly him over to the island where he’ll start his search for the little girl. The locals aren’t too friendly, saying they don’t recognize the girl while heaving huge burlap sacks that drip blood. It’s interesting how Malus doesn’t seem concerned enough about this to investigate. I guess the missing girl takes priority, especially when his ex-fiancée reveals that the missing girl is his daughter. 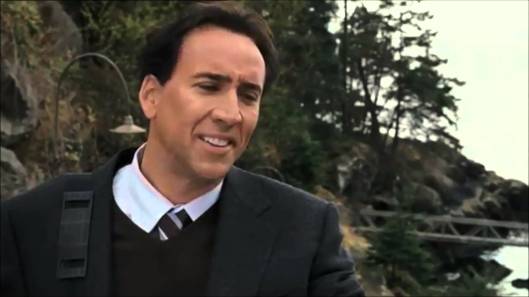 Did I mention that there are bees in this movie? Yeah, it seems that the island’s main crop is honey, but the honey crop wasn’t so bountiful last year. I guess the bees just weren’t feeling it. Still, that doesn’t stop them from nearly stinging Malus to death. He’s allergic you know. 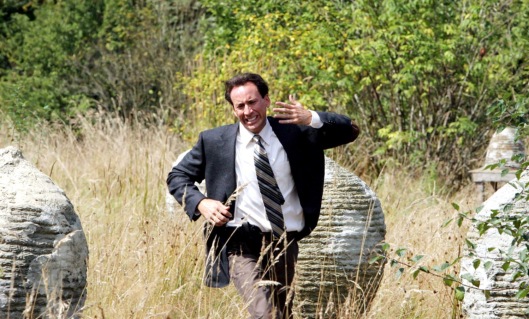 As the movie goes on, Malus becomes suspicious that the townsfolk are going to sacrifice his little girl to some earth goddess so their honey crop will become bountiful again. All is not as it appears, but you will have to check out this seminal thriller for yourself. Don’t be surprised if you see a cameo by a Mr. James Franco. That’s all I’m going to say.

Oh, and the townsfolk break Nicolas Cage’s legs and pour a bunch of bees onto face as he yells, “Oh, no. Not the bees! Not the bees! Aaaaaaaaaaahhhhhhhhhhhhhh!!!” To be fair, I’d probably feel the same way if some witches shoved a hive full of bees in my face.