When George Mouratidis asked me to launch his first collection of poetry, Angel Frankenstein, I decided to talk about the cover, rather than the work contained therein. 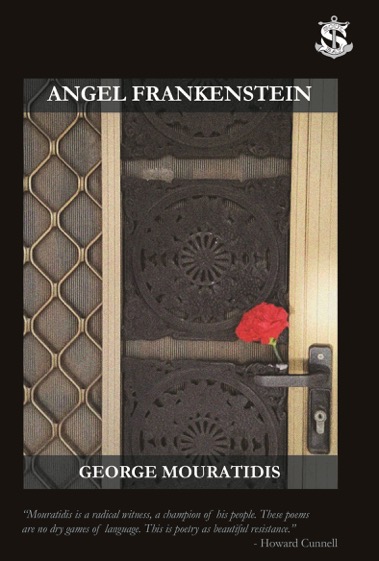 The jacket speaks volumes. It tells us everything we need to know about the poetry and about the poet. It is a rare instances where a proper study of the cover is essential to an understanding of the work.

Let’s begin with the image. A carnation stuck in a fly-screen door.

It’s probably all these things in equal measure.

It’s definitely woggy*. And it’s most certainly recognisable for any Greek who grew up in Melbourne in the 1970s and ‘80s. I look at that image and a part of me smiles, while another part shudders. It brings back memories, some happy, some not so happy. It’s everything I grew up with in Melbourne and everything I wanted to get away from at a young age. I know that’s how George feels as well.

Objectively speaking, the image represents a time and place, frozen in a moment. It evokes a ritual and way of life that is pretty much dead. This is what first-generation Greeks did when they dropped in on friends and relatives—as they did invariably unannounced—and found no one home. They left a flower in the grille of the fly-screen door to signal a visit.

Greek morse code for I came, I saw, you weren’t there.

It wasn’t important to know who left the flower. It was only important to know someone had dropped in for a kafedaki. People did that in those days. Now they text or phone; and this rather sinister love token, as I saw it, has gone the way of the dodo.

So straight away George announces his intentions. He is looking back to his ‘Thommo years’, as he calls his upbringing in Melbourne’s north-west suburbs. But not in a sappy, sentimental way. This is sober, knowing reflection on a working-class Greek-Australian upbringing, its joys, aches and pains.

The image, like the poems, evokes complex subterranean emotions. George isn’t slinging off in a knowing, ironic sort of way. That’s easy to do. Harder still to infuse those times with affection and see them for what they truly were. Much as he chaffed at the bit to get away from Thomastown, George knows this is where he was formed—as a poet and as a human being. He owes a debt to the endless stretch of bland, bleached suburbs. It’s the wellspring of his poetry. Without it he wouldn’t exist. Or he would be someone else, not the George we know.

It’s worth noting that a fly-screen door doesn’t just keep out flies. Locked, it keeps out people as well. You can look but you can’t enter. A locked door says I am barred against you and you can come in by invitation only, like a vampire.

The next best thing to do is draw close and peer through the grille’s intricate, even Byzantine, curlicues into the beyond. This is the heart of Stygian matter.

Like a vampire, a poet may stand at the door, looking in, but he can’t enter. It’s best if he occupies a liminal space—all the better to observe, hover and critique. The door offers resistance against his invasive, often unwelcome, scrutiny. On the other side is a mysterious realm, familiar yet alien. Threatening and welcoming. Like the title above the image, a dichotomy.

And so we come to the extraordinary title. Angel Frankenstein.

What a powerful play on two seemingly contradictory words. Angel and Frankenstein. Light and dark. Placed above the door. Come in. Herein lie monsters and beings of light. Invitation and menace.

An angel is, by definition, good. But the devil is not. He is a fallen angel. Which means an angel can be bad, given the right circumstances. Just as a devil can be good, as Lucifer once was. Or the devil can stray as he tests boundaries and quests for knowledge. To paraphrase Monty Python, he is not really bad; he is just a naughty boy. He doesn’t accept the status quo and therefore falls from grace.

Doctor Victor Frankenstein, as opposed to the monster he creates, is a fallen angel. He was a good man until he cruelly abandons his creation and becomes more monstrous than the benighted man-monster he forms from bits and pieces of cadavers. If anything, by the end of this sorry story, the monstrous creation is more human than the creator.  The hell-spawn freak is elevated through forbearance and suffering, while the creator follows a downward spiral through hubris and vanity. Oppositional journeys beginning from the same core. Elevation and descent, cut through with the limbo of a middle-ground.

The point is, nothing is cut and dried. Nothing is as simple as it seems. Life is varied, complex, contradictory and filled with ambiguities and unexpected byways. It takes a questioning and questing mind to see that. As we see with the poems, George has these qualities in spades.

You wouldn’t think to marry Angel and Frankenstein unless you understand nothing in the world is diametrically opposed. There are only parallels, interconnections and corresponding points.

This new creation—the Angel Frankenstein—is ultimately the electrifying synthesis of disparate parts that form a cohesive whole, a shared communal, even pluralistic, space. That’s why the dedication reads ‘for my tribe’.

*a foreigner or an immigrant, especially one from southern Europe.