The Curator of Schlock #291 by Jeff Shuster

After midnight, Warren gonna let it all hang down.

Week 3 of Charles Bronson Month is here. This week will be a return to form with his salt and pepper hair and boss mustache, none of that black mop nonsense we bore witness to last week. Who did he think he was? One of the Beatles? Unbelievable. Charles Bronson is supposed be the dad we never had, if the dad we never had was a man that killed other men indiscriminately.

1983’s 10 to Midnight from director J. Lee Thompson is a depressing little film about a man named Warren Stacy (Gene Davis). We don’t like Warren in a similar fashion to how we don’t like Bad Ronald from Bad Ronald. Warren is a creepy dude who repairs electric typewriters for a living. He’s not too good with the ladies. They see him as a loser weirdo. No, he’s not almost forty seeking out sixteen-year-old girls. But Warren does decide to murder one of the office women who rejected him.

Yeah, this isn’t going to be a fun movie. Watching young women scream in terror as a naked psychopath stabs them to death is not my idea of a good time. Yes, Warren stabs his victims while naked so as not to get blood on his clothes. That’s rather clever, the sort of thing I can see a serial killer doing in real life. Maybe that’s why I find Warren so disgusting. He’s like a real life serial killer as opposed to a Hollywood serial killer.

Enter Detective Leo Kessler (Charles Bronson), a tough as nails Los Angeles cop who’s seen it all, seen how the justice system lets the scum of the earth back on the streets to terrorize the rest of the citizenry. He’s joined by Detective Paul McAnn (Andrew Stevens), a wet-behind-the-ears kid who still thinks law is here to protect us. Paul still idolizes Leo for all the commendations he’s earned over the years.

Warren’s first victim, Betty (June Gilbert) was a childhood friend of Leo’s daughter, Laurie Kessler (Lisa Eilbacher). While at the victim’s funeral, Betty’s parents tell Leo that their daughter kept a diary of the men she dated and the creepers who stalked her. Also at the funeral is Warren Stacy, who overhears this tidbit. Warren goes to Betty’s apartment, tries to pry open her locked dresser drawer to get at the diary, stabs Betty’s roommate to death when she comes home, and continues to pry at the drawer until it opens. Warren finds a box with word Diary inscribed on it, but there’s no diary inside. 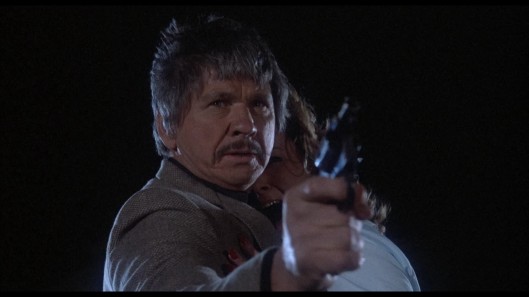 When Warren gets back to his apartment, Detective Leo and Paul are waiting for him, Betty’s diary in Leo’s hand. Leo asks Warren about how he knew Betty, and why she wrote about how much of a creeper he is in her diary. Leo uses Warren’s bathroom and discovers a plethora of nudie magazines and sex toys. They’re about to question Warren further, but the detectives get a phone call informing them about Betty’s murdered roommate.

Leo is convinced Warren is the culprit. Meanwhile, Warren is developing an obsession with Laurie Kessler. He keeps calling her, saying obscene things to her over the phone. I don’t know. At some point, Warren gets arrested for something and lawyers up with a dirtbag lawyer. Leo plants some of Betty’s blood on Warren’s clothes hoping to put him away once and for all, but Paul doesn’t want to give false testimony during Warren’s trial. Leo admits he fabricated evidence, gets fired, and Warren goes free. Boo!

Well, you know how it goes. Warren is going to kill more women. Charles Bronson will put a slug in his forehead. That should make me happy, but the whole experience left me feeling empty inside.