With his Hamlet, Michael Almereyda demonstrated some interesting interpretive choices marred by casting a mawkish, mumbling Ethan Hawke as Hamlet, and Ethan Hawke Ethan Hawked the shit out of that shitty film.

With his Cymbeline, Michael Almereyda demonstrated some astoundingly feeble tawdry interpretive choices marred even further by casting a mawkish, mumbling Ethan Hawke as the scheming Iachimo, and Ethan Hawke, yes, Ethan Hawked the shit out of this even shittier film.

Cymbeline happens to be among Shakespeare’s oddest plays. It is a comedy straining pretty deeply into tragedy, and involves fairy tale elements, like a magical evil stepmother, and Greek gods, too.

Cymbeline, the king of ancient Britain, is angered when he finds that his daughter, Imogen, has married some poor fool named Posthumous, and so bans Posthumous, who retreats to Rome. The Queen, meanwhile, is trying to secure her bloodline by getting Imogen, who is her stepdaughter, to marry her biological son with the tragic name of Cloten. The Queen is evil, incidentally. (Shakespeare didn’t draw her out as well as Iago or Richard III, that’s for sure.)

The love plot involves a wager made between the exiled Posthumous and a conniving misogynist named Iachimo, who promises to bring back to Rome proof of Imogen’s infidelity.

Between the strangely developed love plot and the convoluted political plots, a deus ex machina, in this case the god Jupiter, must straighten things out enough for the play to come to a finish. While many of Shakespeare’s stories merely requires competent acting for a thoroughly good experience, Cymbeline requires finesse and insight. 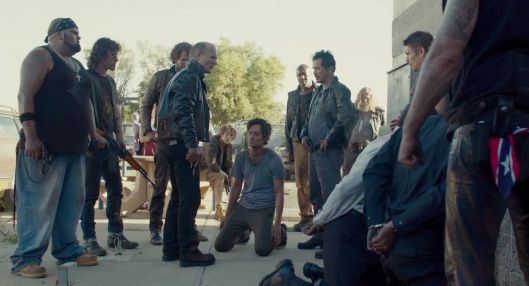 This Cymbeline is so bad that it almost makes Almereyda’s Hamlet look good.

Ed Harris was cast as Cymbeline, and in that part, this fine actor is out to lunch. He utters his lines as if pained, as if the words fit tighter into his mouth than his lame leather jacket clung to his aging torso. Milla Jovovich plays the Queen, and her performance teeters between fair and actually good, except that her costuming is silly, as is the conceit of the whole movie.

The kingdom of Britain is re-imagined as a motorcycle gang dealing meth because that Breaking Bad show was pretty good, right? Let’s just go with that. 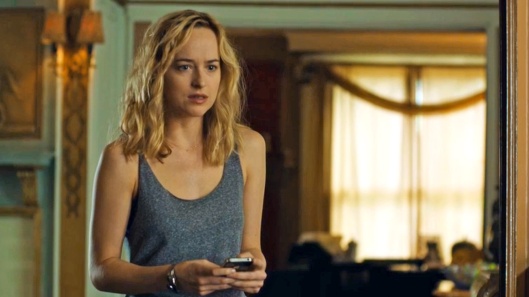 In her pre-Fifty Shades of Gray glory, Dakota Johnson plays Imogen, and gives off the impression of being a rather clean mop that has forgotten where it has left its keys.

Michael Almereyda seems to have fallen in love with shoegazing in the early 1990s, and thought, one could film Shakespeare in that spirit, no?

Had the camera never left Milla Jovovich’s shoes, the film would have been much, much better.

Don’t watch this movie unless you lost a bet. That’s what the rogue says.

Note: At least one line of this review originated from my first discussion of this film in Shakespearing 35.1.