What if the Villains Won?

Since last week’s post was about a Mark Millar comic (Kick Ass) that I found frustrating, this week I’ll look at one I like—Wanted. The miniseries’ first issue came out in 2003, and, while Mark Millar had been writing comics since the ‘80s, this is the comic that solidified his comic stardom for me. Over the years I’ve noticed that if a writer does great independent work that doesn’t necessarily mean that writer will do great work on a corporate property (X-Men, Batman, etc.), and vice versa. I had read Millar’s run on Ultimate X-Men, The Ultimates, and Superman Adventures, and I enjoyed his work, but Wanted really took me by surprise (and in a good way, unlike the film adaptation). 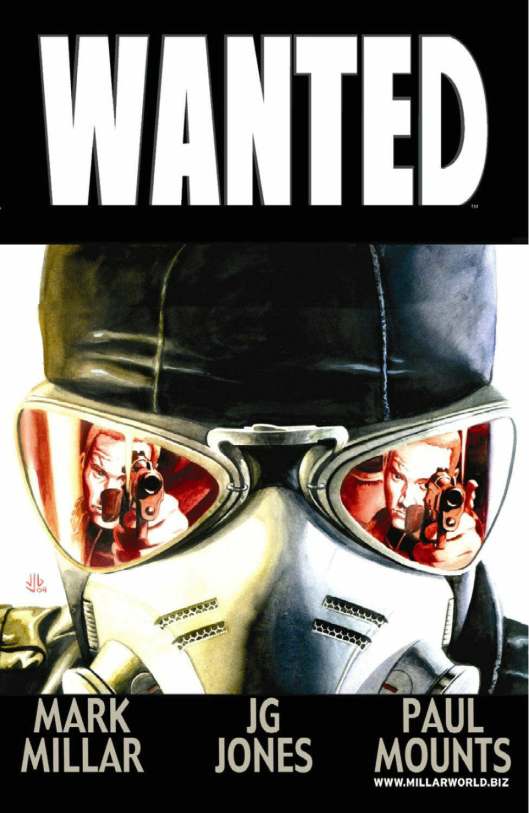 The comic tells the story of Wesley Gibson, a loser with no drive in life. One day, he’s visited by The Fox, an assassin who reveals herself to be a member of The Fraternity, a secret organization of supervillains who rule the world. Wesley’s father, The Killer, the greatest assassin in the world, has been murdered and Wesley is called to take his place. After being trained and inducted into the secrete society, Wesley learns that living in a cubicle isn’t the way to live. The basic story isn’t anything new. And if that’s all there was I wouldn’t be writing this blog post. Millar really runs with the concept of a world run by supervillains secretly and there are many twists throughout the six issues. I’m not going to be delving too much into the later half of the series here.

One of the biggest reasons I love this comic is that the characters are clear reconstructions of DC Comics characters. One thing that can grow tiresome in comics is when one comic book rips off another’s characters. There are so many versions of the same characters floating around out there. But what Millar did well is make versions of DC characters that are capable of standing alone, for one, and he puts them through the ringer in a way DC would never do. It’s not a rehash of a DC tale. Millar uses the characters to tell a story they would never be featured in. For example, The Killer is Deadshot, The Fox is Catwoman, Mr. Rictus is the Joker, Fuckwit is Bizarro Superman, Shitface is Clayface, and Professor Solomon Seltzer is Lex Luthor. 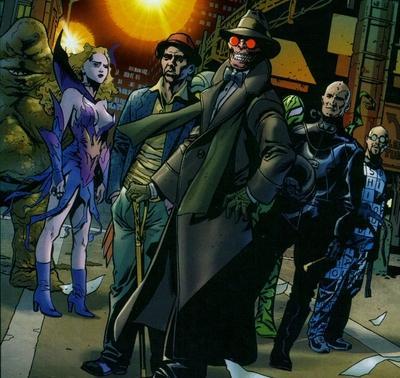 Millar got the idea when he was a child and asked his brother, Bobby, what happened to Superman. He thought Superman was real. His brother told him that Superman disappeared, along with the other superheroes, in a great war with all of the supervillains.

In Wanted, years before the series begins, the supervillains had decided to combine forces, and in a great war, succeeded in killing most of the superheroes. My favorite part of the comic is when it shows what happened to the heroes that the supervillains couldn’t kill. Superman. Batman. Wonder Woman. Using all the science mumbo jumbo comics have to offer, the supervillains bent and folded reality into itself, until the superheroes (and the general public forgot about them. Well, not quite forget. In the Wanted universe, Christopher Reeve is Superman. Adam West and Burt Ward are Batman and Robin. In every other story where a superhero is made to forget that he or she is a superhero, there’s always that little nugget in the back of their head telling them the truth. By turning the superheroes into actors who portrayed the superheroes, that curiosity is squashed. The curiosity that would normally send these heroes on a path to become who they were is satisfied. In the saddest panel ever, Christopher Reeve sits in his wheelchair staring at the sunset. 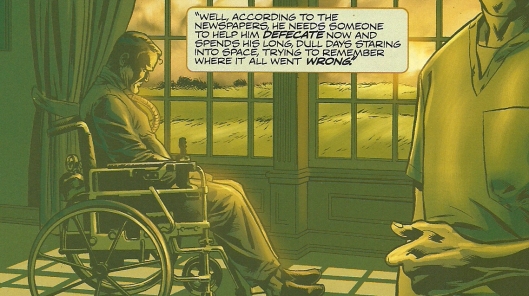 One fear I had when I read the first issue was that the superheroes would eventually come back, that at some point Wesley would reject this new life and the heroes would remain triumphant in the end with Wesley leading the charge. Thankfully that never happens. Millar sticks by his idea here (unlike in Kick Ass, see last week’s post). The superheroes are mentioned briefly, but other than Mr. Rictus (the Joker) killing Adam West and Burt Ward, they aren’t mentioned again and play no importance in the remaining portion of the story. This is a story of supervillains.

By keeping superheroes out of it, Millar is able to study the difference in supervillains. There are supervillains like Lex Luthor and Ra’s Al Ghul who are villains because they want power, money, knowledge, or all of the above. Professor Solomon Selter (Lex Luthor) seems to enjoy staying the background, letting the world go on, while keeping trophies like Superman’s cape. While other villains, like Mr. Rictus (the Joker) are just psychopaths and want to kill and rape and just cause destruction wherever they go. This isn’t a comic of good versus evil, but bad versus evil. What’s the difference between a bad person and an evil one? Even if they are both murderers? Is there a difference?