The Curator of Schlock #25 by Jeffrey Shuster

The Exterminator: He takes out the trash so you don’t have to. 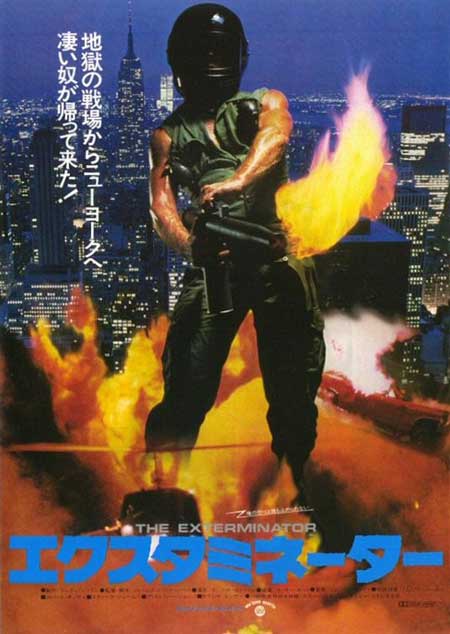 1980’s The Exterminator from director James Glickenhouse is tour-de-force of violence, mayhem, and madness. The movie starts out during the Vietnam War where a bunch of American soldiers are being held captive by the Viet Cong. One of these American soldiers is John Eastland (Robert Ginty, of Warrior of the Lost World fame) and he watches in horror as one of his compatriots is nearly decapitated by one of the Viet Cong. I say nearly because his head just kind of dangles to side like a hangnail. Just as it seems John is going to suffer the same fate, John’s buddy Michael Jefferson shows up save the day. The Viet Cong get riddled with bullets and John and Michael go back home to New York City to work in a grocery warehouse.

Of course, the day comes when some local punks decide to start stealing cases of beer from this grocery warehouse. John discovers their nefarious plot and they hold him at knifepoint. Don’t worry. It’s not long before Michael bails John out again using some good old-fashioned street fighting to lay those punks flat on their backs. Unfortunately, Michael’s victory is short lived.

Those same punks corner him the next day and beat him until he ends up in the hospital paralyzed and breathing through a respirator.

John decides to go find the punks who did this to his friend. He locates them in a tenement building where they’re busy listening to “Disco Inferno” by The Trammps. You know, any punk gang that listens to “Disco Inferno” can’t be all that bad.

Still, I guess John would disagree with me since he shoots a bunch of them and throws their bodies in the basement for the rats to feast on.

John doesn’t stop there. He goes after a mob boss who’s been withholding money from paychecks and grinds him up in a meat grinder. He murders a pimp who specialized in providing young boys to powerful clients, one of whom is a U.S. Senator. The senator also has a yen burning young women with a soldering iron. John sets the pimp on fire and sends a bullet through the senator.

Throughout the movie, there’s a police detective by the name of James Dalton (Christopher George) who’s always on the trail of the mystery vigilante the news media has dubbed “The Exterminator.” And there you have it. Will detective Dalton crack the case? You’ll have to watch the movie! In leau of a trailer, here’s a video of “Disco Inferno.”

Six Things I Learned from The Exterminator