The fourth issue of The League of Extraordinary Gentlemen is the most action-packed one yet. The league attempts to retrieve the cavorite from “The Doctor” and stop the devious foreigner from building his airships. We finally see Mr. Hyde cut loose and rampage his way from room to room creating a distraction so Quartermain and Mina can get their hands on the cavorite. Of course, the team succeeds, escapes unscathed, and hands over the cavorite to Campion Bond. Job well done. Britain has been saved.

But wait, this is the fourth issue of a six issue miniseries. It’s not over. It’s just beginning. With all the violence and death and dismemberment in this issue, many readers might think the gruesome deaths of the countless evil henchmen take center stage. But there’s a lot of suspicious behavior to be found. There are a lot of secrets.

The issue opens with Captain Nemo talking with two of his own men (Ishmael and Broad Arrow Jack). Nemo doesn’t trust Campion Bond. “Bond believes we are his pawns. He thinks no-one observes his game. But I am no-one. I observe everything and to play with Nemo is to play games with destruction.” He refers to himself in the third-person so you know he’s serious. Captain Nemo sits out most of the action, putting together his plan.

Another trick of a character is Mr. Hyde pretending not to see the Invisible Man. We get a couple of panels from Mr. Hyde’s point of view, and we see that he can make out the heat signature of the Invisible Man. Mr. Hyde is like Predator from Predator. But he pretends that he can’t see him. When the Invisible Man points in the right direction to go, Mr. Hyde says, “You keep forgetting, Griffin. I can’t see you.” The reason behind this lie doesn’t come out in this issue. But it does change the way the reader views Mr. Hyde. He isn’t a mindless hulk. He might not look like a person, but he’s not quite an animal either. Dr. Jekyll’s more dangerous than a beast. When the Invisible Man tells him they have to rescue Mina and Quartermain, Mr. Hyde still holds a grudge from when they captured him. “Murray and Quartermain. Huhughh. Yes, I remember them from Paris. They shot me, poisoned me and abducted me. I don’t think there’s any great hurry, is there?” I don’t know why Mr. Hyde lies to the Invisible Man, but I can make an educated guess that it’s not for something good. The Invisible Man better watch out. 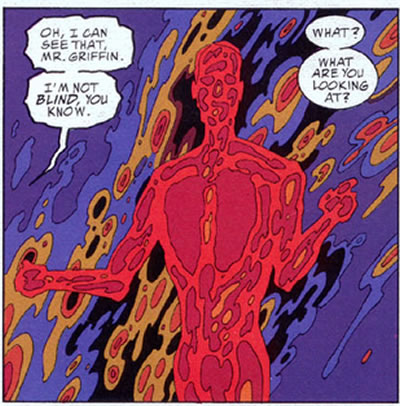 The last segment of the issue reveals the largest and most dangerous of the hidden truths. Last time, I wrote about how based on Alan Moore’s previous work, we were going to get to a point when the league turns against the government. This issue features the beginning of that turn. Campion Bond leaves with the cavorite, but then we find out the Invisible Man is nowhere to be found. He’s following Campion, seemingly under the orders of Captain Nemo. I really enjoyed that the only reason we now see where Campion goes off to is because one of the members of the league follows him. Many writers might have just chosen to reveal to the reader the identity of Campion’s boss. But that always comes off as bullshit. If the reader is following a character or set of characters, then we should know what they know. There may be exceptions to that rule, but I think it’s a good one to have. If a point-of-view character knows something, the reader should know it to. We find out the identity of Campion’s boss because one of the characters finds out. We don’t just get the writer revealing it to the reader. It’s a part of the story.

Mina Murray thought Campion’s boss, Mr. M, meant Mycroft Holmes, is the elder brother of Sherlock Holmes. She was close. While Mr. M is not Sherlock’s brother, he is a Sherlock Holmes’s character. Mr. M is Professor James Moriarty, Sherlock Holmes’s arch-nemesis. Apparently, he used the league to fight a rival crime lord and to steal the cavorite for his own insidious schemes. We’ll have to wait until the next issue to see what the league does with this knowledge.