Lex Luthor: The Thin Line Between Good and Evil

In a comic, you know how you can tell who the arch-villain’s going to be? He’s the exact opposite of the hero.

Superman: For All Seasons #3 is from the point of view of Superman’s arch-nemesis, Lex Luthor. He opens with, “This is a love story. Not between a man and a woman. But between a man and a city.” Luthor is the smartest man in the world, and if Superman didn’t exist, he might have done amazing things for the world. “I poured my life into this city. I gave it a personality. A look. A kind of elegance. She was my fair lady. I’ve grown accustomed to her face. And yet…I was betrayed.” Luthor is not a crazy person like the Joker. He’s not above causing the deaths of others, but he has to gain something from it. He wants power. He built Metropolis. He gave his lift to building the city (Of course, not without becoming the unofficial ruler), and now Superman has stolen the attention Luthor feels he deserves. 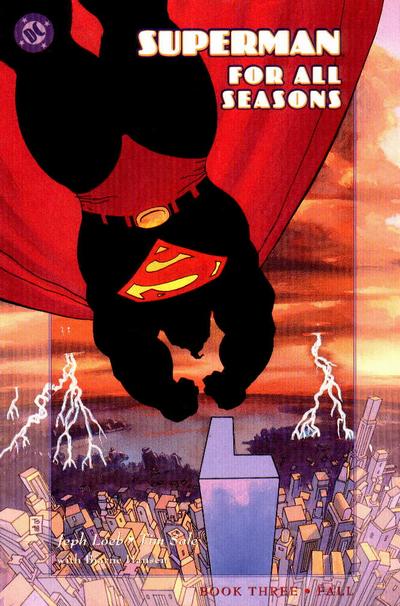 In issue three, Luthor releases a virus into the air, a virus that knocks out the city, except for Superman (and a scientist who had been in a controlled atmosphere when the virus was released). But, he doesn’t kill the city. He could. If he made the virus deadly, Lois Lane and the rest of the city would be dead. Superman would have had to watch them die. But, Luthor just knocks everyone out, and he even creates a hero, a woman Superman saved in the last issue, who is a biochemist and has the antidote. Luthor gives the woman to Superman, who flies her around the city to release her antidote. Lois wakes up. The city is saved.

Luthor could have killed everyone. He could have built a giant robot or created a monster to fight Superman. Defeating Superman in a physical match is not enough. Killing everyone wouldn’t get Luthor what he wants. Luthor doesn’t care much about actually defeating Superman as much as he wants to prove that he is just as powerful as Superman, if not more so. Luthor wants to be thought of as great. When Superman comes along, Luthor needs to show that he and Superman are the same. 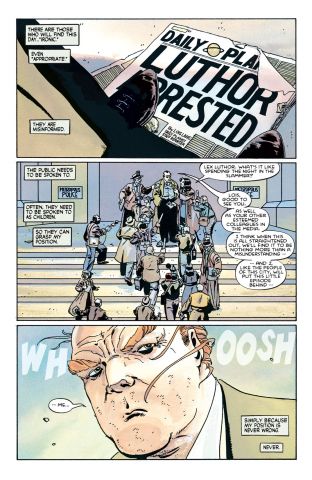 Superman goes to Luthor to find a way to stop the virus, not to attack Luthor. He knows that if he strikes at Luthor, his hope for finding a cure will be lost. Luthor lords that fact over him and takes the time to accuse Superman of being the cause of the virus due to his alien origin, even though Luthor knows Superman had nothing to do with it. He just wants to make Superman alone. He wants Superman to need his help. And, after Luthor so kindly gives Superman a hero that will administer the cure, the hero dies. He wants Superman to watch someone die, to watch someone and not be able to help, as a way to put Superman in his place.

As Superman kneels over the dead hero, Luthor approaches. He holds an umbrella keeping him dry while Superman soaks. “They say you can change the course of mighty rivers. But, you have so little understanding of how fragile the human condition is. How easily a life, all life, can be lost. Being the most powerful man in the world means nothing if you are all alone.” Luthor has a point. What can Superman understand about mankind? He can do whatever he wants. He’s invincible. And, of course, Luthor just has to get one more line in there to make him seem more powerful. “No one knows that better than I.” Once again, Luthor is trying to bring himself to Superman’s level.

But, even though Luthor has a point about Superman being too powerful to understand mankind, he doesn’t know that Superman grew up in Smallville. This series is about the effect Smallville, Kansas has had on Superman. Luthor’s final words to Superman are “Go back to wherever you came from before you fail us all…” and Superman returns to Smallville at the end. Ma and Pa Kent wonder what brought him home, and he says, “I think I need to stay here. In Smallville. For a while…” Smallville is why Superman does understand mankind. The town grounds Superman, gives him humanity. Superman isn’t a god. Yes, he’s more powerful than a human being, in the physical sense, but he has his limits. He can’t help everyone, but he’ll do whatever he can.