Note: Once more I am commandeering David Foley’s blog in which he offers his impressions while reading Shakespeare’s plays chronologically. This interruption happens to be a review of a current production of one of Shakespeare’s comedic masterpieces. 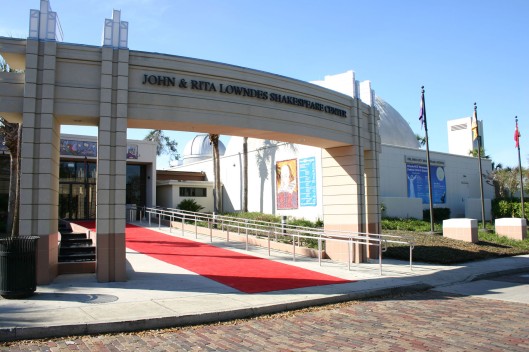 Orlando Shakespeare Theater is among the best companies interpreting Shakespeare in America, and their current production of the seldom-seen comedy, The Merry Wives of Windsor, is entirely worthy of this reputation.

It is one of the gross oddities of American culture that Shakespeare, one of the world’s best entertainers, is a phenomenon most experienced by captive readers burdened by the texts in an academic setting. Being more teachable than comedies, Shakespeare’s tragedies are often flogged upon the poor consciousness of wary high school and college students.

The Wachowski Brothers don’t hope we’ll sit down with the screenplays for The Matrix. George Lucas does not hope that the script for Star Wars, Episode IV will be the point of entry in his work for future generations. Peter Jackson does not hope we will open Tolkien. But I digress. 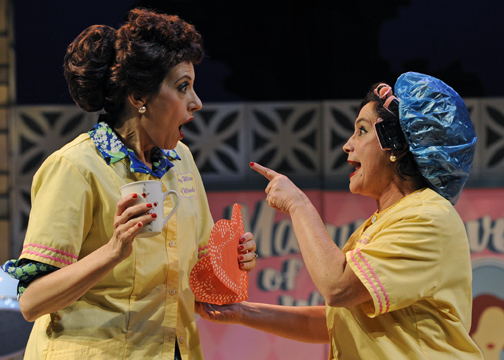 At the center of the play is Sir John Falstaff, a boastful, lecherous, larcenous, corpulent raconteur who at some point took the liberty of dubbing himself as a knight.

He is like nearly all the vice characters fro a medieval morality play rolled into one, and yet too full of personality, too amoral and intelligent, to serve as a dull allegory. Sir John was a minor character in two of Shakespeare’s history plays, Henry IV parts 1, but undercuts the epic sweep of the drama with his egotistical hijinks and callous wisdom about the grim realities of politics and war.

Legend has it that after the Henry Fourths, Queen Elizabeth—perhaps threatened by this clown—demanded Shakespeare compose a play showing Falstaff in love. In traditional theater, comedies end in marriage, and a wedded Falstaff would be dull and fangless, one supposes. And Merry Wives ends in marriage—but not for Falstaff.

Falstaff spends most of Merry Wives wooing two women married to wealthy husbands, so that he can gigolo his way out of his considerable debts.

Elizabeth is not likely to have been pleased, but her loss is our gain.

Orlando Shakes as often as not tries to stay relatively traditional in setting Shakespeare’s plays, and when they stray from tradition, they are bold and purposeful. Director Brian Vaughn has delightfully set this Merry Wives in the hypocritical and infantilizing context of a 1950s sitcom. The bizarrely cheery incidental orchestral music one associates with 1950s television (or Ren and Stimpy’s satires of the same) helps set the mood. Scenic director Bert Scott and costume designer Holly Payne, also makes us see what those black-and-white television shows could not: midcentury fashion and décor was delightfully colorful and stylized. 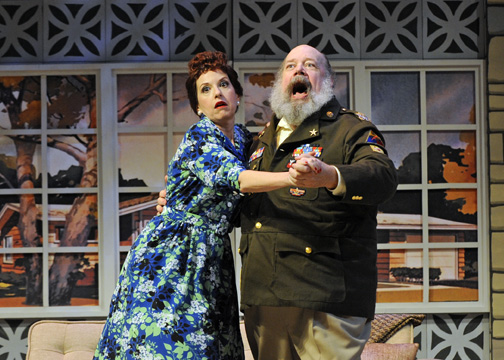 The Broadway veteran, John Ahlin, however, needs to be singled out for his Falstaff. 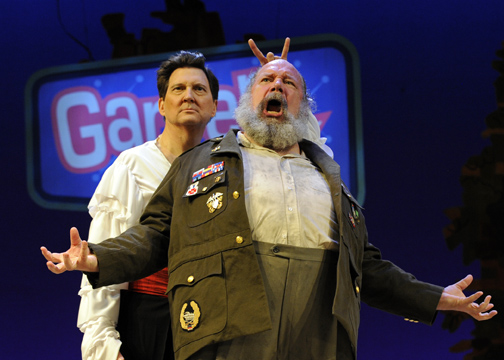 When I interviewed Mr. Ahlin back on Episode 65, I did dearly hope I would someday see him perform as Sir John, and John did not disappoint. His stature and grace are impressive enough to imbue the fat knight with a compelling amount of pomp and pride, which made the slapstick turns and occasional grotesqueries of the plot seem all that more wonderful.

2 thoughts on “Shakespearing #17.2: Another Interlude, This Time Out of Sequence”