The fourth and final issue of Nemesis features a great deal of violence as the police chief eventually overcomes and kills Nemesis. The villain dies with three pages remaining for the comic. These pages fast-forward years after the Nemesis encounter and acts as an epilogue. Like I have mentioned in previous posts, there is not much to Nemesis in terms of story. The comic is filled with beautiful artwork displaying action scene on top of action scene. But, there are no real twist and turns. It is all pretty straightforward. Nemesis wants to kill the Chief. He proceeds with an elaborate plan. In the end, the Chief kills him on the White House Lawn. With the comic being direct, there is not much impact with the ending. The good guy wins. The bad guy dies. In those final few pages, however, the comic offers up, or at least attempts to offer, a greater mystery, something to stay with the reader after the comic is done.

Epilogues are a tricky thing. At what point does the ending begin to pander to the audience? At what point is the sequel set up, instead of the first story closing? The best epilogues, to me at least, close out a mystery found in the comic. Or if it is not a mystery, at least it calls back to the main story.

Since this is a blog on superhero comics, I will stick to giving examples of epilogues in superhero comics, but the same ideas work in novels, short stories, film, and other genres and mediums. In Watchmen, the reader is given two epilogues. One featuring Silk Spectre and Nite Owl visiting the original Silk Spectre in a nursing home and one closing out Rorschach’s story. In the first, closure is offered by telling readers what Nite Owl and Silk Spectre will do now that the world has been changed by the events of the conclusion, and it even offers a touching last scene for the original Silk Spectre and her love for the Comedian. In the second, an employee at Pioneer Publishing Inc. finds Rorschach’s journal, which he had been writing in throughout the comic from page one. It solves a mystery that the reader did not even realize was a mystery and shows that Rorschach will have succeeded in his mission after death, or at least it offers the possibility. These epilogues work because they give the comic closure after the big finale. The world continues on and new things are afoot, but the epilogues serve to end the comic.

Mark Millar, the writer of Nemesis, had an incredible impactful epilogue in Wanted. In that comic, Wesley Gibson succeeds, and then the final two pages talk directly to the reader about how the reader is killing himself or herself at jobs he or she hates and basically be a sheep. It works well because it continues the theme from the comic and even brings up the idea that the events in the comic take place in our world. Again, the epilogue succeeds because it offers closure to the ideas presented in the comic, like a conclusion paragraph in a research essay. 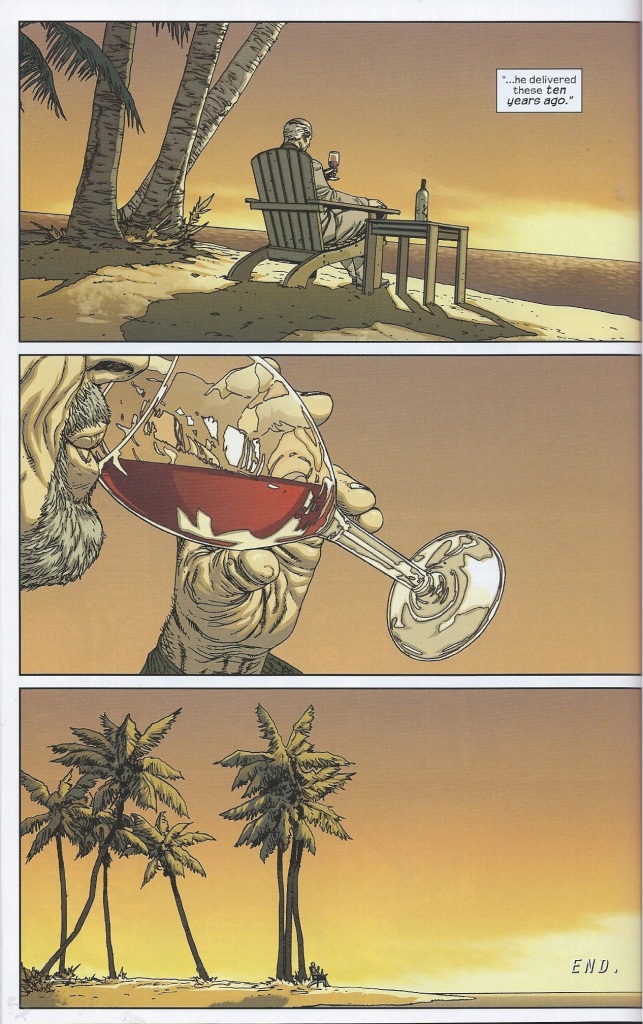 Epilogues seem to have trouble, like the one in Nemesis, when they are geared more toward bringing up new ideas. In Nemesis, the epilogue takes place so many years after the events of the rest of the comic and brings up the idea that there is an organization funding the wealthy who are bored and want to play supervillain. It helps explain how Nemesis has access to so much throughout the story, but that never seemed to be a mystery. It seemed more like a plot hole. The final page shows a man, barely shown except for his beard, sitting on a tropical beach as the sun sets (or rises?). The epilogue tries to give something for the reader to think about, and I love the idea of an organization funding bored rich people who think they are better than the rest so they become supervillains. Honestly, I would not be shocked if something like that does not happen in our world.

The problem is that the comic brings up an interesting idea to go nowhere with it. It sets up a sequel, but because the comic takes time to set up a sequel already, I feel as if I am being sold something. I am not given a story to enjoy and think about—I am given a product to purchase. The epilogue is more concerned with making people money than with art. That is why it fails. If the comic wanted to explore the idea of a supervillain’s funding, then it should have used it more throughout the whole story, even if we were never shown the full extent of the organization. Funding should have been brought up a couple of times by the characters in the story. Perhaps have the Chief try to track down Nemesis by bank account. Something like that. Ideas in storytelling should be explored, not just thrown out into the world.

Epilogues, at least as I think of them at this moment, seem to succeed more the closer in time they take place to the actual events of the story. The epilogues in Watchmen take place soon after (the actual time is left up in the air) the conclusion, as does the epilogue in Wanted. When the epilogue takes place years later, like in Nemesis, it either brings up unnecessary ideas or tries to pander to the audience. I cannot think of one that does it in a comic, but I am thinking of the epilogue for Harry Potter, which takes place many years later to basically give the reader the rest of the characters’ lives or to show them live happily ever after. The writer needs to ask the tough question of whether the reader needs the epilogue or wants the epilogue (or even possibly neither). If the epilogue is needed, go for it. If the story needs another beat, needs a sense of closure, nothing is stopping you. But, if it is an attempt to show the characters all happy to please the reader, or if you feel something in the story is lacking so you need to throw out a curve ball in the end to make the reader think, then maybe you should skip the epilogue, or just revise the main story. I am sure there is an exception to what I have said (when is there not?), but epilogues are tricky (especially multiple epilogues in one story). Remember, as a writer, you came to explore a story, not live out the characters’ lives.