Watchmen: When Not to Show

Watchmen, for the most part, is devoid of action. There are blips on the radar, but the comic is very much a bunch of talking heads.

But the eighth issue is the most action packed. We get Rorschach taking on Big Figure and his henchmen, Night Owl and Silk Spectre breaking Rorschach from prison, and the murder of Hollis Mason, the original Night Owl. The issue is bloody and violent, but upon re-reading it, I was in awe of how little Alan Moore and Dave Gibbons show the violence. Many beginner writers go overboard with action scenes, and they could do worse than studying the eighth issue in finding a way to be violent without showing too much. This goes for every aspect of a story, really. When does a writer cut away? What does a writer show to the reader? 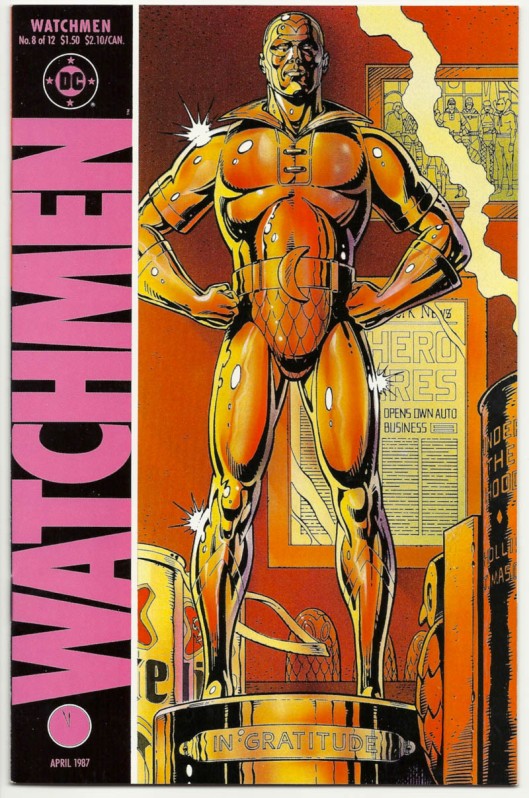 In the first action scene of the issue, Big Figure, a crime boss from the 1960s that Night Owl and Rorschach put in jail, uses the prison riot distracting guards to his benefit and goes to Rorchach’s cell with two henchmen. Rorschach pisses off one of the henchmen, who tries to grab Rorschach through the bars. Rorschach ties his hands so that Big Figure can’t open the cell. Wanting revenge, Big Figure has the second henchman cut the first henchman’s throat so they can get to the lock. In one panel, we see the second henchman with a shiv to the first henchman’s throat. But, we don’t see the throat cut. We get a shot of Rorschach with a stone cold look on his face as blood splashes onto his stomach.

Why change perspective there? Does it have something to do with the reader not being able to handle the grisly scene? Some might say so, but I wouldn’t. If someone didn’t want to read a comic with violence like this, they would not have advanced to the eighth issue. And if they miraculously did and still did not want to see violence, they still get a scene where a person’s throat is cut. They might not see the knife cut through skin, but they know what’s going on. The slitting of the throat is not shown because it does not matter. It’s unimportant. Skip the door and all that.

The henchman is barely a character. Readers are shown Rorschach’s response. He’s one of the main characters of the comic. And his response is that he has none. He doesn’t even acknowledge the man dying. The moment is used to support Rorschach’s characterization, not to give the audience a violent encounter. That’s the difference between violence being used gratuitously and violence serving the story.

Later, violence is used in a similar fashion when Night Owl and Silk Spectre proceed to rescue Rorschach from prison. At first, Rorschach refuses to leave until he settles the score with Big Figure, who has run into a bathroom. Big Figure’s death is not shown. Instead, readers stay with Night Owl and Silk Spectre as they wait in the hall. Again, Big Figure is not important. It might be “cool” to get a death scene, but the story does not require it. The story needs to keep the main characters front and center. So, while the reader can understand what is going on in the bathroom, the reader would not understand what Silk Spectre and Night Owl discuss while waiting. It’s more important for the reader to stay with those two and their conversation than to follow Rorschach. There is nothing surprising about what happens to Big Figure. Skip the door.

Now, the final action scene of the issue—the death of Hollis Mason, the original Night Owl, is a bit different. No main character is present. One could argue that the scene does not affect the main plot of Watchmen, and one would be right in that assumption. Yet, it still is an important scene. It deals with the aftereffects of the main plot. It gives the story weight.

In Watchmen, much of the public dislikes superheroes. A gang blames Doctor Manhattan and the other vigilantes for the troubles of the world, for the world being on the verge of nuclear Armageddon. Hollis Mason released a book years earlier revealing he was Night Owl. The gang, not understanding there is a new Night Owl, go to kill Hollis because they think they are stopping a superhero. They break into his house and beat him to death.

Instead of seeing him die, the scene is cut up. Readers are given one panel of the fight, and then one of Hollis in the past as Night Owl fighting criminals. Due to the break in the scene, the sequence becomes about more than just the death of Hollis Mason. It becomes about consequences.

About the aftermath. Doctor Manhattan, Rorschach, Night Owl, and Silk Spectre can’t save everyone. Their existence, in itself, is capable of bringing pain to others. And what happens years later to these superheroes, when they’re old and forgotten?

Watchmen, at its very heart, is a study about superheroes in the real world. The consequences of their existence. The effect they have on the world. That’s what makes Watchmen so interesting. But, superheroes can’t just affect the world in a good way. That’s not interesting. That’s not real. Bad things will happen, like they do with Hollis Mason. No one can save the entire world.