Walt Disney World can be an absolute phantasmagoria of whimsy and adventure, but it can also be a great vomitus of humid immolation claustrophobically mashed by psychotic tantrums and impaling selfie-sticks and rogue baby strollers pushed by texting zombies whose neurons have been zapped by unending days of sublime, infinitesimal stimuli and infinite queues and unconscionable price gouging on all of the necessities of life, should one have come to the parks unprepared.

Experienced Disneyphiles, such as myself, know how to escape these harsh realities. Avoid spring breaks and summers. Use sunscreen. Drink lots of liquids, like booze.

Brand new amongst the drinking establishments in Walt Disney World is Trader Sam’s, a bona fide tiki bar located on the harbor-end of the Polynesian Resort’s Great Ceremonial House. I brought my brother along, to serve as my drinking proxy (Doctor’s orders).

We arrived around 4:30 on a Wednesday afternoon. The entrance to Trader Sam’s is a nondescript door with a little sign along a stretch of wall covered in volcanic rock. 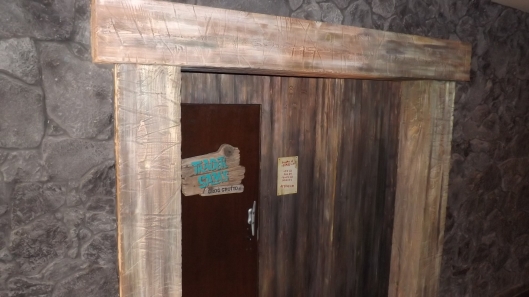 Inside the door, a cheery greeter informed us that the wait would be about half-an-hour. 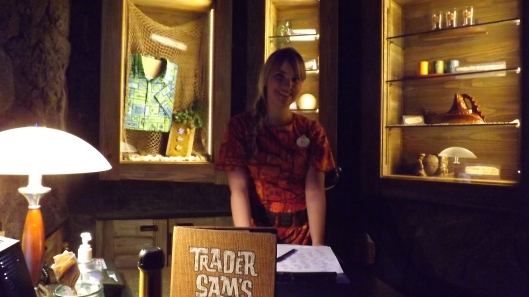 One hesitates to imagine what the delay will be like on a weekend night. We availed ourselves of the fast food location, Captain Cook’s. Despite my reservations about eating at a place named after someone who may have been cannibalized, the aloha pork sandwiches were actually tasty, and took just enough time to eat for us to be allowed admission inside Trader Sam’s Grog Grotto. 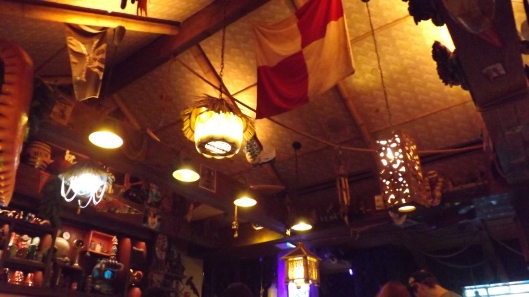 I thought that we would be presented with a table or bar space when admitted into the dark, cool interior, but instead we were encouraged to join another party. The room is relatively snug, and dark enough, but with so many themed accessories, that the eye feels a bit disoriented at first.

There is a long table made out of a surfboard. There were a few smaller tables, a few lounge chairs, and a not particularly long bar.

James and I loitered by the server’s station and ordered a mai tai, or what in this place is called a hippopotomai-tai. When the drink arrived in a googly-eyed tiki mug, my brother took a long drag and said, “They didn’t skimp on the rum.”

After a second sip, he said, “This is the second-best mai tai I’ve ever had.” High praise indeed.

I myself stole a sip, and found the elixir tart and deep, a jolt to the nervous system that I imagine becomes wonderful halfway down the glass.

A few minutes later, five people left the low chairs behind us, and we swooped in to rest ourselves and watch the room and let my brother finish his rum-fueled libation.

From this vantage point, Trader Sam’s is wonderful camp. The room looks like a wing of the hut structure seen in The Tiki Room in Adventureland, and there are even two bamboo windows with views of simulated outdoors scenes, of a volcanic island and moving clouds and undulating water. 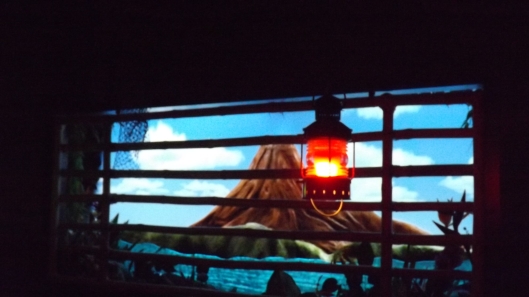 Intermittently, atmospheric disturbances affect the lighting, and interrupt the exotica and surf rock music playing on the loudspeakers. Above and behind the bar are the multifold details one expects of a Disney production, including an octopus’s tentacle curving out of a porthole window, and gripping a raft-beam.

While the space is small, the insistence on populating it sparsely is important, since the details and the fun of the place are allowed to breathe.

From time to time, the cast members working at Trader Sam’s yowl with verbal outbursts meant to enforce the levity and the theme, and mostly I didn’t know what all that noise was about. Maybe on future trips I will find that more welcome.

Before we left the Polynesian, we went outside the Great Ceremonial House to take in Trader Sam’s Tiki Terrace, which featured a lot more tables under umbrellas to protect one from the sun, which burned about a hundred yards overhead.

There is a long wall of volcanic rock perpetually overrun with water. A man was breaking down his music set-up for the ukulele.

His departure disappointed my brother more than I could have anticipated.

The bar and food menu are the same outside and in. I asked a waiter about the Nautilus drink, served in a ceramic mug in the shape of Captain Nemo’s submarine, but we were told that “the fleet is currently out to sea.”

This outdoors location has almost no theming for a tiki bar, which seems odd for its sharing a name with Trader Sam’s, but seems like a relaxed spot when we were there, and might be a lovely waiting room for the interior of Trader Sam’s, if the afternoon or evening is not too sweltering.

Trader Sam’s offers thirteen cocktails, a sipping rum shot sampler, three different nonalcoholic concoctions, and a selection of Hawaiian beers and wines. Eight different appetizers are available on the menu. While the prices aren’t cheap, they don’t seem extravagant if compared to other tiki bars. My brother’s mai tai cost about fifteen dollars with the glass, or around eleven if we didn’t want to take the mug home.

But how could I not take that psychotic mug home?

Like many Disney experiences, Trader Sam’s promises to have impediments to appreciating its wonders, but if you time your visit just right, and plan to enjoy the terrace before the grog grotto, then this tiki bar should be delightful, and is an absolute must-stop for tikiphile completists. 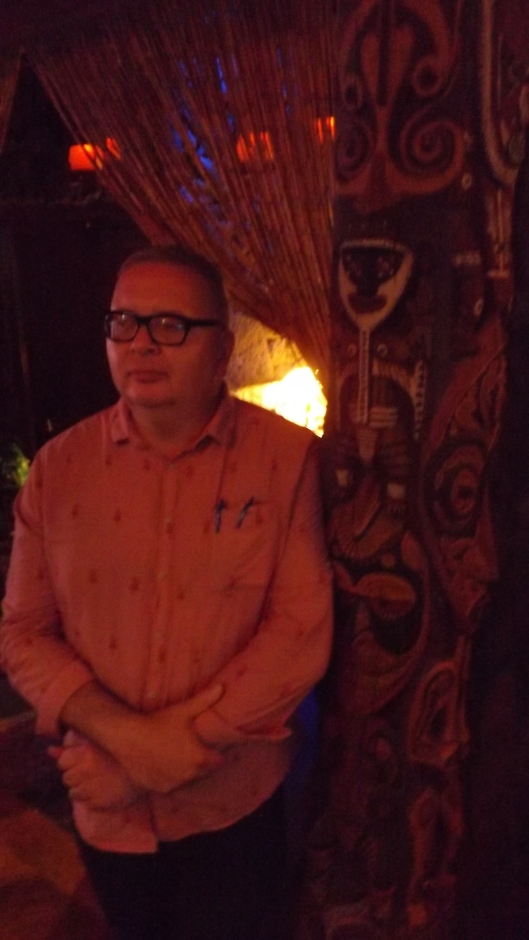