At the end of the first issue of Terror Inc., Terror is tricked and defeated. Issue two opens with the bad guys, a shady government group, placing Terror’s body parts in acid, melting him, and flushing the remnants down the toilet. Due to his curse of not being able to die, Terror soon takes control of a frog, then fights a cat and becomes a cat-frog hybrid. He finally finds a human host in a despicable man who beat his son and is hiding from his ex-wife to avoid paying child support. Before long, Terror is back at it. But, where’s the conflict in following a superhero, or a super-powered being for those who may not find Terror all that heroic, who cannot be killed? Terror can escape, seemingly, any situation. There is bound to be a living creature nearby, and, since he cannot be killed, even if his body is decimated, another creature may eventually come by and he will take control of that creature—even if he has to wait years. This begs the questions of what the conflict is in Terror’s tale and what is at stake for our hero. How do you craft a story without conflict?

Well, for one, anyone who reads a comic, or any story for that matter, about one character should probably expect that character to make it to the climax of the story. So, for Terror Inc., it’s a safe bet that Terror, even if he could be killed, would make it to the final issue. Spider-man is not immortal, but I expect him to live in each story. I would be shocked to see Spider-man die at the end of his next film. Characters do die in comics, but most of them do not stay dead for long. When I see a James Bond film, I do not worry if James Bond will be killed. There seems to be this approach in creative writing, especially in the visual mediums of film and comics, to amp up the conflict and what is at stake in a story—mainly the main character’s life, their lover’s or family member’s life, and the lives of a city or the world as a whole. That makes things exciting, some people say.

I guess. To me, it gets old. But, anyway, that’s another topic for another day.

I, personally, do not care much about high stakes—I need clear stakes. I need to understand what is at stake, even if it’s something small. Of course, I want a reason the protagonist must succeed, but life and death does not have to be brought into it. I like Terror Inc. not because it keeps me on the edge of my seat—it’s entertaining to watch Terror go from obstacle to obstacle. I like seeing the inventive ways he continues on his story. I know he’ll succeed in the end—I don’t care that I know the end. 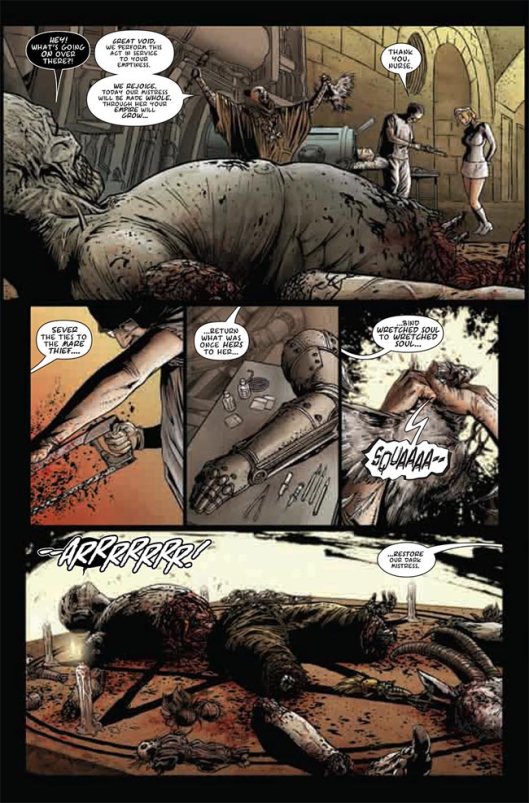 Why do we read? And I don’t mean in some high philosophical way that so many academics like to talk about. What are we reading for? There are multiple answers to this question, I am sure, but I think there are very few that involve trying to figure out the ending. Personally, I dislike works, both in print and in film, that work to only surprise the audience with an ending. M. Night Shymalan’s Unbreakable, to me, is superior to The Sixth Sense, which seems to be his most popular film with the mainstream audience, because Unbreakable, while it has a nice added twist at the end, does not rely on the ending to tell the story. The Sixth Sense is crafted for that surprise ending. Reading, or watching, to figure our the ending of a story does not make much sense to me. I like to take my time with stories, which is one reason I dislike binge watching, like with the new Daredevil TV show on Netflix. Finishing a story is not what I am after. I want an overall narrative arc, but as the years go on and I read and watch more stories, I realize that I prefer strong individual scenes. I want them to add up to something as a whole, but it’s more important to me that the in-the-moment scenes are more important. When I read an essay, I’ll follow it wherever it goes as long as each paragraph is interesting. Deadwood is a great TV show, not because of the overall narrative, but because each scene is magnificent. Terror Inc. is an interesting comic book because each issue is fun and filled with adventure and cool visuals and characters.

When I was an undergraduate (and before), most of my stories had the protagonist in mortal danger, with quite a few having the protagonist die at the end. (How many stories from undergraduates end with the protagonist dying?) To get out of the habit, I wrote a comic about a character who is immortal. In that sixty-issue story, I could not rely on cheap thrills and cliffhangers with the protagonist in mortal danger. It helped me craft different stories. One of the reasons writers put a character’s life in danger is that death is the most horrible consequence of characters failing their mission that the writer can think of. Perhaps writers just need to do some hard thinking. There’s worse things that could happen to a person than death. Not everything needs to be about characters fighting for their lives. There’s a lot more to life than death.