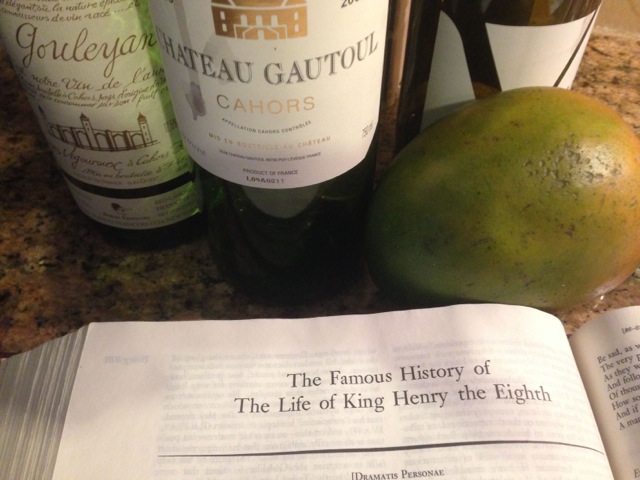 As John King wrote two weeks ago, there’s sadness in The Tempest. The notion that, in Prospero, Shakespeare is throwing down his own books of magic (what John calls “the ending before the ending”) gains force when you’ve followed the trajectory of his work from the beginning. It makes reading the next play he wrote a melancholy experience.

Or co-wrote. Clever stylometrists have pretty definitively assigned what of Henry VIII is Shakespeare and what is John Fletcher. Fletcher, who seems to have been the George S. Kaufman of his day, a skilled and witty collaborator, wrote most of the play, and you can amuse yourself noting differences of style and approach. But the play itself is not hugely interesting, and you might instead start telling yourself stories about Shakespeare’s retreat from the theater.

You might imagine that the King’s Men turned to Fletcher, their new house playwright, with some relief. Fletcher writes a clean, clear line, whereas Shakespeare’s love for compounded meanings and contortionate phrasing (like Henry James, his style got more rarefied as he got older) might at this point have been testing their patience. Here he is describing Henry’s encounter with French king:

(For so they phrase ’em) by their heralds challeng’d

The noble spirits to arms, they did perform

Being now seen possible enough, at last got credit[.]

…which, in trying to compass a mental construct, pushes almost beyond thought’s compass.

You can note the unusually long and detailed stage directions and wonder if Shakespeare was no longer sitting in on rehearsals. Why not? Was he ill? Depressed? Tired of it all? Written out? Then why these last two collaborations with Fletcher. Generosity to a younger playwright? Crush on same? Business necessity?

There are no answers to any of this, of course, and you’re left with the image of a mysterious fading away: his last solo play written in 1611, three collaborations (one lost) in the two years that followed, and then nothing at all for the last three years of his life.

And you can see Jacobean theater moving on without him. Fletcher seems clearly impossible without Shakespeare. Some of Shakespeare’s facility for mental movement, for instance, has rubbed off on him, as in this speech of Wolsey’s:

What sudden anger’s this? How have I reap’d it?

I must read this paper;

I fear, the story of his anger. ’Tis so!

But this limns a mental action without capturing its destabilizing force. A hundred lines earlier, Shakespeare, through Norfolk, links Wolsey’s body and mind:

Is in his brain; he bites his lip, and starts,

Stops on a sudden, looks upon the ground,

Then lays his finger on his temple; straight

Springs out into fast gait, then stops again,

When Henry describes how his doubts arose about his marriage to Katharine, he says they

The bosom of my conscience, enter’d me,

Yea, with a spitting power, and made to tremble

The region of my breast[.]

He was left “hulling in/The wild sea of my conscience.” Do we lose this psychological immediacy (almost literally visceral) when we lose Shakespeare?

And something else: one of the most powerful scenes in the play is Katharine’s plea to Henry and against Wolsey, who she says is “cramm’d with arrogancy, spleen, and pride.” This voice rising up against power is heard throughout Shakespeare. The voice of justice, which is a human voice, is constantly opposed to the more destructive constructs of the human mind. Does it, too, fade out when Shakespeare goes?