Shakespeare’s language is sometimes poopooed by naïve readers as too old. I have, as a professor, been told good-naturedly by sniffing students that he wrote in Old English. In fact, Shakespeare is too new for the Middle English of Chaucer. His language is modern.

His style, on the other hand, is a beautiful monster that is unique, throughout history, to him. Compare him to his contemporaries—they are not difficult to understand. The power of Shakespeare’s language has to do with how deeply he saw into the human condition, and how he created a style capable of expressing it. He did so with bathos, mixing erudition and country speech. He did so by letting speech extend itself in soliloquies, the forerunner of the internal monologues of the Modernist era. He did so with the giddy delight of a genius, using every word at his disposal.

While good actors make the language natural and relatively easy to understand through the context of performance, film directors who approach the bard often feel a certain zap upon their heads. How can they compete with the amazing fire of his words?

One gesture, in visual and musical terms, is pomp, to make the scene a triumph of grandeur … and this can sometimes work, although by now it’s a cliché of Shakespeare films, and tends to be the most unimaginative point-of-entry for fleshing out the plays. Oh, it’s Shakespeare, so polish the brass and gold, wear finery, tell the orchestra to make the listeners’ nipples hard.

In Michael Hoffman’s 1999 adaptation of A Midsummer Night’s Dream, the solution was to relocate the play to Italy, and use opera and Felix Mendelssohn’s music to parallel the grandeur of Shakespearean language. Verdi’s “Brindisi,” the delightful drinking song from La Traviata, appears several times. The musicality of Italian opera smoothens out the potential strangeness of the play’s words.

This movie thrived on what is often one of the pitfalls of Shakespearean casting: Hollywood. Kevin Kline and Michelle Pfeiffer have top billing, and they don’t disappoint. Kevin Kline manages to imbue Nick Bottom, the excitable amateur actor, with humane empathy while still exploiting the part for broad laughter.

Michelle Pfeiffer, siren of current day lyricists, is credibly sexy and regal as the Fairy Queen.

Rupert Everett as the fairy king Oberon and Stanley Tucci as his satyr servant Puck seem really wonderful together, subtly reactive to one another’s performance, but comically out-of-synch. 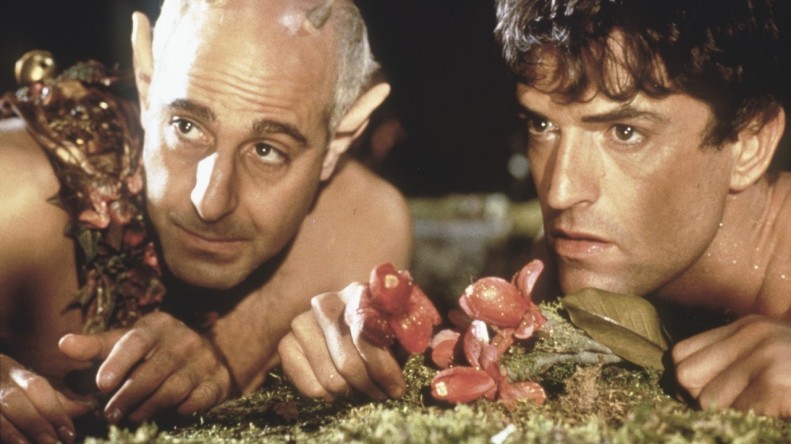 Sam Rockwell as the amateur actor Francis Flute steals a scene late in the play, suggesting the amazing actor he would later become. Calista Flockhart, as the woebegone Helena, turns out to be much funnier than I could have anticipated from those scary ninety seconds when I tried to watch Ally McBeal back in 1998. 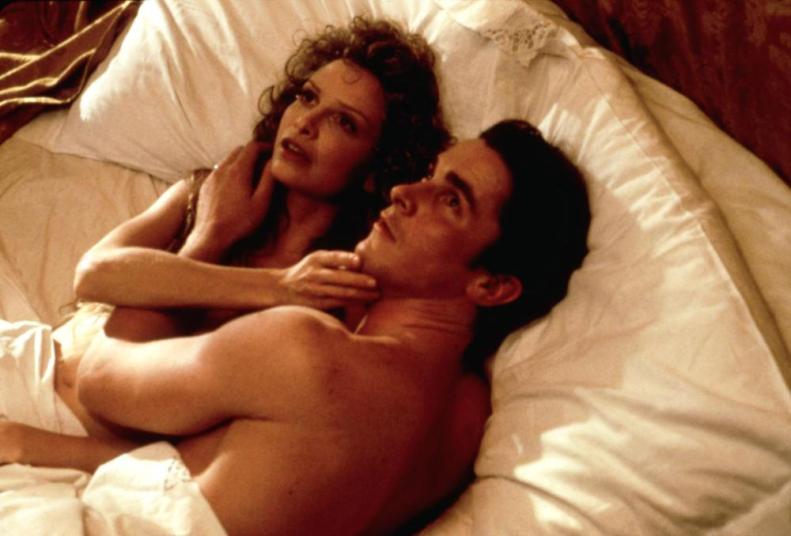 The movie has a deep bench, including numerous actors who would become famous after this movie, like Christian Bale and Dominic West (that guy from The Wire).

David Straitharn, as King Theseus, gives the only wooden performance, as if he could not get past remembering the lines in order to emote anything from them. Sophie Marceau (who was the princess in Braveheart and Elektra Kane is The World is Not Enough) easily outacts him in this movie, even though English is not her first language.

The first Hollywood go at this play (1935) starred Olivia de Havilland, James Cagney, and Mickey Rooney. The thing is beyond unwatchable.

When my doctor says I can drink again, I’ll try to review it.

This 1999 version may be the most fun film of Shakespeare’s work. Dream is, after all, a comedy. It is a love story, but the theme is that love is an inexplicable form of madness.

So, you know, the story is true.