Humor has been a staple of videogames for a long time. Tim Schafer is the most prominent figure when it comes to comedy thanks to his work on Monkey Island, Grim Fandango, and Brutal Legend. His style is a mix of the absurd with self-deprecation, the same kind of writing you find on Adult Swim. For about half a decade Schafer has turned away from mainstream development to focus on smaller projects, inspiring others to attempt their own comedy-driven games. Anthony Burch, known for the show Hey Ash, Whatcha Playin’, took his style of sardonic irony and applied it to Gearbox’s flagship first-person shooter franchise. Getting to the humor, however, is a chore unlike any other in Borderlands: The Pre-Sequel (BPS).

Of all the videogame genres, the first-person shooter is the most simple. Players have their weapon, a range of movements and actions from a point-of-view perspective, and straightforward objectives that are often as simple as kill everything that moves. Some games shake up the formula where the FPS is a format to build upon other elements like role-playing, platforming, horror, or puzzle solving.

BPS is about as ordinary as you can get when it comes to the genre with aspects of role-playing. Being gun-oriented, loot drops consist of randomized weapons with varying stats like attack power, ammo type, and aesthetic appearances. The number of firearms is enormous and each is different from the last as the probability of finding weapons with higher stats and rarity grows with each level of progression. The player also gains experience points to enhance their abilities as well as a perks system called the Badass Rank to touch up melee damage and reload speed.

BPS would be a great role-playing first-person shooter if the actual gameplay it was any sort of fun. I have played many shooters in my day and between Call of Duty, Elder Scrolls, Goldeneye, Quake, and Wolfenstein, I can say with complete certainty BPS has the worst shooting mechanics I have ever experienced.

All of the weapons seem incapable of hitting their target while hitting every molecule around it. When I fire a gun I expect the bullets to hit what I want to kill. If I wanted the rounds to scatter like an Uzi strapped to a paint shaker, I would use a shotgun. Even when aiming down the sights the shots jump all over the place with only a meager few finding purchase. On top of that, there seems to be a constant effect of Kentucky windage where the bullets are so slow that you have to aim ten feet ahead of a moving enemy. It is even worse with the sniper rifle, which is as slow as the assault rifle. You could argue it is due to the game setting’s low gravity, but even with low resistance objects travel at the same speed until something stops them, like a flesh body if I were even capable of actually hitting one thanks to the terrible shooting mechanics.

The frustrating gameplay is compounded by the use of forced level-grinding sequences. Grinding is a big factor as enemies re-spawn after the player completes an area to farm loot and experience on their way to the next. But because there are more than enough enemies from the start, it becomes a monotonous slog you just want to end. Grinding is a choice in most games and when you force players into it, what is supposed to be a useful tactic becomes annoying busy work. It would not be so bad if the enemies were not already difficult to kill because of the shooting mechanics and if the player’ re-spawn animations were not tedious and un-skip-able every time you die.

BPS’s abominable combat is forgivable thanks to the writing. From the beginning its nonchalant style is evident in the dialog and action. The opening credits sequence involves some bandits disregarding each other’s lives as they catapult onto a moving rocket over rock music. During one mission the player loads their self into a cannon to evacuate a space station. On another they must take photos for motivational posters and sell them to an enemy that has self-esteem issues. When the game starts, one of your objectives is to revive a wounded character, and if you wait he will say “I’ll just bleed over here for a while. I hear it’s a super-fun way to pass the time…”

The first quest requires the player to kill a boss character at the behest of another character on the grounds that “He’s kind of a dick.” And when the boss is reluctant to kill you, the main antagonist makes up an insult over the radio that spurs him into a blind rage. In some of the more macabre moments, the game’s many robots remark on how they feel pain in slow motion or characters will throw in a “That’s what she said” joke in the middle of combat when the stakes are at their highest.

There are some serious points to keep the story and tone from stagnating. The game is an origin tale of the character Jack, a swashbuckling adventurer who becomes the villain in Borderlands 2. He starts out likable, but after his seemingly harmful intentions are thwarted and greater powers actively prevent him from moving forward, Jack gradually turns into a sadist. The first time he kills he does not like it, but after the second and third time he finds it more appealing and embarks on a quest for revenge. In another part he forces an AI construct into a robot body as she begs him not to and kills her for resisting. 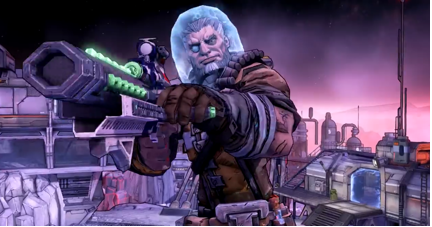 The game’s aesthetics complement the humor. The Borderlands games are best known for their cartoonish, cell-shaded style of bright colors and deformed characters. It takes a science fiction world inspired by the likes of Firefly, Mad Max, and Cowboy Bebop, and bathes it in a neon veneer. Character apparel is between ordinary and eccentric with some wearing weathered space suits and others in modern clothes as simple as jeans and jacket. The weapons are also absurd with assault rifles sporting impractical bayonets or various elements and configurations that would not make sense in the real world. With all its nonsense, however, the aesthetic is remarkably consistent and works well with the game’s overall feel.

Borderlands: The Pre-Sequel is a struggle to play, but a rewarding endeavor. Frustration and annoyance permeate throughout the core of its gameplay before getting to the clever and humorous writing that make it worthwhile. The dialog and characters are enough to overcome the game’s irritating hurtles and worth a look if you are up for the challenge.