Videogames take after movies for story and gameplay. Developer Hideo Kojima understands the need for a separation between the mediums and uses film for storytelling outside of gameplay. David Cage of Quantic Dream, however, has sought to combine them. His three games are styled after the point-and-click genre where players navigate environments to initiate instances of action or conversation. Cage is so confident in his work he refers to them as “movies,” wants them to be judged as such, and he is going to get his wish.

When I started writing online I began as a film critic. With 80+ reviews under my belt I will treat Cage’s games as movies and review each one in a format similar to my critiques.

Depressed and destitute after a car accident, Ethan discovers the Origami Killer has kidnapped his son, and tries to get him back. Meanwhile, private investigator Scott tracks down the parents of the victims to bring closure to their tragedies. On the police side, FBI agent Norman is paired with the local police to assist in the apprehension of the Killer. Caught in the middle, Madison seeks to help Ethan with her true motives unknown. 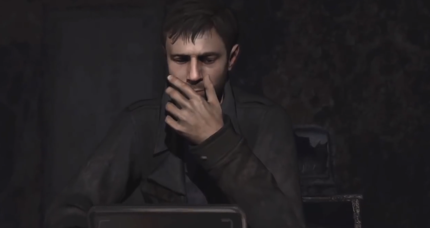 Unlike Indigo Prophecy, Heavy Rain (HR) is not strung together with random elements that do not belong together. It is a combination of noir and crime drama in a believable realm of reality. HR bills itself as a mystery from the perspective of its four characters that play a role identifying the Killer. In that respect it succeeds, but not without significant issues that drastically affect the overall immersion.

Cage is French, and when a foreigner writes a story in a place foreign to him, it usually does not turn out well. Clearly, Cage wanted to tell an emotional story with the theme of fatherhood and used advanced facial capture technology to better convey the emotions of professional actors. But the performances and flawed setting deter any possibility of sympathizing with what is going on. Furthermore, the twist come the end is a bold-faced contrivance that makes no sense and contradicts the entire plot to the point of deception. It comes off as a twist for twist’s sake, hastily shoved in because Cage did not know how to end his magnum opus.

I get the feeling he watched Mystic River, Gone Baby Gone, and The Departed and was inspired to set his story in an eastern seaboard location–specifically, Philadelphia, though it is not directly mentioned. It is obvious Cage has never been there. It comes through mostly in the individual locations. In a grocery live chickens are stocked next to unpackaged meat and fish, there is a carousel in a random park, a car mechanic keeps cars long term in an underground garage with multiple floors, and everyone has a studio apartment. It is as if Cage did not know how some things work in America and replaced them with elements from France. A sense of verisimilitude is important in all fiction, especially when the story takes place in an alien environment, but if you cannot achieve that with a realistic setting, why bother writing at all? 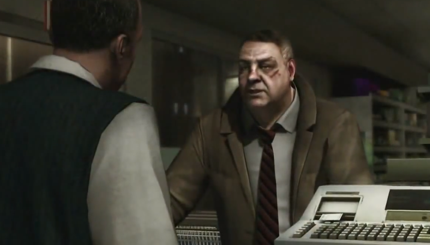 The inconsistencies in setting would not be so bad if the characters were believable. Of the four main actors, two are Americans while the others are Brits who cannot voice-act or put on an accent to save their lives. Ethan is supposed to be the protagonist, but comes off as robotic and petty. He is weak, whiny, and not at all the kind of hero players would like. No, he does not have to be John McClane, but Ethan needed to feel like a proactive and devoted character. Norman and the other cops put on an unintentionally hilarious Boston accent that does not fit with the setting. I do not know if the actor playing Norman was just having fun or Cage told him to do his best impression of Mark Wahlberg.

The other actors do not help the situation, either. I have a feeling Cage employed locals. As a result, two-thirds of the cast is more Francophone than the concept of surrender. Being foreigners, they could not act in a second language, dramatically hindering their performances and taking you right out of the experience. The worst by far were the children and a few female actors. The end goal of the story is to rescue a child, but the kid is so terrible you want him to die. Also, possibly due to the facial capture, the characters’ eyes do not move for most of the time and when they talk, it looks like they have something questionable in their mouths.

The performances are not so much the fault of the actors as it is the person who wrote the script. Unlike Kojima, Cage saw things in movies and tried to emulate them with no understanding of what they mean or how they work in their own context, compounding the inconsistencies in HR.

The Killer has slain seven children in two years and the FBI only now sends a liaison to the local police. In the real world, the Bureau would have taken over after maybe the second or third victim. Even in Twin Peaks Agent Cooper showed up within a matter of days upon discovery of Laura Palmer’s corpse. There are some issues of wording as HR was probably written in French and later translated. Where characters are likely referring to an abandoned lot, they say “wasteland” or awkwardly call someone a “bastard” or “ugly bastard face.” Either the actors did not realize what they were saying or Cage yelled at them whenever they questioned his writing. The cop paired with Norman is Blake, the obvious “bad cop” archetype. He chokes witnesses, habitually hinders the investigation even though he seems to want to solve the case, thinks every suspect is the Killer, and has no concept of how to conduct standard police procedure like interrogations. Blake is so blatant in how bad he is, he makes the Bad Lieutenant look like Serpico. In a scene where Norman chases a suspect, the latter attempts to kill him before Norman gains the upper hand. In questioning, Norman finds out the suspect ran and tried to kill a cop because he was late for a parole meeting. Even in the real world criminals are not that stupid.

Two years before the events of HR Ethan is an architect with a wife and two sons. When his eldest son dies in a car accident, he is left divorced and his last son hates him. However, not only did Ethan throw himself in front of the car to save his son, putting him in coma, the accident scene was ham-handed and not at all fatal. The car was barely going 40 and in the shot of the impact, it stopped right as Ethan leaps out. Cage saw this, tried to edit around it, and failed. Even though Ethan sacrificed his safety to protect his son, his passive-aggressive wife still hates him and made sure he got the short end of the stick come the separation for no reason except bad writing. It does not help that said kid had it coming as he wandered out of a crowded mall, walked across a busy street, and then proceeded to run back after Ethan calls for him, disregarding the oncoming traffic. Clearly nobody taught him to look both ways or he was dropped as a baby.

The worst travesty of HR is how it handles the character of Madison. In no instance is her character not playing nursemaid to Ethan or else put in sexual situations, exploiting herself.

In her first scene she is almost gang raped in an apparent nightmare that never comes into play later. Where Madison is the focus of a scene she is supporting Ethan by mending his wounds and even buying groceries. In her two bigger roles she is strapped to a gurney by a crazy surgeon and does a strip tease for a club owner in exchange for information. This would be the crux of my contempt if the rest of the story did not already have enough to complain about.

To close out this post, I find it necessary to explain the twist because of how bad it is. It is a lesson all fledging writers must learn, but it requires giving away the game’s only spoiler. At this point if you somehow still want to play HR, skip to the final paragraph for the conclusion.

Scott’s whole arc is he is tracking down the parents of the Killer’s victims to bring closure to their grief and build a case. He collects items the parents received after their child was abducted like a shoebox of origami figures, a gun, and a cellphone that apparently they forgot to show the police. One of his biggest leads is the son of a construction tycoon who was caught taking a kid from a park. The police did not investigate because the father paid them off. As Scott goes after the son, there is an attempt on his life where he is put into a car and driven into the river. When he gets out Scott goes to the father’s mansion and after beating him, the father confesses his son was obsessed with the Killer and wanted to emulate him. That is where the arc seems to end before it is revealed Scott was the Origami Killer the whole time.

If that sounds stupid it is because it is. It contradicts the entire character’s purpose and comes off as a complete bold-faced lie that screams lazy and half-thought-out. The biggest give away is the game’s character thought mechanic where the player can listen to what the character is thinking. Every time you listen to Scott’s thoughts, it is never related to being the Killer or what he has done to his victims. I guess he conditioned himself to think a certain way at different times like a sleeper agent from the MKUltra Program. Furthermore, I get he is probably contacting the parents to tie up loose ends, but why now? Why after two years of killing is Scott finally getting around to covering his tracks? For a guy who was a former cop and planned a comically elaborate scheme for his victims, he is not very good at hindsight. Also, why would Scott go after the son of the construction tycoon when his obsession with the Killer could prove a valuable diversion? The revenge angle makes sense, but I would assume avoiding apprehension is more important.

Scott’s whole motivation for being a murderer is pretty weak in the first place. When he was younger, his brother was caught in a sewer pipe of rushing water. He tried to get help from his alcoholic father, but he was too wasted and Scott’s brother died. From there he vowed to search for a better father by kidnapping children and subjecting their fathers to a variety of trials to test their commitment. The thing that makes this more stupid is Scott started killing two years before the events of the game and he is middle aged. You would think by then he moved on 40 years after his brother’s death. Vietnam veterans still struggle with trauma, but how does the death in a family compare to the biggest mistake in American history, that affected an entire generation of young men? This is why Batman does not make any sense as a vigilante.

Heavy Rain is an improvement over Indigo Prophecy. It is far more cohesive and easier to follow, but the inconsistencies in the setting, characters, and the incompetent plot twist was such a contrivance, by the time it is over you feel as though you have been lied to and wasted your time.