The Curator of Schlock #120 by John King

The worst Bond movie ever?

If you love cinema, you love James Bond movies and if you don’t love James Bond movies, you can just stop reading this blog right now! I have zero tolerance for fools that can’t enjoy beautiful women, exotic locales, criminal masterminds, or ass-kicking gentleman spies. But unfortunately not all bond movies are created equal and Diamonds Are Forever lies at the bottom of the barrel. Nothing will ever be as bad as 1967s Casino Royale, the one with Orson Wells and Peter Sellers. I don’t even know if you can even call that a Bond movie. Awaiting the inevitable defense of 1967s Casino Royale from John King.

The Blue Rat cover is sad.

This might be the worst DVD cover art I’ve ever seen. We have Connery at a craps table like he’s in some come to Vegas brochure. In fact, there are whole scenes in this movie that feel like advertisements for Las Vegas Hotels and Casinos. That’s Plenty O’Toole standing next to Bond. I think she blows on the dice.

Ooh. There’s some bad dialogue coming from this one. “You handle those cubes like a monkey handles coconuts.” I don’t even know what that’s supposed to mean. Is that a simile or a metaphor? Oh wait. Similes are metaphors. 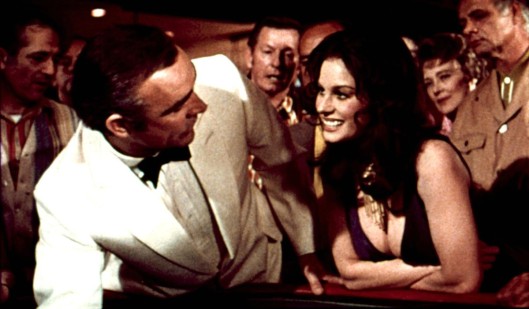 Some Vegas mobsters toss Plenty (Lana Wood) out a hotel window. Later, she’s drowned in a swimming pool. Nobody cares. Tiffany Case (Jill St. John) is the main attraction on this strip.

There’s a scene where James Bonds’ arch-nemesis dresses up like an old lady, make-up and everything. This was the guy that electrocuted one of his minions while gently petting his kitty cat, the guy who ran SPECTRE, the criminal mastermind who was supposed to be so formidable that James Bond didn’t even meet him face to face until the fifth Bond movie. Why is he dressing up like an old lady? Who does he think he is, J. Edgar Hoover?

There are too many Blofelds.

It looks like Ernst Stavro Blofeld (Charles Gray, of The Rocky Horror Picture Show fame) is copying himself by sticking henchman in special mud baths that make their faces into silly putty before being molded to look like him. He then installs a miniature transistor in their necks so they sound just like him. Seems overly complicated. In those Mission Impossible movies all they need is a fancy mask and a little adhesive strip of electronics taped to the neck. Much simpler!

Jimmy Dean is in this movie.

Yeah, the sausage guy is in this movie. He plays Willard White, a character based off of Howard Hughes. Don’t worry he’s not peeing into mason jars or growing long fingernails. Don’t judge. How many of us haven’t done one of those things?

Blofeld has a super satellite

Ernst Stavos Blofeld builds a satellite with a bunch of diamonds that can focus the rays of the sun so he could shoot heat rays at nuclear missiles. Cool! 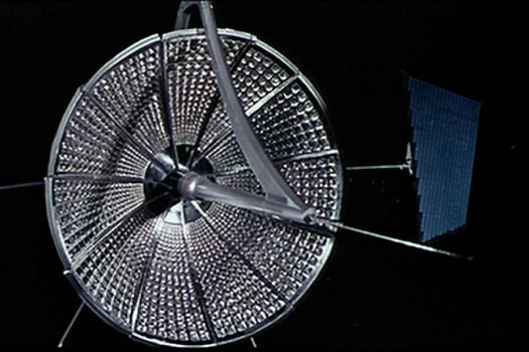 I want a super satellite!

There’s a scene where Connery’s Bond sneaks onto a set of a moon landing being filmed. I knew it was fake!

The astronauts slowly chase after him as if they’re in zero gravity. One of the guys filming screams, “What the hell is this, amateur night?” Bond then steals a moon buggy leading the police on a mad capped chase across the Mojave Desert.

No, I wouldn’t go that far. The sum of its parts doesn’t build up to much of anything, but the parts themselves are entertaining enough. James Bond would return in Live and Let Die starring Roger Moore as James Bond. We’ll cover the Moore Bond movies in the future on this blog. In the meantime, your Curator of Schlock will be on hiatus until March, but like James Bond, I will return

2 thoughts on “The Curator of Schlock #120: Diamonds Are Forever”