Review of Yusef Komunyakaa’s The Emperor of Water Clocks 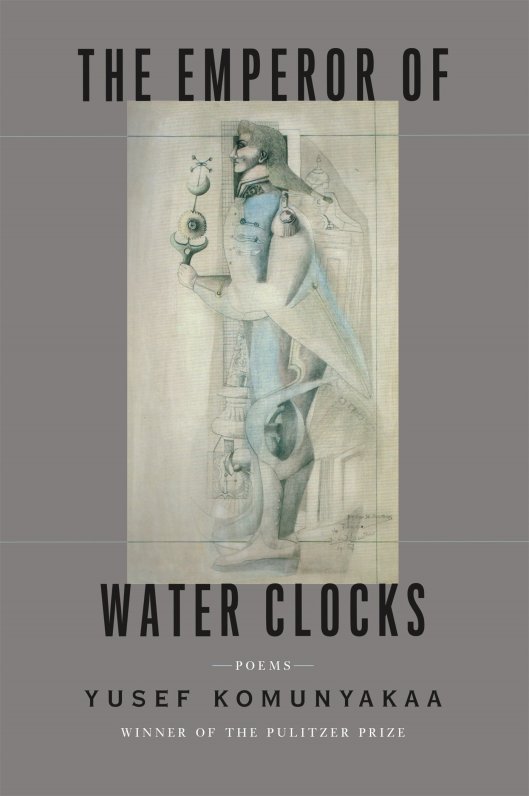 Yusef Komunyakaa’s latest poetry collection, The Emperor of Water Clocks (Farrar, Strauss and Giroux, 2015) is stately. I know, that’s an awful word, but it describes a book that is measured, dignified, elegant, and profound.

The poems have the weight and cadence of myth, a reading reinforced by the arrangement of poems. The book opens with “The Land of Cockaigne,” in which “This old story behind stories / turns an epic season.” The next several poems give us a cast of characters worthy of an epic fantasy–a seer, a jester, an emperor, a raven master, luckless sailors and miners–but the book is not a narrative exactly. It is a meditation on power explained through myth, art, history, and memory–in other words, the stories we tell ourselves as individuals and as a culture.

Throughout the book, Komunyakaa marries the contemporary and the mythological, the personal and the historical in surprising ways. In “Il Duce’s Villa,” Komunyakaa describes tourists who “rent [Mussolini’s] bed for luck” and “Africans / selling knock-off sunglasses” then deftly and lyrically reminds us of the layers of history supporting the present moment:

…a tyranny of frescoes

in my head. Newlyweds tangled

in linen slow as a dream of egrets

Many of the poems take stories from history or myth and superimpose contemporary images and events over them, or vice versa. In “Fortress,” we see the ritual, history, and foreshadowing of power in a boy’s fort in the woods. The poem after “Dear Pandora” is called “Transference and Bling.” If this is a myth, it is an incredibly timely and topical one.

The poems feel mythological, in part, because of how rhythmic they are. They feel contemporary because of how Komunyakaa uses rhythm and image to surprise us. In “Fortress,” for instance, the boy in his fort in the woods is surprising in the midst of “a circle in the red iron clay / around my feet, where no evil spirit dares / to find me.” In “Augury at Sunset,” a family eating together outdoors become “shadows…singing the names of the restless dead.” In the contexts of the poems, the mundane becomes portentous.

I think Komunyakaa means for us to see that we are part of history, sometimes uncomfortably so. Near the end of the book, he writes, “today, love, I’m brave enough to say, / Antiquity, here’s my barbarian shadow.” These poems are, literally, his way of addressing history.

I’ve recently sung the praises of short books, books like those tiny houses where every object serves a purpose and fits into the limited space like a puzzle piece, whose very smallness demands efficiency rarely seen in longer work. At 111 pages, Emperor is not a small collection, but it includes no filler poems, no weak links, no lags in momentum. It is, instead, like the palaces it evokes: grand, elegant, meticulously curated, and built to last a very long time.

Pair with: a Viking’s Blood–half mead, half dry red wine–served in a wood-fired ceramic goblet, if you can find such a rare and beautiful thing.

Amy Watkins (Episodes 124, 161, 164, 192, and 209) grew up in the Central Florida scrub, surrounded by armadillos and palmetto brush and a big, loud, oddly religious family, a situation that’s produced generations of Southern writers. She married her high school sweetheart, had a baby girl and earned her MFA in poetry from Spalding University. She is the author of Milk & Water (Yellow Flag Press, 2014) and the art editor for Animal: A Beast of a Literary Magazine.