The Curator of Schlock #182 by Jeff Shuster

Poliziotteschi is an Italian film genre revolving around crime. This particular film genre is new to me. That’s a good thing. The great thing about movies is that one can always uncover forgotten gems from decades past. Not only can one discover movies one has never heard of, but also entire genres of film. Poliziotteschi is a crime genre usually involving government corruption, mafia intrigue, and vigilantism. My first foray into poliziotteschi is 1975’s Killer Cop also known as La polizia ha le mani legate. The Italian title translates to The Police Have Their Hands Tied. This might explain the poster.

The movie centers on an Italian police officer in the narcotics department by the name of Matteo Rolandi (Claudio Cassinelli). He’s doing some investigating at a hotel, which I assume is drug related. Meanwhile in the hotel lobby, some squirrely punk in a green raincoat tries to remove a red suitcase, getting into a scuffle with the hotel clerk. The squirrely punk loses his Coke bottle glasses in the scuffle and warns the guests that a bomb is about to go off. He high tails it out there. The bomb goes off in the lobby, killing and maiming dozens. Matteo Rolandi witnesses the aftermath of the carnage. 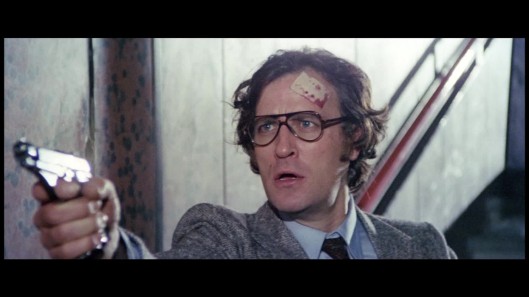 The news media decries that it’s a terrorist attack from the “enemies of democracy.” The head of Home Affairs flies in to investigate. I’m assuming that is Armando Di Federico as played by Arthur Kennedy who is about as Italian as Patrick Stewart is French, but we like Arthur Kennedy here at the Museum of Schlock so we’ll let that slide. We like Patrick Stewart too, but he’s not in this. Patrick Stewart was in Lifeforce, that movie about the space vampires. I think his spews gallons of blood in one scene.

Anyway, Matteo has a friend on the force, an incompetent detective by the name of Luigi Balsamo (Franco Fabrizi). The hire ups stuck him on a pickpocket beat after some kid stuck him up with a toy gun. He laments to Matteo that he isn’t cut out for the streets, that he wants a nice desk job. Luigi happens to be on a tram with a squirrely guy wearing a green raincoat. Luigi follows him, but the squirrely guy pulls a gun on him, threatening to shoot him if he doesn’t back off. Luigi gives a description of the suspect to the Chief of Police.

The rest of the movie has Matteo butting heads with Armando over the investigation. Armando doesn’t want any shenanigans like suspects mysteriously committing suicide or evidence vanishing. Luigi gets assassinated while fondling some oranges at a fruit stand. The squirrely guy in the green raincoat tries to get out of town with his terrorist cohorts, but their getaway vehicle explodes. The squirrely guy escapes only to be thrown out a window by the same assassin that killed Luigi. Matteo and Armando are getting nowhere in their investigation. The bombing may or may not have been orchestrated by government officials. A key keeps getting passed around.

I haven’t been this confused since True Detective Season 2. Matteo kills the assassin, but the conspiracy is never exposed. We get some title cards before the end credits explaining the aftermath of the investigation, written in Italian!