In 1950’s The Liberal Imagination, Lionel Trilling made an extended version of the argument that the liberal arts (including the experience of literature) help extend the imaginative powers of the human condition, which is necessary if society was going to thrive. This theory seems to be supported by scientific studies that suggest that the reading of literature makes people more empathetic. While this finding supports a comforting narrative that literary study is ennobling, there is significant doubt as to whether reading causes empathy to grow, or whether empaths are more likely to find their way to literature so that their reading habits correlates to their emotional outlook.

One of the reasons I resisted Shakespeare for a long time is the presumption that I should have been reading Shakespeare (because doing so would be good for me). Furthermore, the simplistic notion that Shakespeare’s stories are redemptive and that reading Shakespeare makes one good seems to overlook characters such as the bastard in King John, Iago in Othello, Aaron in Titus Andronicus, and half the characters in King Fucking Lear. Smarter is not always an ethical improvement.

I am not suggesting that Shakespeare is culturally or ethically neutral or bad—merely challenging a binary approach to the social worth of the bard.

These are some of the things that came to mind when watching this 93-minute documentary about a prison troupe called Shakespeare Behind Bars as they prepare for a performance of The Tempest. 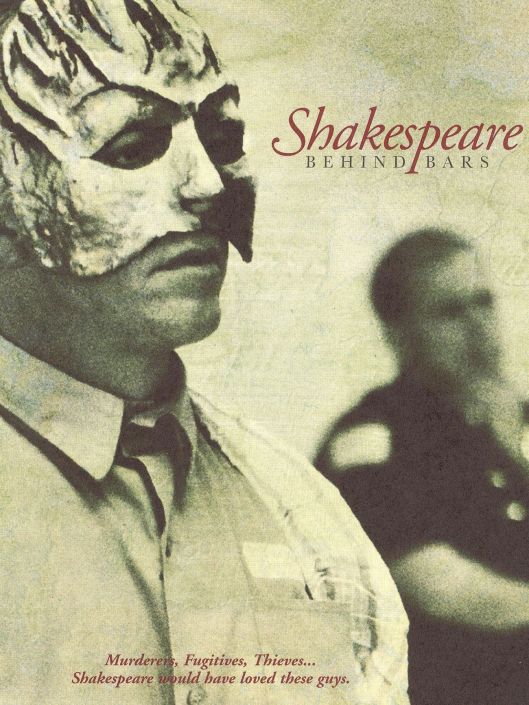 The setting is Luther Luckett Correctional Facility, a medium security prison in Kentucky. The film is produced by the BBC and Sundance, and features Appalachian mood music by James Wesley Semple. Imagine a smart reality television show with the gravitas of Ken Burns’s The Civil War.

What seems to strange in watching this documentary is how gentle it seems. The six prisoners we follow are guilty of heinous crimes, and with one exception they seem lucidly aware of the seriousness of their crimes. The subject of why they are in prison is not shirked.

Curt Tofte, the civilian volunteer director of the SBB ­program, holds these men to a high standard of understanding the psychology of these plays, and understanding how those psychologies have been in play in their own lives (though not in terms of their crimes, which he does not judge since, being in prison, they have already been formally judged). The conversations they have together about their parts, and their personal histories before prison, plus their confessional testimonials in which they discuss their crimes explicitly, reveal that these prisoners are human beings who can articulate their struggles to build a meaningful sense of selves and lives in prison.

For example, there is Sammie, who is shown delivering Henry V’s rousing Agincourt speech. Tofte taunts Sammie’s performance as a pointlessly cerebral exercise until Sammie found the urgency in the speech, after which he could find the emotional meaning of the speech. 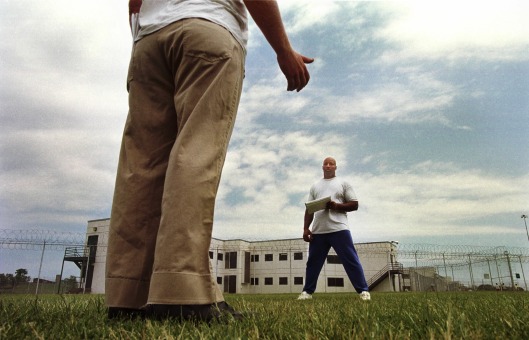 Sammie, running lines in the yard.

Sammie is a large man, and he was bullied by his parents and sexually abused as a child. He killed his emotionally abusive girlfriend one night after she triggered him. I am deeply suspicious of the idea of acting or art as therapy, but Sammie’s ability to comprehend Shakespeare as solidly as a professional actor does imbue him with a significant emotional vocabulary.

I presume Tofte’s years of experience had built enough trust for that taunting to be positive—what he was taunting Sammie for was not being emotionally present enough in the speech.

Sammie is a successful computer programmer, and has a potentially bright future outside of prison if he is released, but he knows that his success in prison might be difficult to match as a free man, too.

In this Tempest, he plays Trinculo, the alcoholic butler who would usurp the place of the king.

Big G is another intriguing example. In his testimonial, he explains how the prison system mentors criminals to make them into more adept criminals, but that if one is lucky, a better set of mentors can be found, like Tofte and Shakespeare. He is cast by the group as Caliban, the monster of the Island who feels like his inheritance has been denied him. Big G killed an officer in a shoot-out when he was a drug dealer in his early twenties. He explains that he initially thought that criminals should make good actors because criminals have to be good liars—but his experience as an actor showed him that good acting is far more about the truth than lying. Identifying the Caliban in himself requires depths of self-perception, and humility. (Oscar Wilde noted, in his preface to The Picture of Dorian Gray, that some readers dislike Realism because of the ugliness of the realization that we are Caliban.) 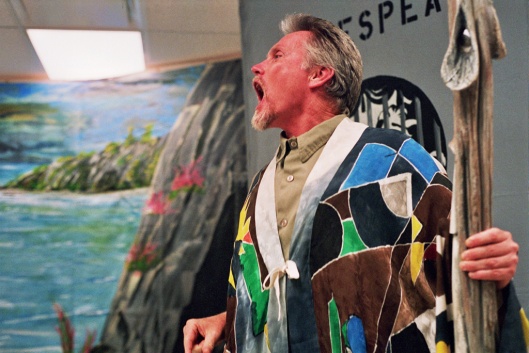 Hal, an older member of the group, is cast as Prospero, a man wrestling between a sense of rage and a desire for redemption.

Hal killed his wife. Hal shows himself to be incredibly sensitive, and reveals the crux of the questions I offered in the beginning of this review:

It’s taken me a long time to figure things out and to come to an understanding of who I am and why I did some of the things that I’ve done. It’s helped me to forgive myself, but some forgiveness doesn’t seem to be—to be—enough. It’s kind of—it’s kind of—it’s kind of hollow. I try to find deeper meaning—in my life and—this can’t be it. This can’t be what my life is all about, and what my actions have caused.

I am omitting several other stories because Shakespeare Behind Bars is too good to overshare before you’ve seen it. This documentary is better than most productions of The Tempest.

Shakespeare Behind Bars does not offer a definitive answer to the question of if these men are sufficiently reformed, if they can maintain their gentleness, vulnerability, and aspirational nobility in the outside world. The honesty, intelligence, and vulnerability of these men in trying to answer that question themselves is an honor to behold.