The Curator of Schlock #200 by Jeff Shuster

The Four Skulls of Jonathan Drake

How come he gets four skulls and I only get one?

Whoah! 200 blogs. What a long, strange trip it’s been. I remember when John King first approached me on writing this weekly column. We had arranged a deal. If I made it to 200 blogs, John King would give me his vintage, still sealed box of Mr. T cereal with the Mr. T stickers inside. A promise is a promise, Mr. John King. I will expect to be my Mr. Ts in the near future.

We continue our month of super scary movies here at the Museum of Schlock. Tonight’s feature is 1959’s The Four Skulls of Jonathan Drake from director Edward L. Cahn.

He’s the same guy who directed It! The Terror from Beyond Space. I covered that almost one year ago. Fancy that. We don’t have Martian monsters this time around, but we do have a witch doctor with a penchant for shrinking heads. It’s the little things that make life worth living.

The movie starts out with someone getting murdered. I think any movie that counts for anything starts out with someone getting murdered. Actually, before the murder, we witness a man by the name of Jonathan Drake (Eduard Franz), university professor and occult expert, alone in his study and transfixed by the shrunken head sitting in the palm of his hand. At that moment, Jonathan Drake sees three floating skulls in front him. They’re all transparent, kind of like ghosts. Ghost skulls! Floating ghost skulls! What could be scarier than floating ghost skulls? 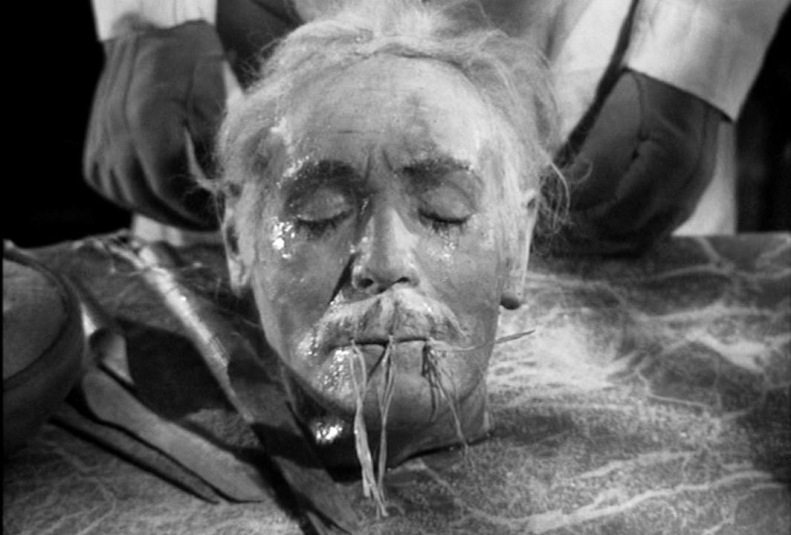 Next, we see Jonathan Drake’s brother, Kenneth Drake, attacked by some voodoo zombie. At least, that’s what it said online. I thought it was just some guy wearing pajamas. Sure, his lips are sewn together just like that shrunken head Jonathan Drake was so transfixed by, but I figured sewn lips was just a kooky fashion trend of the 1950s, like studded tongues or nose rings today. But nope, the guy is a zombie. He attacks Kenneth Drake by nicking his neck with a tiny sliver of bamboo. With that, Kenneth Drake falls dead. The zombie pulls out a blade to cut off Kenneth’s head, but scurries away when he hears the butler approaching.

What? Is the zombie afraid of getting caught? He could always kill the butler. The zombie has a nice, sharp knife to do some serious damage to anyone who gets between him and a severed head. This happens again later when he’s trying to cut off another head. The butler shows up and he runs away before getting his head.

Is this part of the zombie code? You never kill a butler? 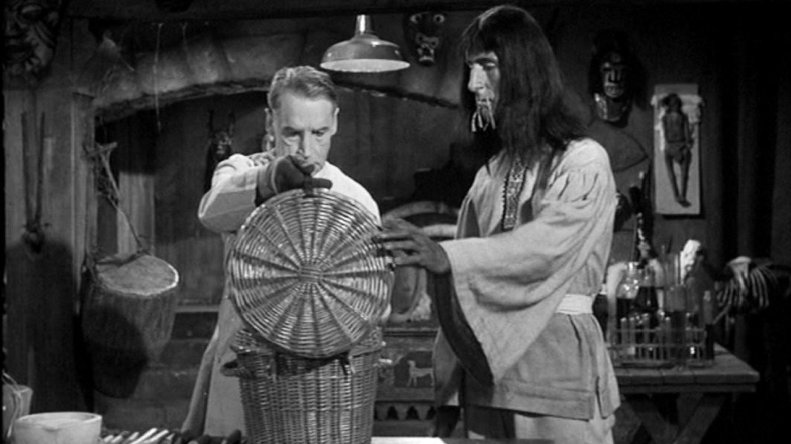 Oh, and the Drake family is under a hundred-year curse of sorts. I guess one of Jonathan Drake’s ancestors led an expedition to Ecuador where his party murdered a bunch of the natives. Drakes have been losing their heads every generation. 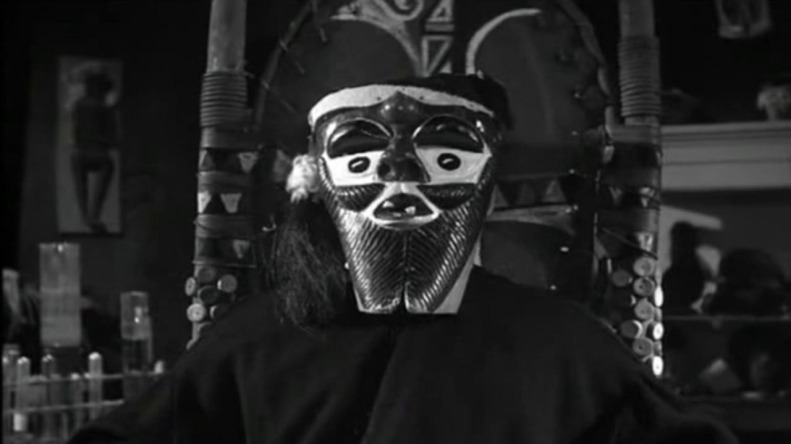 You can catch The Four Skulls of Jonathan Drake streaming for free on Amazon Prime.

It should have  been called The Thirteen Skulls of Jonathan Drake.

Then I could have covered it last week instead of a certain other movie.

1 thought on “The Curator of Schlock #200: The Four Skulls of Jonathan Drake”