Edward L. Cahn, It! The Terror from Beyond Space, NASA, racoons

The Curator of Schlock #159 by Jeff Shuster

It! The Terror from Beyond Space

Your curator had a nightmare the other night. In my dream, there was a raccoon tapping at my bedroom window. I tried shooing it away, but the raccoon got real angry, scratching the glass with its claws. Then it came back with a screwdriver and proceeded to crack the glass some more. And then a whole gang of raccoons started beating on the glass. My alarm clock saved me from seeing the conclusion, no doubt my being shredded to death by furry vermin.

I remember back in high school, I went to throw the garbage out, only to witness the contents of the can outside being scavenged by a bunch of raccoons. When I tried to shoo them away, one of them took a swipe at me.

An inch closer and I might not be writing this blog right now.

My point is: I don’t get the point of NASA. We have enough horrible creatures on this planet without venturing forth into the galaxy to discover new ones. I have enough problems with raccoons, jellyfish, and bumblebees without feeling the need to add more to the roster. Case in point, tonight’s feature: It! The Terror from Beyond Space, a 1958 gem from director Edward L. Cahn. This one features a crew on a spaceship being picked off one by one by a space alien.

Hmmmmmm. This movie seems familiar to me. It kind of reminds me of that movie Ridley Scott directed, The Martian. You know, the one where Matt Damon is an astronaut stranded on Mars where he has to “science the shit out everything” while he waits to be rescued. It! The Terror from Beyond Space also features an astronaut stranded on Mars. His name is Col. Edward Carruthers (Marshall Thimpson) and he is the sole survivor of a crew of nine. When the rescue spaceship lands on Mars, the crew takes him into custody, figuring he murdered his crew to get access to their rations. He claims that some alien killed the crew, so it’s unlike Ridley Scott’s The Martian in that respect. It also doesn’t feature a middle-aged Robin Hood and Maid Marian battling an invading French army so technically it’s unlike Ridley Scott’s Robin Hood, too. 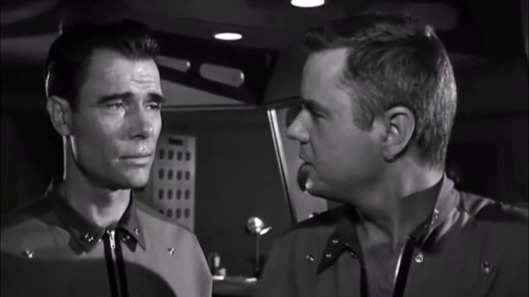 Anyway, this new crew figures Carruthers went space-crazy, making the creature up in his head to alleviate his guilt over murdering his spacemates. While watching this movie, I came to the conclusion that space travel may not be so bad. I mean you have these astronauts enjoying the comforts of a good game of chess while smoking cigars and drinking wild turkey.

I could think of worse ways to spend one’s time while traveling the stars. Like being horribly mutilated by the Martian monster that snuck aboard your spaceship while you were too busy reading the riot act to the man who murdered his crew, but claimed that a Martian monster did them in. And this Martian monster looks like a bit like a pigman. He’s got the snout and everything. 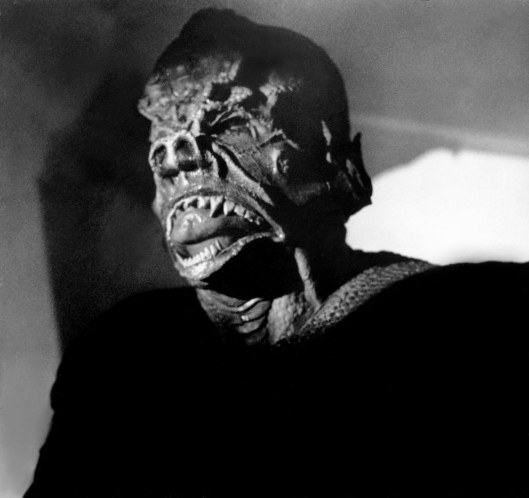 I think I spotted a raccoon outside my window.

1 thought on “The Curator of Schlock #159: It! The Terror from Beyond Space”